Doctor Who Story 014: The Web Planet 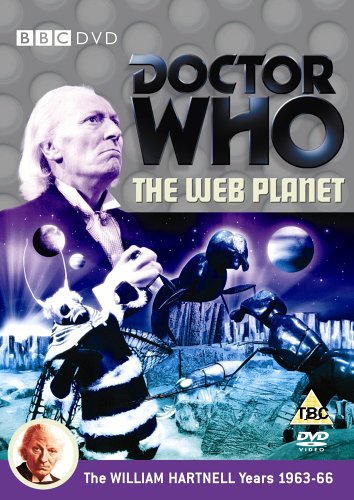 We've left ancient Rome and are now on another planet. This is where Doctor Who excels: the sci-fi aspects, where all sorts of fantastic alien creatures wreak havoc on our travellers. At least, that was the case until The Web Planet.

The Doctor (William Hartnell) and his Companions Ian Chesterton (William Russell), Barbara Wright (Jacqueline Hill), and Vicki (Maureen O'Sullivan), are taken to a mysterious planet, later learned to be Vortis. Here, the ant-like Zarbi have taken over, pushing out the moth-like Menoptra, who are planning a counter-invasion. Soon the travellers are caught up in the situation, with the Animus, a strange being who is using the Zarbi to take over Vordis.

In the six episodes (The Web Planet, The Zarbi, Escape to Danger, Crater of Needles, Invasion, and The Centre), we endured a continuing series of worse and worse aliens. It was as if there was a contest to see who could come up with the worst creature in a single story. The Zarbi at first I thought were among the worst Doctor Who monsters. They looked like men inside ant costumes, with their forearms (or forelegs) being totally useless. Then I saw the Menoptra. With their exotic moments (choreographed by Rosalyn de Winter) and odd speech pattern, I kept wondering if they had asthma. Finally, once I thought we'd hit the low point of silliness, we were treated to the Optera, whom I kept calling the Grub People. Given that we had a planet inhabited by ants and moths, slugs would then be almost natural. However, they just looked people in really, really silly costumes made up of blankets, slippers, and Rastafarian extensions. Their leader sounded like Animal from The Muppet Show, and I just thought the whole thing silly.

I think that on some level the actors must have thought Bill Strutton's story silly as well. This came to me in Episode Three, when the Doctor wants to speak to the Animus via its communication method. "Drop this hair dryer or whatever it is," he says. Now, there's nothing wrong in having the Doctor be a bit cheeky when facing against his enemies, but who exactly was he speaking to when he spoke this quip? If he can't take the story seriously, we can't either.

The Web Planet also suffers from a bit of repetition from previous stories, which I think were unintentional. In Episode One, the Doctor and Ian come close to being killed by what appears to be water but which is really poisonous. That seems similar to what they faced in Episode One of The Keys of Marinus. The travellers being used as slaves before leading the revolution? We've covered something almost exactly like that in The Dalek Invasion of Earth. It seems so strange that at only fourteen stories there is already a repetitiveness to Doctor Who.

Richard Martin's direction is quite contradictory as well. Visually it is quite artistic, but that artistry also creates difficulties. There is this gauze whenever they are on the surface (perhaps to hid the weakness of the sets) but twice the gauze inadvertedly covered the actor's faces, making them blurry. It almost looked as if Martin INTENDED Hartnell to be virtually masked in The Web Planet. The ants marching (thanks, Dave Matthews Band) look so amusing and comical, as does the Larvae Gun. In Episode Four Barbara looks like she's pumping a Larvae Gun like one would pump water.

Episode Three also has one of the most notorious flubs in Doctor Who history: one of the Zarbi crashes with a camera with such force we not only see the camera jerk back and up but HEAR it as well. The nature of 60s BBC television made a retake impossible, and it does add its own charm, but it does make the already unintentionally hilarious goings-on even more hilarious.

In short, not much in The Web Planet is either good or intelligent or interesting. It isn't to say there aren't good things in it. Some of Strutton's lines are quite beautiful, almost poetic. "History doesn't mean anything when you travel through space and time," the Doctor snaps at Ian. In Episode Five, one of the Menoptra says, "Light was our god, and we existed in light, flying above thought". We also have Catherine Fleming's performance as the Animus...or rather, her voice. She has a calm tone to this villain, making her both soothing and even more menacing. The actual costumes for the Menoptra are quite beautiful.

However, too much in The Web Planet was just so laughable that one wonders why the story was commissioned at all. Granted they made a good effort to try something new, but it didn't pan out. At six episodes, it was four episodes too long. Oh, what a tangled Web Planet they've weaved...

Next Story: The Crusade
Posted by Rick at 10:56 AM No comments: