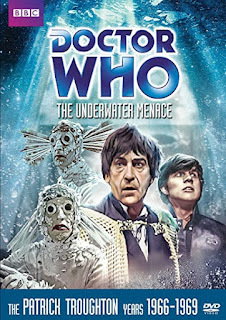 Author's Note: I had previously reviewed The Underwater Menace when only one episode was known to exist. After a second episode was rediscovered in 2011 the story was rereleased with photographic stills filling in the still-missing Episodes 1 and 4. This review will replace the original.

The Doctor (Patrick Troughton) along with his Companions Ben (Michael Craze), Polly (Anneke Wills) and Jaime (Frazer Hines) find themselves in the city of Atlantis. As the Atlanteans begin preparing to rise from the ocean's depths, there is danger afoot. That danger comes from the crazed mad scientist Zaroff (Joseph First). He has promised to raise the continent to the surface, but to do that he has to destroy the Earth itself.

Polly is forever trying not to be turned into a Fish Person, another product of Zaroff's who serve as de facto slaves. They are needed to harvest the food as Zaroff has never found a proper preservation method, so the Atlanteans food spoils quickly and requires quick harvesting. Jaime and Ben, meanwhile, have to work in the mines but plan to escape along fellow lost travelers Sean (P.G. Stevens) and Jacko (Paul Anil).

It is up to the Doctor and his Companions to stop the crazed Zaroff from destroying the world and Atlantis, with help from Ramo (Tom Watson), a temple priest who believes their story. Will the Doctor manage to save them all? 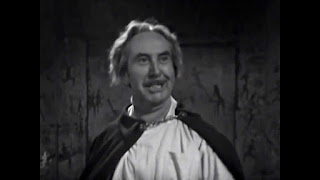 Given that half of The Underwater Menace is currently lost, perhaps we can cut it some slack. The fact that the BBC as a cost-cutting measure opted to have still pictures versus animated reconstructions also dampen the overall feel of the story. However, the lack of footage (and poor way the BBC went about reconstructing the story) are easy ways to excuse how bad The Underwater Menace ended up being.

At the top of The Underwater Menace's failure is in our villain. Furst's Zaroff does not chew the scenery or even devour the scenery. He demolishes it wholesale in a performance that really fits to the "needs to be seen to be believed" cliche. Coming across like a crazed Paul Lukas his wild overacting is simply astonishing but not in a good way. His intense declaration of "NOTHING IN THE WORLD CAN STOP ME NOW!" at the end of Episode Three is so unhinged as to transcend parody. It's a sad element that this is the last known surviving footage in The Underwater Menace: a crazed, wild-eyed loon screaming at the top of his lungs.

To be fair, that is how Furst played Zaroff from the get-go. Say what you will about his bonkers mad scientist (and no, that isn't a repetition in terms), Furst goes into the role with unhinged abandon. It isn't until Episode Four where he finally sounds slightly less insane. If The Underwater Menace is to be believed, Zaroff was perfectly aware that the Earth's surface was going to be destroyed if he was successful.

He really lived out the REM song It's the End of the World as We Know It (And I Feel Fine). He insists that all scientists really aim to destroy the world, opening up the logic of knowing he was OK was dying to blow it all up. That makes his pleas to be saved at the end of Episode Four all the more bizarre. If he has a death wish that has no explanation other than "because I can", why is he so terrified of dying when the waters come rushing in? 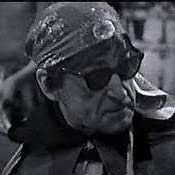 Add to that what The Underwater Menace did to poor Polly. Forever screaming, she was nearly turned into a Fish Person, abducted, held prisoner and did some more screaming. I think Wills did the best she could but it must have been rather difficult to be relegated and shunted off in such a fashion.

Again, at least to a degree Polly's shoddy treatment is not writer Geoffrey Orme or director Julia Smith's fault. Hines' character of Jamie was added after The Underwater Menace had already been written, so he was hastily added in. That meant relegating the other Companions a bit to the sidelines. It also meant giving Hines lines that probably would have been spoken by either Wills or Craze. None of the actors are to blame for all this, but the end result is sad and jumbled.

Troughton, for his part, does appear to come into his own even in the gaudy outfits. He becomes a mix of wizard and schemer, attempting to stop a crazed man while bringing a touch of lightness to things. In Episode Four he says, "I have a plan. It might even work," making the line simultaneously amusing and serious. Troughton does well in this story, balancing the serious and silly very well.

However, he too could not save a script that had so many wheels spinning. The subplot about the Fish People, the miners and the worshipers of the Atlantean god Almo came and went. Important characters like Atlantean maiden Ara (Catherine Howe) came and went to where you forgot about them until they reappeared.

It is curious that despite seeing the wires the Fish People sequence is still on the whole fascinating. I give credit to The Underwater Menace for trying for something unique and visually arresting. The sets, especially at Almo's Temple are also quite impressive even if they reminded me of the First Doctor story The Aztecs.

Next Story: The Moonbase