The Genesis of The Master. Doctor Who Story 055: Terror of the Autons 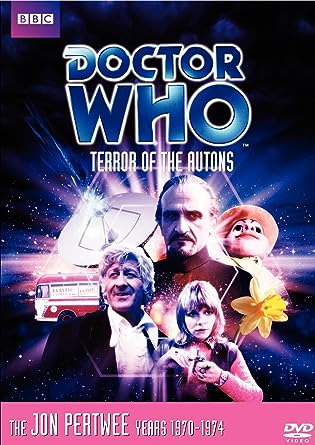 STORY 055: TERROR OF THE AUTONS

Terror of the Autons, the first story of the Third Doctor's second season, has so much new in it.  It has a new Companion; it has a new menace who will become iconic.  It also has the return of the Autons, who were the first monsters the Third Doctor faced off in his first story.  Terror of the Autons has one or two flaws (and they're a bit hard to look past): the special effects that now make it look rather clumsy and cheap and it suffers in comparison to its predecessor.  Minus that though, the four part story holds up beautifully and introduces both the very good and the very evil into the Doctor Who mythos.

The Doctor (Jon Pertwee) is still in exile on Earth, and though he's doing the best he can by being the 'scientific advisor' to UNIT, he still yearns to fix his dematerializing unit and use his TARDIS to travel through time and space again.  Between his last adventure and now, Liz Shaw has elected to go back to Cambridge.  In conversation about her departure, The Doctor's friend/irritant Brigadier Lethbridge-Stewart (Nicholas Courtney), repeats what she supposedly said, that the Doctor only wanted someone who would hand him his test tubes and tell him how great he was.   The Brigadier has arranged for a new Assistant, a pleasant and cheerful girl who is a member of UNIT, Miss Josephine 'Jo' Grant (Katy Manning).  The Doctor is highly displeased that someone who isn't as bright as Shaw has taken her place, but despite himself the Doctor doesn't have the hearts to fire her.

Meanwhile, strange things are occurring in a circus.  A strange figure dressed in a black Nehru jacket has materialized.  He introduces himself as The Master (Roger Delgado), and with his powers of hypnosis soon takes control of the circus.  However, he isn't there to be the ringmaster of the greatest show on Earth.  He's there to use it as part of a nefarious plan to take over the world.   He steals the translucent polyhedron unit that UNIT so foolishly loaned to a museum.  This technology was from the battle against the Nestenes taken after the events of Spearhead From Space.

The Doctor is angered by UNIT's casual manner with this technology, but he isn't alarmed when a Time Lord appears warning him that The Master is on Earth.  "An unimaginative plodder," the Doctor says dismissively.  However, since 'their last encounter' (indicating they have a past), the Master has grown more dangerous.

The Master now has taken over a plastics factory, pushing the weak-willed Rex Farrell (Michael Wisher) into making a new type of plastic.  The Master will now create his new Auton Army, joining him in an alliance with the Nestene to take over the world.  Anything made out of plastic can now be a weapon in the Master's arsenal, including chairs and telephone cords.  The Master has temporarily hypnotized Jo, almost getting her to kill the Doctor, UNIT Sergeant Benton (John Levene) and new UNIT member Captain Mike Yates (Richard Franklin).  However, with the Doctor's help, she recovers.  He also takes the Master's dematerialization unit from his TARDIS, but it won't work on the Doctor's model.  However, it does (unknown to the Master) force the Master to remain on Earth since now HIS TARDIS won't work either.

The Doctor now is on the hunt for The Master, and the Master is one step ahead.  The Master eliminates Rex's father via a monstrous troll doll that can come alive, and now plans to aid in the Auton invasion by bringing chaos to the world via plastic daffodils that will kill thousands.  The nation, so thrown into confusion over these 'random' deaths, will not be prepared to handle the invasion.

The Doctor, with Jo's help, has gotten wind of this plan, forcing the Master to move the invasion forward.  However, in the end the Doctor makes the Master realize that to an Auton, they will see no difference between human and Time Lord.   They make a last-minute alliance to reverse the invasion, but the Master escapes in the battle between UNIT and the Auton army.

In the end, the Doctor is not displeased that his old nemesis has escaped.  Far from it.  He's actually looking forward to it.


In any ranking of the best Doctor Who stories of all time, you will always find Robert Holmes' name on at least one in the Top Ten.  Holmes, who created the Autons, brings them back for another brilliant turn (though sadly, they were not to be seen again until, curiously enough, NuWho's very first episode, Rose).   The Autons themselves are among the Great Doctor Who monsters, so it is extraordinary that even someone as brilliant as Robert Holmes managed to top himself by creating The Master, always a perennial in any Greatest Doctor Who Villains/Monsters List.

The Master came about when script editor Terrance Dicks and producer Barry Letts noted that the Doctor and the Brigadier were much in the mold of Sherlock Holmes and Dr. Watson.  That being the case, they needed a Moriarty, and they could not have come up with both a better villain and better actor to play the role.  With apologies to Anthony Ainley, Eric Roberts, and/or John Simm, as far as I am concerned there will be only ONE Master, and that is Roger Delgado.   The others work very much in Delgado's shadow, for he gave the best performance of everyone in Terror of the Autons.

I joke that he needed only a black Nehru jacket to show he was evil, but there was more to that in Delgado's turn.  Delgado's Master was suave, sophisticated, and most importantly never hysterical.  He had a calm and cool demeanor that allowed him to easily control and manipulate almost everyone that came his way.  Even when the Master and the Doctor finally meet in Episode Four, we see that Delgado can play at a traditional villain motif (the out-of-control ego) and make it believable.  "You are my intellectual equal," the Master taunts his fellow Time Lord before adding, "well, almost."   Even when dispatching people to their deaths (and the Master certainly kills people) with his tissue compression eliminator (a parody of the Doctor's sonic screwdriver which shrinks people to death rather than heals as the Doctor's device does) or even by pushing them off high towers, Delgado never hams it up.  Instead, in his cool and rational demeanor, Delgado shows that the Master is an extremely efficient but dangerous being.

Pertwee appears to be the complete opposite to Delgado's suave and detached manner.  He's short with people, prone to snap at those who either do things wrong in his eyes or get in his way with bureaucratic bungling.  However, underneath that Pertwee shows the Doctor as also kind and protective.  We see him build rapport with his new Companion in Terror of the Autons, where we go from the formal "Miss Grant" to the endearing "Jo" by the end.  We see that the Doctor is a good guy in Episode One, where after ranting about how the new girl (who inadvertently had ruined an experiment when she stopped a fire) was not up to snuff, he falters and welcomes her softly when presented with the terrible prospect of having to fire her himself. 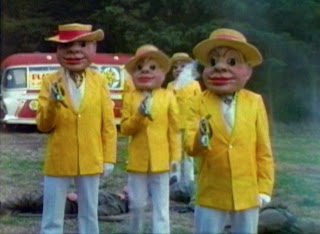 Similarly, Katy Manning's Jo Grant proves instantly successful and endearing as the new Companion.  She is a very kind, sweet, loyal, and brave girl.  Her genuinely caring and gentle disposition should not be thought of as making her either dumb or weak.  Far from it: despite orders to remain at UNIT HQ, she goes and follows the Doctor to the circus and was able to help rescue him.  She is sweet but not dumb, more naïve, eager to help and eager to learn.

The other actors: regular, new cast members, and guest stars were all brilliant.  Courtney owns the role of the Brigadier, as does Levene as Sergeant Benton (although sadly he wasn't as much in the story).  The more dominant part was for Franklin and Captain Yates (pulling rank, perhaps).  The script appears to be attempting to build a budding romance between Yates and Jo,

Robert Holmes also came up with some wonderfully witty lines.  In Episode One the Master tells the weak Mr. Farrell, "Don't worry about him.  You're under a new thumb now."  When he is asked who he is, The Master replies, "I am many things," which brings to mind (wittingly or not) the idea of the Devil, who also goes by many names.  Holmes even allows for moments of humor to come in.  In Episode Four the Doctor calls out desperately for the Brigadier as the Master has manipulated the plastic telephone cord to start strangling the Doctor.  The Brigadier yanks the cord from the wall, eliminating the Master's control over it.  "Afraid I cut your connection," the Brigadier tells an astounded Doctor with a perfectly straight face and not a drop of irony.  It is clear the Brigadier clearly missed the joke and was completely unaware of how it sounded.

In terms of plot Terror of the Autons holds up very well: the story builds slowly and gives us moments of great fright.  A man being smothered to death by a plastic chair has to rank among the most gruesome deaths on Doctor Who.  In fact, the story was quite controversial.  Police objected to when a couple of police officers, who appeared to come to the rescue, turned out to be Autons coming to kill Jo and the Doctor.  Police feared that children would not seek their help, fearing that the police officers too were actually alien invaders.  As part of the plot, an ugly troll doll is activated to kill.  Dicks, Letts, and Holmes (according to Dicks) made every effort to make it clear that this was not a nice doll, but Dicks tells how, after Terror of the Autons' broadcast, children refused to sleep with their teddy bears, terrified that they would come to life and strangle them while they slept.

About the only flaw in the story is how it ends rather quickly, a mere suggestion that the Autons might not be as friendly to The Master as he thinks they might be sends him switching sides almost immediately.

In terms of other aspects, it is clear that the special effects do not hold up as well as the story itself.  Certain scenes are immediately apparent that they took place in front of a green screen.  Bits with the ugly troll doll (in particular an embarrassing moment in Episode Three when the doll is suppose to be 'attacking' Jo but was clearly just tossed at Manning) now look almost amateurish.  One bad aspect that isn't special-effects related is the appearance of a Time Lord dressed like an upper-class English gentleman (complete with derby).  His literal popping in has to be among the worst intros in the series' history both Classic and NuWho).  It comes across as almost comical (the Doctor certainly saw it that way) and is a bit bungled in my view.

Apart from these small missteps that date the story, Terror of the Autons holds up well, and introduces both a charming new Companion and one of the most legendary Doctor Who villains in the series' history.  It almost makes the Autons irrelevant, but it is obvious that this plastic will be preserved as among the best of the lot.

All right, I'll say it...this life in plastic, it's fantastic!