A Wolf In Daleks' Clothing 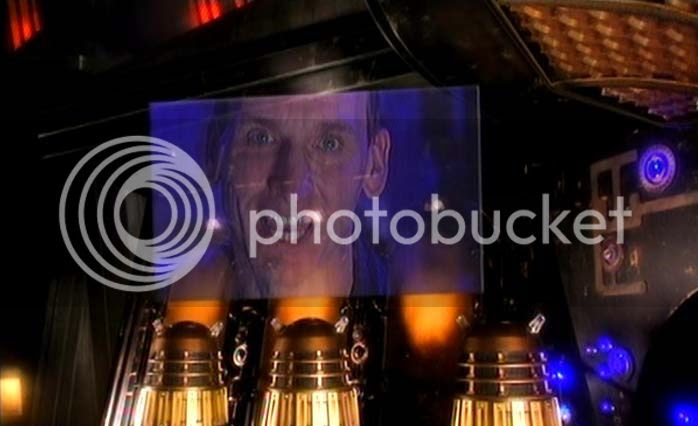 We find that The Long Game is the present-day version of what Mission to the Unknown was to The Daleks' Master Plan: a prequel to the larger story (in this case that of Bad Wolf 1 & 2).   After a recap of The Long Game, we're thrown into a cavalcade of confusion: the Doctor (Christopher Eccleston), Rose (Billie Piper), and Captain Jack Harkness (John Barrowman) have all been separated and land on various television shows, respectively Big Brother, The Weakest Link, and What Not To Wear.  Each react to their situation in their typical manner: the Doctor is irritated and annoyed, Rose thinks the whole thing is funny, and Jack is just delighted to show off his "amazing" body.  Of course, not everything is as it seems.  Each show has a twist: eviction means extermination, being voted 'the weakest link' means extermination, and altering your looks means literally altering the way you look.

The Doctor realizes that the Game Station he's in is really the former Satellite Five from The Long Game.  He escapes the Big Brother house, along with housemate Lynda (Jo Jayner), and while Jack manages to escape himself, they arrive too late for Rose, who in her attempt to escape the Anne-Droid, gets vaporized.  But lo!--this is not the end of Rose (side note: could it ever truly be?).  Rather than get exterminated, she finds herself surrounded, and soon the Doctor, Jack, Lynda, and the Programmers aboard (Jo Stone-Fewings and Nisha Nayer) discover who is holding them and the population of Earth hostage...THE DALEKS!

This group, ruled by the Dalek Emperor, managed to fall through space at the end of the Great Time War, and His Majesty has been harvesting humans to create his new Dalek Army, ready to invade and destroy Earth.  The Doctor, however, will have none of that: he tells them he's going to rescue Rose and destroy the Daleks, all without a plan, or weapons of any kind.

The Doctor and Jack land on the Dalek mother ship and rescue Rose, and the Doctor has come up with a way to destroy the Daleks once and for all via a Delta wave, destroying every mind in its path (though that could include the humans too).  However, the Doctor is far too loving to truly threaten the Daleks, until Rose inspires an idea for him...or so we think.  Keeping his pledge to protect Rose, he sends her off to safety, much to her agony, and she returns to London to be greeted by her erstwhile boyfriend Mickey (Noel Clarke) and her mom Jackie (Camille Coduri).  As the Doctor and Jack continue to fight off the Dalek Army, Rose is frustrated about remaining at home, until she hits on the idea of looking into the TARDIS.  Once she manages to do that, she absorbs the energy from the TARDIS, allowing her to go back to the Dalek mother ship.  It should be too late: both Lynda and Jack have been killed by the Daleks, and the Doctor is just out of time.

Once there, she has god-like powers: with a wave of her hands she evaporates the Army and brings Jack back to life, but the intensity of the TARDIS energy is destroying her mind.  With a kiss, the Doctor absorbs the energy for himself, and once back on the TARDIS, the Doctor tells Rose he is changing.  To her horror, the Doctor regenerates into a whole new man (David Tennant).

Right from the get-go Bad Wolf Parts 1 & 2 has a major problem.  Part 1 is dependent on the audience knowing certain things, primarily the three shows being spoofed: Big Brother, The Weakest Link, and What Not to Wear.  If you (like me) haven't seen one or any of those shows, you really have no idea what is going on.  Until Bad Wolf, I hadn't even HEARD of What Not to Wear, so while I understood the gist of the show (and could even guess that the two hosts voiced their robotic doppelgangers), anyone else who wasn't a viewer would feel a bit lost.

Another issue I had was a bad habit of current Doctor Who that should be called the Rory Syndrome: killing off a character just to find that he/she really isn't dead.  Here, we witness what we think are the deaths of both Rose and Jack, only to find that they aren't really dead or conversely, have been granted immortality.  You can't really build sadness for a character's end if said character doesn't really end.  If I remember correctly, for a moment we thought Rose was dead in Dalek, and while it worked that time I think it didn't go over that well in Bad Wolf Part 1.  What I wondered was if Rose, in her god-like state, can bring life, did she bring back only Jack or everyone else on board?  It would have been possible to have restored all the humans slaughtered by the Daleks (except Lynda, whose death was both tragic and extremely well-done cinematically).

Finally on the minus side, I kept wondering about how it was possible for the Daleks to survive the Time War but there being absolutely no chance whatsoever of the Time Lords themselves being exterminated.  If Russell T Davies allowed the Daleks to survive, what precludes a small group of Time Lord exiles to have escaped?  Even Aeneas survived the fall of Troy.

Now, placing our eyes on the positive, some of the acting in Bad Wolf Parts 1 & 2 is among the best of the first series.  Once you get over a lot of the comedy from the warped versions of the various shows, I found Jayner's Lynda to be a sweet, almost naive girl.  If Rose hadn't lived (which would have given the story more depth), Lynda would have made a wonderful Companion.  As stated earlier, her death at the plungers of the Daleks was extremely chilling and brought a real moment of terror and sadness, given she was a very nice person.  Eccleston was, to quote him, fantastic, both when playing grumpy at the Big Brother House and when as a hologram he appears to Rose as part of Emergency Programme One and when at the end of Part 1 he declares his intentions to the Daleks.

Piper has earned her place as one of the best Doctor Who Companions with Bad Wolf Parts 1 & 2.  In this two-part story watch her transform from the girl who isn't taking The Weakest Link seriously to the terrified girl held captive by the Daleks to the determined woman moving TARDIS and Earth to rescue the Doctor.  Piper has an evolution to her character, and I believe put to rest once and for all the idea that she is just a 'pop star' who was given the gig to get ratings.  Rather, she projects an entire catalogue of emotions: fear, love, courage, all within a very young character.

It truly is hard to determine if Barrowman was playing a character or just being himself as the egotistic Jack.  I know a whole mythos has been built around our Captain Jack, but for my part I've never warmed up to our intergalactic nymphomaniac, so I would make him the weakest link (pun definitely intended).

Joe Ahearne creates some beautiful moments along with getting good performances out of his actors.  When Rose is believed dead, he surrounds the Doctor in black, enhancing the poignancy of the moment.  Visually, when Rose is obliterating all enemies is also a beautiful moment.  The best moment in Bad Wolf is in Part 2 when Lynda is killed (I keep going back to that, but in the silence of the moment, seeing the Daleks outside the Satellite with their lights blinking out what we already know they are saying makes it more chilling).

I do question whether it was important for Rose to reveal the truth about her and her father to Jackie, figuring that maybe this could have remained between her and Pete, but there it is.  I also never figured out why that particular phrase, "bad wolf", was so important.  If Rose just got it from when she destroyed the Dalek Emperor and spread it across time and space, then it didn't originate from her mind, did it.  Right?  Am I missing something?

Well, now we've reached the end of the 9th Doctor's tenure, and we will have a retrospective on him: the best and the worst (yes, there were bad things in Series/Season 1).  However, that's for another time.

Bad Wolf Parts 1 & 2 has some wonderful performances and in a perverse way give me hope that the Time Lords are actually still around: what's good for the Daleks... I had some problems with Part 1, less so with Part 2, which is a switch: normally the first episode is brilliant while the second one falls apart.  It gets point knocked off for suffering from the Rory Syndrome, but on the whole, we can say they cried us a good wolf.

Next Story: The Christmas Invasion
Posted by Rick at 9:18 AM No comments: