The Extended Universe of The Doctor 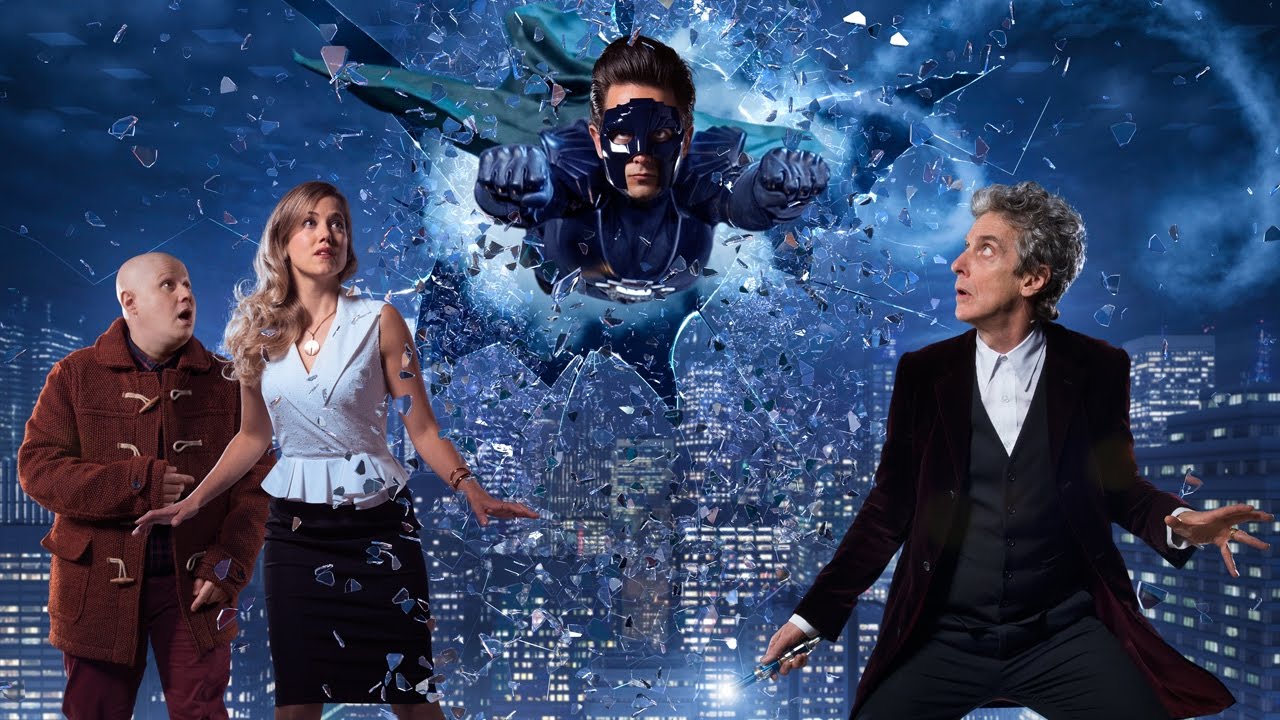 STORY 266: THE RETURN OF DOCTOR MYSTERIO

The Return of Doctor Mysterio is the only new Doctor Who story that 2016 will have, the show being on 'hiatus' since the last Christmas special and not scheduled to return until April 2017.  I imagine that this homage/send-up of superhero stories will be enough to stop the downward slide Doctor Who has entered.  I didn't hate The Return of Doctor Mysterio.  I didn't love it either.  It was a non-event, a retread of things we've seen before spoken in other voices, other rooms.

The Doctor (Peter Capaldi) is in New York City and meets a little boy named Grant, who has a cold.  The Doctor is working on some machine that does something and Grant has spotted him.  The Doctor gives him a glass of water that he pulls out of his coat, a red capsule-looking object and says 'take this', then seems genuinely surprised when Grant tells him he swallowed it.  This object grants the being anything he/she/it wants the most.  We find that Grant wants to be a superhero like the ones he reads about in comics.

Many years later, the Doctor, along with his temporary Companion Nardole (Matt Lucas), whom we met in The Husbands of River Song, are back in NYC, investigating the Harmony Shoals Company.  Here, he meets plucky journalist Lucy Fletcher (Charity Wakefield), who also suspects there's something sinister at Harmony Shoals. As the villain threatens them with a gun, enter The Ghost (Justin Chatwin), a Superman-type who speaks like Christian Bale's version of Batman.  Everyone is shocked at his appearance, and after temporarily disabling the villain, The Ghost takes Lucy in his arms and flies her away.

The Ghost is really Grant as an adult, who attempts to balance his superhero duties with his main job: a nanny.  Not just any nanny, but nanny to Lucy's child.  Grant can fool everyone, with his soft manner and glasses, but not The Doctor, who knows immediately who The Ghost is.  Who else in NYC has superhero powers thanks to him?  The Doctor is displeased that Grant is using his powers despite Grant's promise not to, and even a flashback where in middle school The Doctor again counsels him not to doesn't help.  It does help us find that Grant has always been in love with Lucy but too shy to approach her.  Whether SHE remembers Grant at all is unclear.

The villains are a nefarious alien group made up of literal brains, who are stealing bodies as part of an invasion of Earth (anyone yawning at this point?).  The Doctor and Nardole begin disrupting Harmony Shoals' worldwide plan (in Tokyo, he unleashes Pokémon in the lobby) and Nardole proves surprisingly adept at piloting the TARDIS (with a brief, accidental stop in Byzantium, where he somehow ruled as Emperor, complete with robes).

Grant/Ghost has a hard time balancing his two worlds, running back to Lucy's flat every time the baby starts crying, and Lucy is completely unaware that Grant is The Ghost.  At a rooftop interview the romantic vibes are going when the villains show up.  They want The Ghost's body, the perfect place to place the master brain I guess.  The Doctor and Nardole, for their part, are on a spaceship trying to stop an invasion...that has already happened.  The spaceship is a Reichstag Fire-type incident, which will destroy New York and have world leaders scurring to Harmony Shoals for protection, where they'll have their brains replaced and thus, conquest.

The Ghost manages to stop the crashing spaceship, even if it means revealing his true identity.  Lucy doesn't care...she's in love.  The Doctor and Nardole for their part, are off again, the Doctor still deep in mourning for his favorite slut, River Song.

I understand Mark Gatiss, who has written for Doctor Who and works with Moffat as co-creator/writer/actor on Sherlock (a show I find similarly overrated and exaggeratedly praised), cried when he read The Return of Doctor Mysterio.  I wonder if he cried out of laughter or at the shock of finally seeing what he and Moffat had done to Doctor Who.

Doctor Who was once science fiction.  Now it's just farce.

Doctor Mysterio wasn't awful in a Husbands of River Song or Sleep No More way.  It just wasn't anything really.  Too many critics are giving Doctor Mysterio a pass because as a Christmas special, they argue that it should be lighter, almost irrelevant to any other story.  I argue that while a Doctor Who Christmas special can be lighter, it still is part of Canon and should be treated as any other Doctor Who story regardless of season.

There is a fine line between homage and rip-off or even send-up, and Doctor Mysterio is flat-out a rip-off of Superman: The Movie.  I will grant that I figure Moffat (and those watching) were fully aware of this.  However, the entire rooftop interview, complete with Lois Lane, eh...Lucy Fletcher (or her nom de plume, Lucy Lombard) was virtually stolen from Superman.  It shows a total lack of originality because Moffat didn't play with the conventions, he didn't try for anything new.  Instead, he figured it would be easier to just recreate the scene virtually verbatim (I was waiting for Lucy to start singing Can You Read My Mind?).

Superman took its time to establish the overall mythos of The Man of Steel.  Doctor Mysterio didn't have that luxury, OK, so it was easier to lift so much from Superman with the expectation that the audience would know the references.  This is curious since perhaps there was someone like The Doctor, who was unaware that Superman & Clark Kent (openly mentioned in Doctor Mysterio) were one and the same, and had apparently never heard of Spider-Man.

How curious that the 10th Doctor was well-versed in pop culture (the ending of Harry Potter and the Deathly Hallows made him cry), but the 12th (in 14th Form per Kyle Anderson at The Nerdist) has never heard of Superman, or Spider-Man, or the film Alien from Last Christmas.

Was The Return of Doctor Mysterio meant to be a spoof of Superman?  At times it played like that (when The Ghost is being interviewed at a fire, he ends by practically leaping out of the television screen, points his fingers, and shouts, "So, GET A SMOKE DETECTOR!" in a camp way that is a little cringe-inducing).  Over and over again, Doctor Mysterio was too enamored of being Doctor Who: The Superman Edition to be Doctor-centered.  As is the case with much of current Doctor Who, the Doctor himself was not the central character.

It is Grant/The Ghost and his love story with Lucy, which again isn't all that interesting given we've seen it before and seen it done much better.

It is also a bit of a puzzle how The Ghost doesn't immediately recognize the Doctor when he's seen him twice, or how Lucy doesn't put the Ghost and Grant together, not because Grant wears glasses, but because their voices are eerily similar.  If we go into Superman: The Movie's Clark Kent/Superman, Christopher Reeve made that distinction believable because his whole manner of being when he was Clark Kent (bumbling, insecure, timid) was wildly different than when he was Superman (strong, confident, powerful).  Clark even moved differently: head close to his chest, as if trying to hide, while Superman stood tall and erect.  There wasn't all that much difference between how Grant and The Ghost were, so it wasn't that hard to put two and two together.

The voice again is what bothered me.  Justin Chatwin's voice was not that different from when was Grant and he was The Ghost, so I wondered why Lucy couldn't get it.  Then again, Lucy, from what the story presented, thought The Ghost wasn't real, so when he smashes into Harmony Shoals was the first time they had actually met.  Still, there wasn't that much deviation in Chatwin's voice (a very strong baritone, a touch gravelly), so why didn't she at least wonder.  Lois Lane to her credit in Superman and Superman II at least wondered if Clark and Superman were the same. 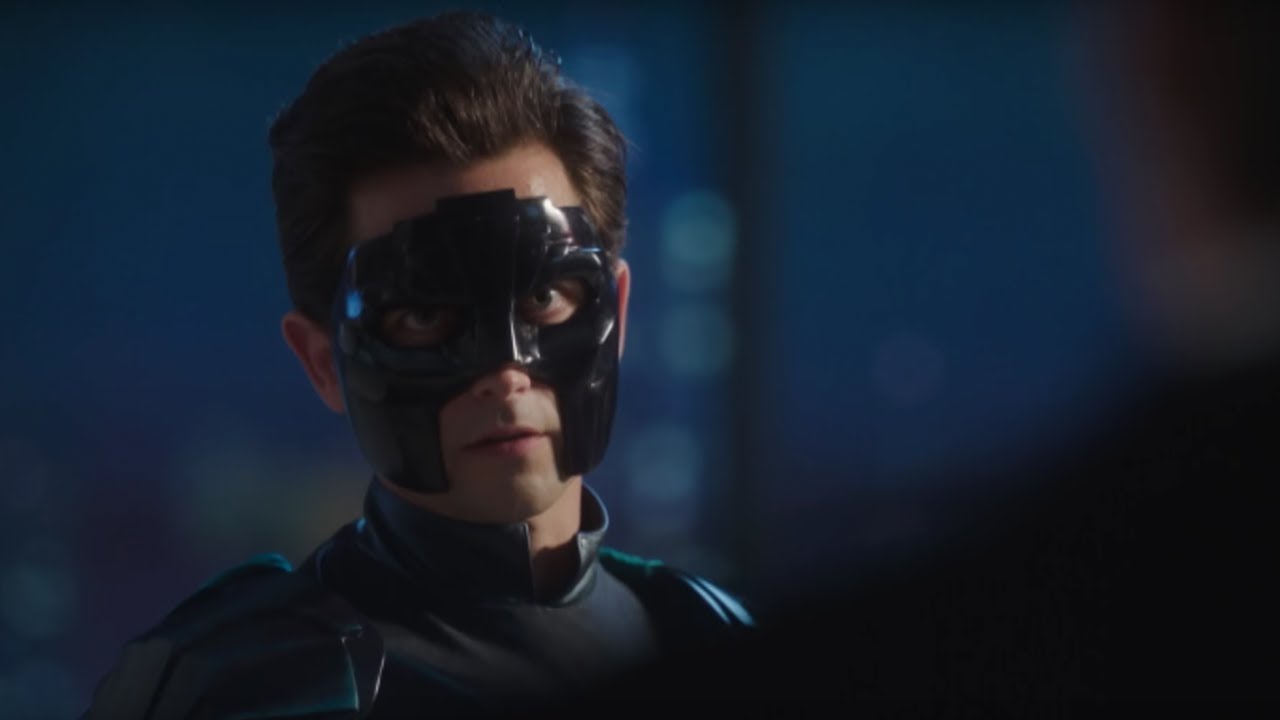 The performances were acceptable, nothing that was incredible.  Chatwin made for a competent Superman/Batman knock-off with 'typical' powers, though as Grant he was flat and uninteresting.  Wakefield was also acceptable as the reporter who was nothing more than the love interest.  Lucas is not someone I care for, but Doctor Who at least made a wise decision in toning his uber-idiot Nardole down from his last appearance in The (Many) Husbands (and Wives) of River Song.  Surprisingly, Nardole managed to pilot the TARDIS quite well (given he's still a bit of an idiot/comic relief) and was actually much smarter as a Companion than some of The Doctor's previous ones (looking at you, Rory "Pond").

As a side note, how did Nardole manage to pilot the TARDIS so well?

We still had to have him dressed up as a Byzantine Emperor for no other reason than to have a 'funny costume' and had to throw in pop culture references that will date the show immediately (a little Pokémon Go nod...in a few years when that fad wears out and people forget it, viewers of The Return of Doctor Mysterio will have to go online to find out what they're talking about).

The alien menace never felt as if it were a genuine threat for two reasons.  One, we've seen it all before (alien invasion of Earth...seriously, can they come up with nothing else).  Two, the Grant/Ghost-Lucy story was the one they really cared about, so the aliens seemed a bit of an afterthought, as if they needed to be there because Doctor Who should have some extra-terrestrials in it.

We got the Doctor creating a machine in the beginning for some reason, but what happened after Grant took the device that granted him powers we know not; in fairness to young Grant, any child would have mistaken the device as medicine given the Doctor gave him a glass of water and instructed him to 'take this' as opposed to 'hold this'...and that glass of water business being pretty dumb to begin with.

Guest star Capaldi did what he could, making the Doctor a bit of a frantic yet slightly dimwitted figure (he snacks on sushi while casing Harmony Shoals, just because he wants a little snack, and is apparently unaware that New York City isn't a capital.  It takes Nardole to point that out to him).

The Return of Doctor Mysterio is nothing special, nothing original. Repetitive of past Doctor Who stories (alien invasions, smarter Companions, the Doctor as secondary player in eponymous show, even with a "Doctor Who?" line that Moffat clearly cannot resist), of Superman: The Movie (scenes and bits of dialogue lifted from the film), it is forgettable, disposable, and with hints of future returns that may not pan out (a shout-out to the lousy character of Osgood and one of the aliens taking over a UNIT member's body, though when and how...irrelevant).

Ultimately, The Return of Doctor Mysterio is...nothingness itself.  A better title for this special would have been Doctor Who in Superman Meets Invasion of the Body Snatchers.

Next Episode: The Pilot (formerly A Star in Her Eye)
Posted by Rick at 10:59 AM 1 comment: