Doctor Who Story 030: The Power of The Daleks 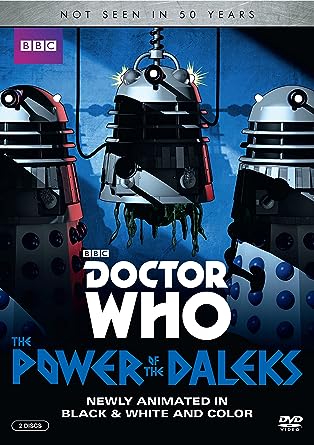 STORY 030: THE POWER OF
THE DALEKS

The Power of the Daleks is not known to have any existing prints as of this writing, which is a great tragedy as it is the first story of Patrick Troughton's Second Doctor.  This is perhaps one of the most important stories in Doctor Who, as it would allow for that transition between actors that would be later known as 'regeneration'.  Now we have the animated reconstruction of The Power of The Daleks, and we see that it is a brilliant debut story, if perhaps at six episodes, a bit long.

Ben Jackson (Michael Craze) and Polly (Anneke Wills) are shocked to find a strange new man in front of them.  Polly is convinced this new man whom they saw change before their eyes is 'The Doctor', but Ben is not.  The Doctor (Troughton) is acting strangely, wearing funny hats and playing a recorder.  He also insists on going to explore where they've landed, and soon they find themselves thrust into a murder mystery.

The Doctor finds a dead body, whom he finds is 'The Examiner', sent to examine something.  He has no problem removing the dead man's badge, and is soon struck from behind.  Guards pick up Ben and Polly, and the three are taken to meet with Governor Hensell (Peter Bathurst).  The travelers discover they are on Vulcan, probably named for the high amount of high heat activity going on, and everyone on Vulcan is supposed to give the Examiner complete access.

However, one person is not eager for interruptions: Lesterson (Robert James), conducting his very careful experiments.  It isn't long until The Doctor discovers what Lesterson's experiments are for.  It is to revive strange objects he has found in a lost spaceship. 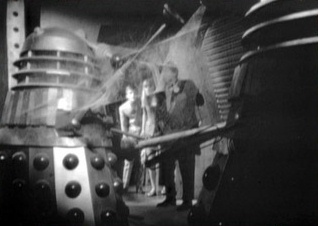 The Doctor introduces Ben and Polly to the Daleks.

The Doctor pleads with everyone on Vulcan to destroy these creatures, but Lesterson is convinced they will help in the mining on Vulcan.  He is especially convinced of that since he 'gave them life' and because the primary Dalek says to them, "I Am Your Servant".

If all that wasn't enough, there is revolution and coups going on around Vulcan.  Deputy Governor Quinn (Nicholas Hawtrey) is suspected of murder and attempted murder, but the travelers don't believe it.  Polly is abducted to try and keep her quiet, and Ben is later taken when Lesterson's assistant Janley (Pamela Ann Davey) is discovered to be majorly involved with the rebels.

The rebels, however, are being manipulated by acting Deputy Governor Bragen (Bernard Archer), who is playing both sides in an effort to take total control of Vulcan.  Lesterson is oblivious to all this, but his focus on reviving the Daleks is causing greater danger.  He agrees to give the Daleks all the materiel they want, ostensibly to help revive them but really to help create more Daleks.

With this new Dalek army arising, they will let the humans fight each other and then take Vulcan, exterminating all the surviving humans foolish enough to think they could either use the Daleks or think they would ally with them.

The Doctor now desperately tries to destroy the Daleks and save his Companions.  He gets help from an unlikely source: Lesterson, who has discovered the Daleks' duplicity which has driven him mad.  Hensell is assassinated by Bragen and the 'revolution' has begun.  Bragen's plan was to use the revolution to seize power, then eliminate the rebels once their usefulness ended.  The Daleks were a last-minute addition to his plan, but the Daleks in turn took the opportunity to play both sides against the other.

The Doctor manages to destroy the Daleks by overloading their power source, with help from Valmar (Richard Kane). a rebel mole who sees how they've all been played.  With the traitors killed and the Daleks apparently exterminated themselves, the Doctor and his Companions leave before they are seen.

There is one Dalek, however, who appears to have survived. 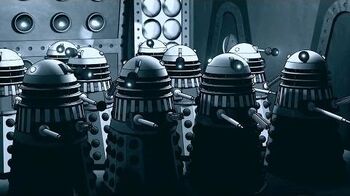 The Power of the Daleks was an incredibly intelligent way to begin the Second Doctor's tenure as it attract viewers to perhaps the show's greatest villains.  Who else but The Doctor could face off against the Daleks, making their first appearance since The Daleks' Master Plan?

The fact that the Daleks appear to recognize the Second Doctor as THE Doctor helps.

The animated reconstruction I think also helps to show how epic this story was.  At the end of Episode Four, where we see the massive number of Daleks appearing and their assembly line-like creation, it is both chilling and a sign of how the production values at the time could be expanded.

In the surviving clips from The Power of the Daleks, we can clearly see that most of 'the Daleks' were really cutouts or toys, but the animation allows for a larger scope.  Even the sight of a Dalek outside its metal casing is still quite effective.

It's a bit hard to judge performances given the circumstances, but the audio suggests that Troughton was indeed a very worthy successor to William Hartnell, whom he was replacing.  He was still sort of feeling his way around the role, his incessant recorder playing and goofy hat sometimes diminishing his stature.  However, he also was very strong and authoritative when he was pursuing his own goals.

Troughton showed the deviousness and intelligence of this apparent clown, such as when he keeps trying to make his glass of water 'ring' while locked up.  This is driving his next-cellmate Quinn crazy, but it is clear why the Doctor is doing it: he realizes the locks are triggered by a specific decibel, and the water is his way of trying to find the exact level to free themselves. Craze and Wills had a slightly harder time, as they as the audience identification had to work to make their shock and eventual acceptance of this new figure as The Doctor as smooth as possible.  David Whitaker's script was wise in having them essentially play two sides of this debate.  Polly is more readily accepting that this new man is The Doctor, while Ben holds out for a longer period of time.

I do think that it was a mistake to have Troughton's Doctor refer to himself in the third person.  In the beginning, he says things like 'where does The Doctor keep his diary?' and things like that where he says 'The Doctor' rather than "I".  Eventually this was dropped and perhaps it was to make this all more mysterious but it made things a bit bumpy in accepting him when he didn't appear to accept himself.

Moreover, there was never a definitive moment when the Doctor just said "I Am The Doctor", and I think perhaps we could have had a scene where the Companion's doubts, especially Ben's, were addressed.  Granted, all this was new in 1966, so we do cut them some slack.

The other performances were quite good.  Of particular note is James as Lesterson, who goes from crazy about the Daleks to just plain crazy.  His shift from seeing himself as the 'resurrector' of the Daleks to seeing them as the new order that would wipe out the humans is in turns frightening and sad.  Archer's power-mad Bragin is also quite strong, a man who is unmasked as evil.

Hawtrey's Quinn may have been a bit more noble than I would have liked, but it is still a good performance, as was Davy's Janley.  Maybe it's a sign of the times, but I would have cast Davy as maybe Lesterson or Bragin, to see what a woman could do with a role that wasn't an 'assistant'.

Whitaker's script also did something that might not have been intentional.  The Daleks are a variation on Nazi ideology: their will to power, their plans for 'extermination' and belief in their total superiority and the destruction of their 'inferiors'.  What was new here is that Bragin and his troops had on very fascist-looking uniforms.  I don't know if they meant to echo collaborators who surrender to the Nazi/Daleks, but it was a smart move. 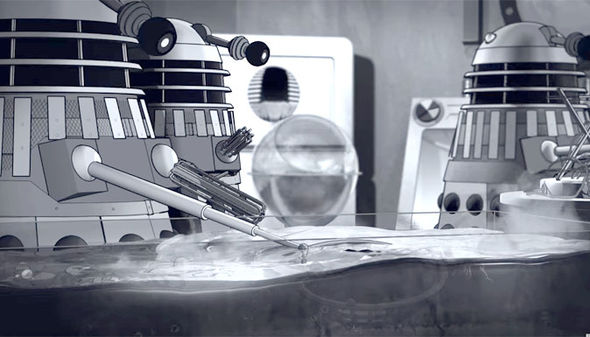 As for the animation itself, it mostly worked.  Whenever they were animating non-humans, it was astonishing and beautiful.

I should note I saw the black-and-white version, not color.

As stated, the sight of the Daleks, or when we see shadows and the various rooms, is so well-rendered.  The transitions from the Dalek eye to a round window in Episode Four is also extremely effective.

It is when we see the humans that we see the work is almost ghastly.  Of particular note is the animation for Michael Craze's Ben.  His chin is massive and it looks nothing like Craze.  Craze's face looks almost ghoulish.  Wills' illustration was slightly better, as was Troughton's.  However, for the most part the animated faces had little expression, giving the odd effect of looking as if they were not reacting.

Moreover, the movements were more in line with paper cutouts than of anything truly animated.  The animation for another Troughton story, The Invasion, was more realistic with the human characters.  Yet I digress.

In terms of the overall story, I still think The Power of the Daleks was an episode too long, especially given that the Dalek attack was one to two episodes when I would have liked to have seen more.  I think Episodes One and Two could have been compiled into one, but I confess never being a fan of stories that over four episodes with a few exceptions such as Inferno or The Daemons.  Still, The Power of the Daleks is one of the best debuts for any Doctor, and a fine way to begin the Second Doctor's tenure.

In Episode Five, a Dalek asks Bragin after he's killed the Governor, 'Why do human beings kill human beings?'  It's sad that Daleks appear to have more sense in not destroying their own than we do*.

Next Available Story: The Underwater Menace

*Unless there is an animation reconstruction of The Highlanders in the future, where we meet future Companion Jamie McCrimmon, we move on to the earliest Second Doctor story to have a complete episode. Note that the linked review for The Underwater Menace was before a second episode was rediscovered in 2011.  A review for the reconstructed The Underwater Menace is forthcoming.
Posted by Rick at 12:53 PM No comments: