Two Of A Lost Kind 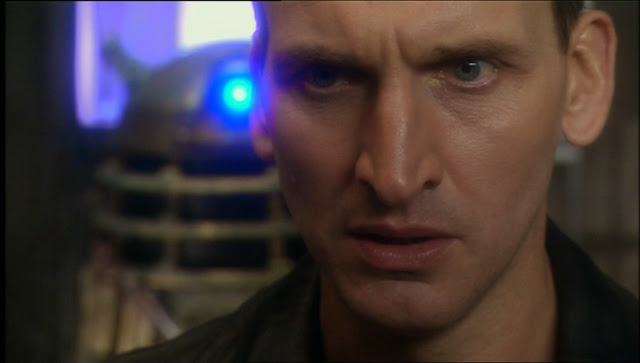 There was a suspicion that The Doctor's most famous enemy would not be appearing in the revived Doctor Who. This situation was further exacerbated when we have the revival explain that the Doctor is the last surviving Time Lord, his people being destroyed along with all the Daleks at the end of the Time War. How could the Daleks come back if all of them had been destroyed along with all Time Lords? As far as we could see, the Daleks were finally themselves exterminated. However, now we find in Dalek that at least ONE Dalek survived...

The Doctor (Christopher Eccleston) and his Companion Rose Tyler (Billie Piper) receive a distress signal that leads them to the deep bowels of an underground museum in Utah, United States. There, they discover a hidden museum full of alien artifacts. Quickly discovered, they are taken to Mr. Van Statten (Corey Johnson), a billionaire genius who "owns the Internet" and has been collecting space artifacts in order to gain profit from them. He has his own scientific advisor, a British kid named Adam Mitchell (Bruno Langley), whose main job is to find the artifacts and figure out their uses. There is one piece in his collection that is Van Statten's pride and joy: a mysterious object he calls the Metaltron. The reason the Metaltron is so important is because unlike the others, it is alive. Van Statten forces the Doctor to have a look at it, and the Doctor realizes that it is the Metaltron that has been sending the distress signal. He also realizes that it is in fact, a Dalek--the Last of the Daleks who somehow survived the Time War between the Daleks and the Time Lords.

This Dalek cannot fight back, but Van Statten realizes that the Doctor himself must be alien and takes him prisoner. Meanwhile, Adam and Rose are bonding, and she persuades him to show him the Metaltron. She feels genuine sorrow for it, especially when the Dalek tells her that he "feels pain". She reaches out and touches it, and soon the Dalek transfers her DNA to himself, allowing him to free himself and strike back at those who've been torturing him. With the Dalek now loose and causing death and destruction, the Doctor gets Van Statten to release him and attempt to seal the Dalek off. They do manage that, but while Adam manages to save himself, Rose is left behind to face extermination. The Dalek, however, cannot bring himself to kill her. Her DNA, it appears, not only brought him back to full power, but has altered his own nature to where he takes on emotions unknown to Daleks: such things compassion and mercy. The Doctor is now hell-bent on rescuing Rose and killing off the Last of The Daleks, but in the end Rose makes him see that the Dalek isn't the one putting her in danger...it's The Doctor. Once the crisis is over, Van Statten gets what's coming to him and a reluctant Doctor takes Adam in the TARDIS.

Dalek is brilliant to tackle some of the criticisms the iconic monsters have had thrown at them since 1963-64. The most famous of the criticisms is the fact that its shape makes it difficult to move anywhere that doesn't have a flat surface. I think writer Robert Shearman put in that scene specifically to answer the charge that the best way to escape a Dalek is to run up a flight of stairs. The ensuing revelation of how a Dalek can move makes the moment even more terrifying, and it's a credit to The Mill that now we have the technology, we have the capability to create the world's first fully-flying Dalek (to misquote another program) to realize the full potential of the Daleks. We also get a nod to their distinctive design. Near the middle of Dalek, the monster lifts its plunger-shaped arm. The armed guard working at it scoffs. "What you gonna do? Sucker me to death?" Bad question to taunt the Dalek with.

Beyond the special effects aspects in Dalek, director Joe Ahearne created some especially sharp visual moments. When the Doctor first enters the Metaltron's chamber, we don't see much. Ahearne builds the tension by introducing elements slowly in the scene: that humming, that single blue light hovering, that staccatto voice.

Shearman and Ahearne also tap into the unresolved war between the Doctor and the Dalek. As the last of their kind, they find themselves continuing the war that brought an end to both their civilizations. However, we see an evolution in both the characters: the Dalek (thanks to Rose's DNA) is becoming more conflicted and even with individual longings of its own, while the Doctor is becoming more aggressive, more vengeful. Dalek does a fine job of maintaining the tension between these two aggressors who for most of the episode are actually kept apart. In fact, in Dalek they never actually fight each other.

Both leads are in top form in Dalek. Eccleston conveys both the anger and pain he feels as the last of the Time Lords, raging to where he literally spits out when screaming at the Dalek, and also showing something rare for this Doctor: sheer terror when he realizes he's in a locked chamber with a Dalek. He goes through so many emotions within Dalek, and Eccleston manages to maintain the range without going over-the-top either in the pathos or the fury. The best performance, however, is that of Piper. She has a soft vulnerability as Rose and conveys such tenderness to a big pepper pot that it becomes almost a tragedy. It is Rose that is the true heart of Dalek, because Piper projects the full sadness of destroying life, either physically or in an emotional sense. When she confronts the Doctor at the end, the scene is quite moving.

Langley does a good job coming off as a bit of a twit and a coward in Dalek, which is what the character of Adam was. In a smaller role, Jana Carpenter as soldier DeMaggio has a great scene guarding Rose and Adam. It is curious to see anyone tell a Dalek to surrender, but she in her brief scene creates both a strong and scared woman. Great credit should also go to Nicholas Briggs' voice work as the Dalek in Dalek. His Dalek voice is called to show more emotion due to the cross-pollination, and he manages to do that. When Briggs as the Dalek tells the Doctor, "You would have made a good Dalek", it's quite chilling. My only complaint in terms of performance is with Johnson's Van Statten. I kept wondering if he was suppose to be a bit campy and more comedic than straight. Johnson's grinning and excessive self-confidence didn't play like he was a real person but more a parody of a billionaire.

I also have an issue with the Money Motive. This is the third time (The End of the World and ALIENS OF LONDON being the first two) where financial gain is at the heart of the crisis. Granted, I,'m an unashamed capitalist, so I may be on the opposite side of the issue, but I do hope to have another reason for the villain's motives. Finally, how I detest the stubborn refusal to even suggest that other Time Lords may have survived. I don't know why they keep locking that door. Would it have killed them to say that, yes, perhaps, just as this Dalek survived, maybe some Time Lords did as well.

A curious note. According to Dalek, the Dalek crashed on Earth fifty years ago. The date given for Dalek is 2012, which meant that the Dalek came in 1962, which is one year before The First Doctor met the Daleks in the seven-part story collectively known as The Daleks. If one took a too-nerdy approach to all this, it would mean that Gallifrey was destroyed a year before the First Doctor came to London with his granddaughter Susan. It is far too much to think about trying to make sense of it all, so we'll just let it go.

Dalek is a strong story where the Dalek is shown to be the real terror it always could be rather than an object of ridicule. Eccleston and especially Piper brought moving performances to Dalek, showing that in war, there truly are no real victors. There were some light moments that didn't overwhelm the story, and on the whole, Dalek will not be exterminated from any Best Of Collection.