Doctor Who Story 024: The Celestial Toymaker 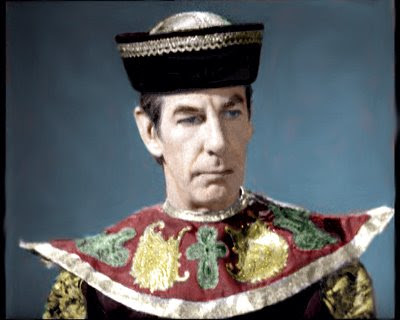 
Someone's Playing Games With Us...

This is certainly a sad case.  The four-part story known as The Celestial Toymaker has only one episode known to be in existence: Episode Four (The Final Test).  That one episode is all that remains of the first appearance of Michael Gough in Doctor Who. Although he did return in Arc of Infinity Gough was never to recreate his title villain.  He was set to return as the Celestial Toymaker in The Nightmare Fair but the story was scrapped when Doctor Who went on hiatus in 1986 and was replaced by the season-long The Trial of A Time Lord.  (Side note: curiously, although The Celestial Toymaker was to appear only once his influence is still felt today, but more on that later).

It's a curious thing about Gough.  Most people know him as Alfred Pennyworth from the Tim Burton film Batman and its three sequels (Batman Returns, Batman Forever, and Batman & Robin).  As Alfred, he's a very good guy.  The curious thing is that for most of his career, Gough was better known as a villain: from the Hammer Horror films through Berserk! with Joan Crawford and here.  He had a stern, powerful voice and strong screen presence that denoted evil, so seeing him as the title villain may be a bit of a surprise to Batman fans who know him as the kindly valet to Bruce Wayne.

On the minus side, as stated only Episode Four is known to exist.  On the plus side, even though only one of the four episodes remains (or at least remains for the present), that one episode is still pretty strong, with good acting and an interesting villain.

The Doctor (William Hartnell) has disappeared and been rendered mute by the Celestial Toymaker (Gough), an immortal being who creates his own world and has captured the Doctor and his Companions, Dodo (Jackie Lane) and Steven (Peter Purves).  The Doctor must play the Trilogic Game (where he must deconstruct and reconstruct a pyramid made up of ten pieces within a certain number of moves from Point A to Point C and with the lower piece always being larger than the one above it).  Meanwhile, Dodo and Steven must play a series of games set up by the Toymaker in order to recover the TARDIS.  If they lose, they remain in this world forever as the Toymaker's playthings.  If they win, the world they occupy is destroyed...along with them.  By the time of The Final Test the Doctor has made a series of moves and is close to finishing the Trilogic game, while Dodo and Steven face their greatest adversary, a large man resembling a child who goes by Cyril (Peter Stephens) whom they've encountered before as the Knave of Hearts and a kitchen boy in the preceding episodes.

Cyril makes them play hopscotch but always rigs the game to his advantage.  Eventually, Dodo and Steven manage to win but the Toymaker has one more trick up his sleeve: the Doctor at the nearly-complete Trilogic game.  The Doctor outwits the Toymaker, but with the threat that he may return.  In triumph and safe in the TARDIS, Dodo gives the Doctor some of Cyril's sweets, and after one bit he hunches over in pain...

Now, as for the story itself, The Celestial Toymaker appears to be a rather good story based on the villain: a being who is immortal, evil, and highly intelligent.  At the center of what elevates The Celestial Toymaker is Gough's performance.  He is a being who relishes the ability to match wits with someone of high intelligence, which the Doctor certainly is.  Unlike the bumbling Meddling Monk, the Toymaker can be taken quite seriously in his deadly intentions.  Unlike the Daleks, the Toymaker has no interest in world domination.  He merely enjoys the challenge of capturing others and forcing them to play his deadly games.  In short, Gough is a master of villainy, and in The Celestial Toymaker he gives a great performance of someone who uses his superior intelligence as opposed to brute force to get his way.

I also have to compliment Stephens' performance of Cyril.  He was perfect as an annoying schoolboy-type who cheats his way to the top.  Curiously, the end of Cyril, although not shown, is still rather gruesome.  It's a credit to The Celestial Toymaker (and especially director Bill Sellars) that while the horror of Cyril getting it at the end is not graphic, the remains are still a bit jarring.

I also compliment Daphne Dare's costuming, particularly of both Cyril and the Toymaker himself.  He has this Imperial Chinese-style robe that makes him look elegant yet otherworldly, while Cyril is more a naughty British schoolboy.

Now, even within The Celestial Toymaker, as good as the surviving episode is, some things just can't be fixed.  In this one episode Dodo still appears to be totally stupid--you would think after three games she would have gained some sense in how to deal with someone like Cyril.  The fact that she still can't get it right makes Dodo exceptionally stupid, annoying, and goes a long way to explaining why she is still one of the Worst Doctor Who Companions.  Steven, no MENSA master himself, isn't much better--always growling through every part of the TARDIS hopscotch.  Perhaps this is how they were directed, and while Lane and Purves did better work than in The Ark, they still don't make the best couple.

Despite being incomplete, The Celestial Toymaker is still a strong influence in Doctor Who.  In Amy's Choice, the character of The Dream Lord was so much like that of The Toymaker that I was not the only one that speculated whether or not it WAS the Toymaker making his revenge...I mean, return appearance.  I don't know if that episode consciously drew from The Celestial Toymaker, but it is strange that both characters would have the Doctor play games in order to survive.

Overall, The Celestial Toymaker is elevated due to Michael Gough's brilliant turn as the title villain.  Even though only one episode survives, there is no reason why the first three (The Celestial Toyroom, The Hall of Dolls, and The Dancing Floor) should not be reconstructed.  HOWEVER, I understand that in Episode Two, The King of Hearts recites the nursery rhyme "Eeny meeny miny moe" with an unacceptable word in it (even in 1966 it should not have aired).  The audio release has the narration cover up this word, and should it ever be reconstructed this is one time I would not object to having it edited out.  Sign of the times, unfortunately.  However, the story itself (officially credited to Bryan Hayles but with extensive work by both Donald Tosh and Gerry Davis) still holds up well and moves to a solid ending (minus the Doctor's toothache--bad way to end).  However, in the end, it is good to see The Dark Side of Alfred Pennyworth.

Next Story: The Gunfighters
Posted by Rick at 9:24 PM