Yes, Spouses Can Be A Little Ood 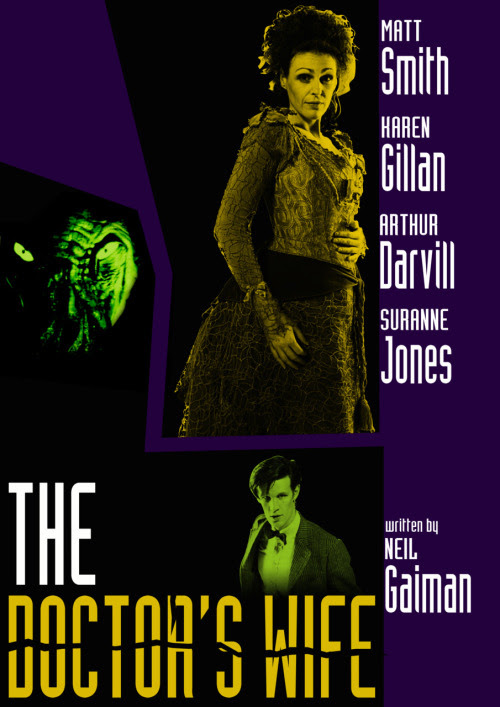 Although the Doctor (Matt Smith) has had children and grandchildren (or at least a daughter and granddaugther), he's never had a wife...until now.   However, trust the good folks at Doctor Who to make even the simplest of things extremely complicated.  The Doctor's Wife comes from comic book/science-fiction icon Neil Gaiman, so it is bound to be good, and it is.  However, there are some things that this series simply can't get away from.

The Doctor (Matt Smith) receives a distress signal...from a Time Lord.  He is not surprisingly thrilled...perhaps there WERE some survivors of the Time War and he is not the Last of the Time Lords.  With that, he flies the TARDIS outside the universe, to what appears to be a junkyard.  There, he encounters four beings: Auntie (Elizabeth Barrington), Uncle (Adrian Schiller), an Ood called Nephew (Paul Kasey), and a disheveled woman named Idris (Suranne Jones).  The Doctor misleads his Companions Amy Pond (Karen Gillan) and her husband Rory Williams (Arthur Darvill) into going back to the TARDIS while he seeks out The Consair, his old Gallifreyan friend.

Bad move on two points.  The Consair is truly dead, as are other Time Lords who survive only in messages within boxes.  Second, the asteroid they are on is really a living thing, called House (voiced by Michael Sheen), who lives off the energy of TARDISes (or would it be TARDI?).  With The Doctor yet again the last of the Time Lords, guess who is after the TARDIS?  As it stands, Idris is not like Auntie, Uncle, or Nephew (all who are made up of various parts, including pieces of Time Lords--lo, how the mighty have fallen), isn't like all the others.  She in truth is the TARDIS  in human form.

House has taken the TARDIS, threatening Rory and Amy.  To extend the story...I mean, to keep themselves alive, Rory and Amy challenge House to toy with them before killing them, leading to an old Doctor Who standard: running down corridors.  During the chase, Amy and Rory are continuously separated, and at one point Amy comes across what appears to be Rory's bones (this will be important later).  The Doctor and Idris, meanwhile, build a TARDIS console made up of pieces from other TARDI/TARDISes to rescue his Companions.  The Doctor and House 'meet' in the old console, and it takes Idris' sacrifice to save them.  In the coda, Rory tells the Doctor Idris' last words: "the only water in the forest is the River"...foreshadowing.  Da-da-DUM!

The Doctor's Wife has a great inventiveness to it with great nods to the whole Doctor Who mythos.  By setting the entire thing in a junkyard, it is highly reminiscent of the very first Doctor Who story An Unearthly Child.  Whether Gaiman also threw in a nod to the Doctor Who cliche of having people running down the same corridors I do not know, but seeing Rory and Amy doing just that evokes memories of that.

The story is also highly creative in giving a Doctor Who icon a voice for a very first time.  In all the years of Doctor Who, we've never considered the TARDIS (with a few exceptions) as anything more than a mode of transportation.  With The Doctor's Wife, we now see the breath of the TARDIS' power.  Gaiman's script also has a great deal of humor that never comes at the expense of the tragedy or horror of the story.  The Doctor tells Idris, for example, to send a telepathic message to "the pretty one".  Not surprisingly, she would pick Rory as "the pretty one" (Idris being a woman, she WOULD pick Rory to be the 'pretty one').   There is even a quick joke about Smith's chin.

Part of the success of The Doctor's Wife comes from the performances, in particular Jones' as the manic, almost looney Idris (side note: Gaiman's script has great wit in the names.  Idris, TARDIS--how close they are, right?).  In her quirky, somewhat nutty interpretation of Idris, she appears to be mimicking Smith's Doctor in his oddity, rapid movements, and generally quirky behavior.  I keep flipping on Matt Smith: sometimes I love his interpretation of the Doctor, sometimes he annoys me in his twittering mannerism.  It depends I suppose on the story.  In The Doctor's Wife, Smith balances his usual wild take on the Doctor with a genuine heartbreak at how the Time Lords yet again have disappeared from his world.

Another strong performance comes from Sheen (whom I generally love as an actor except in the Twilight films, where I found he made his 'vamp' camp).  To his immense credit, he has only his voice to work with as House, and he could evoke menace with the proper inflection without making House a raging lunatic.

There are many great things in The Doctor's Wife, but some things I objected to greatly.  Chief among them is a throwaway line.  When the Doctor was telling them about the tattoo the Consair always had at every regeneration, he said the Consair had it whenever himself, 'or herself, a couple of times', regenerated.  That would appear to establish that Time Lords can change genders, and this kind of dialogue is dangerous business.  Recall The Deadly Assassin: a simple line established that Time Lords regenerate only twelve times, and now we have that as established mythology.  With this, we now have a situation that might appeal to fans (oh, the Doctor can be a woman, Romana can be a man), but we have something I don't think people think out: Time Lords, apparently, are now hermaphrodites.

I have long argued that Time Lords are single sex beings: a male Time Lord will always be a male Time Lord, a female Time Lord will always be a female Time Lord.  By having Time Lords be either, we have this situation where the control of their regeneration is completely in their hands.  That being the case, if the Doctor regenerates as a man, it's because he wants to.  Therefore, why hasn't he simply regenerated with ginger hair, seeing he wants it so much?  Furthermore, we can't have things thrown at us and quickly forgotten.  The TARDIS still makes the 'whoosing' sound, even though the Legendary Legend of Legendness, DOCTOR RIVER SONG (who mercifully isn't in this episode), already established that the sound is only made because the Doctor parks the TARDIS without taking out the brake.  It wasn't funny then, it isn't funny now (and I would have thought Idris would have told him how much that hurts her...if it were a real thing and not just a cheap joke).

Granted, this may all be a bit nitpicky, but why shouldn't I take writers and producers to task for such things?

I also thought House wasn't all that powerful of an adversary.  He devoured TARDI for his own power beyond the universe (side note: it did make me think of E-Space, but I digress) but he didn't really have as strong an impact as other monsters (though having the asteroid as the living thing was a stroke of genius).  The presence of the Ood wasn't all that important: Nephew could have been any creature if one thinks on it.

Finally, I'm instituting the Official Rory Williams Death Count.  This simple service will keep track of the number of times Mr. Amelia Pond has died on screen, both in the individual episode and the series as a whole.  Here is where we have a question: did Rory Die Again?  This could go either way: we didn't see him die (unlike all the other times) but Amy did come across a corpse that we took to be Rory.  It was all done so quickly I'm almost tempted to not count it as an official Rory Williams Death because this was the first time he didn't actually die on screen.  However, given how we're suppose to believe that the bones Amy comes across are suppose to be Rory, I'll have to count it as yet another example of how poor Rory never seems to complete a series/season without kicking the bucket.

Side note: I'd love to see a scene where Rory literally kicks a bucket.  Might as well have more jokes on his perpensity to drop dead every few episodes.

The Doctor's Wife is one of the best episodes of Series/Season Six, one with a good mix of horror and humor.  However, I can't overlook a few things, especially how it gave me hope there were still some Time Lords only to rip that from me almost as quickly.  "You gave me hope and then you took it away.  That's enought to make anyone dangerous," the Doctor tells Auntie and Uncle on discovering that his fellow Time Lords were being used for spare parts.  I couldn't have found a better way of describing the revived series myself.

In episode (ONE)
Overall (FOUR)

NEXT STORY: The Gangers Parts 1 & 2 (The Rebel Flesh/The Almost People)
Posted by Rick at 9:18 AM