Doctor Who Story 037: The Tomb of the Cybermen 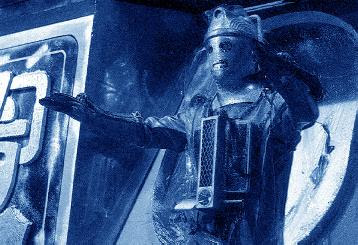 STORY 037: THE TOMB OF THE CYBERMEN

One Tomb Many Cybermen...

The Tomb of the Cybermen is the first complete Second Doctor story known to exist, the first story to feature Victoria Waterfield as a full-fledged Companion, and the only complete story with Victoria known to exist.  It is also the first complete Cyberman story, given that their debut story The Tenth Planet and their return in The Moonbase both are incomplete.  The Tomb of the Cybermen however, is not just historic because of those stats.  It is also one of the best Doctor Who stories, and certainly one of the best Second Doctor and Cyberman stories around.

Immediately following "the final end" of the Daleks in The Evil of The Daleks, The Doctor (Patrick Troughton), his Companion Jamie (Frazer Hines) and the newest Companion, Victoria (Deborah Watling) now arrive on the planet Telos.  They come just as an archaeological expedition is taking place, one that has already cost one of the expedition members his life.  This expedition, headed by Professor Parry (Aubrey Richards), is on Telos looking for the fabled Tomb of the Cybermen.  This race disappeared 500 years ago, with no sight of them.  Here on Telos, Parry suspects we may find their remains.

The Doctor, having already faced off against the Cybermen twice, is highly alarmed at the suggestion that this group will try to find anything related to them, so he quickly gets himself to be the de facto head of the expedition.  He and his Companions come just as the expedition is about to open the fabled tomb.  While the experienced Parry and the forever fretful Viner (Cyril Chaps) are interested in the science and history behind the lost world of the Cybermen, not everyone shares in their passion.  Instead, expedition financier Kaftan (Shirley Cooklin), her assistant Klieg (George Pastell) and her bodyguard Toberman (Roy Stewart) have their own secret agenda.

Once we learn exactly what it is, it is a shocking one.  They intend to find the lost Cybermen and revive them from their slumber so as to use them to conquer Earth!  It is only after Toberman has disabled the rocket ship of Captain Hopper (George Roubicek), forcing the expedition to remain on Telos, that we learn Kaftan and Klieg's nefarious plan.  Of course, things involving the Cybermen will never be as simple and clear-cut.

The Cybermen themselves have created this tomb as a trap, freezing themselves until a civilization intelligent enough to open it came along.  Rather than be the muscle to Kaftan and Klieg, the Cybermen instead plan to 'convert' all the expedition to Cybermen and then use them to conquer Earth.  Now, the Doctor must stop both Kaftan & Klieg and the Cybermen.

The Tomb of the Cybermen brilliantly echoes the archaeological find of the 20th Century: the discovery of Pharaoh Tutankhamen's tomb, and in a subconsious manner recycles all those legends of explorers foolish enough to enter forbidden tombs.  However, while co-writers Kit Pedler and Gerry Davis echo many 'lost tomb' stories, they created a brilliant twist: while having the financiers of the expedition try to sabotage the purely scientific endeavours for their own purpose, they find that THEY are the ones being used by the Cybermen.  This raises the stakes for everyone in Tomb, creating an added level of danger and risk since the Doctor now has to fight both the Cybermen and the gruesome twosome of the Brotherhood of Logicians.

One of the best things in Tomb is that Pedler and Davies build on the two previous Cybermen stories, referencing them in the four episodes of the story.  It is beginning a continuity with the Cybermen that I suppose is being echoed in the NuWho stories with their myriad of plots and stories, although we have yet to make the Cybermen the Who icons that they will become.  However, it is smart to illustrate that the Doctor has encountered them before so as to keep things in some order.

In some ways, the characters are all rather stock.  You have the nervous Nelly of Viner, the gruff Captain, the sincere archaeologist, the sinister femme fatale and her smooth-talking accented aide, and the mostly silent muscle.  However, The Tomb of the Cybermen allows for this because it is open (no pun intended) about how this story is about opening a mysterious chamber except that it is in outer space.

Director Morris Barry never allows any slack in his pacing for Tomb.  In fact, the flow is amazingly fast.  No one really notices that the Doctor is not the actual head of the expedition but he soon is giving out orders.   Barry also should be congratulated in getting each of his actors to make their characters less cliched than the story presents them and give them positive aspects (except perhaps for Kaftan and Klieg who don't have redeeming qualities).  Cooklin just has to give a glance to let us know that she has no interest in history and even though we don't hear her or Klieg state exactly what they are up to, we already know they are up to no good.  Still, when she meets her grisly end, one still feels a slight bit of sadness that she has to be killed off so hideously.

Pastell also makes Klieg very grand in his ambitions, and while there is the danger of being over-the-top (and I'd say that perhaps he was), Pastell is quite great when he sees to his horror that he cannot control the Cyber-Controller and the defrosted Cybermen.  Shaps' Viner is almost comic in how nervous he is, and Roubicek's Captain is his opposite as the confident and bossy leader.

I digres to say that given the wide number of accents (I heard British, vaguely Continental, and even American), The Tomb of the Cybermen does a good thing in making this expedition appear to be a truly international affair.

Curiously, something that has not been remarked on is that in The Tomb of the Cybermen, the Cybermen are the precursors to the Borg from Star Trek.  In 1967 the Cyber-Controller tells the expedition that "To struggle is futile", long before the Borg Queen tells the Enterprise or the Federation that "Resistance is Futile".   Similarly, the Cybermen's main goal right from their debut in The Tenth Planet is to make the humans exactly like them, to transform them into Cybermen.  One could say that the Cybermen have a plan to "assimilate" all life forms, in particular humans, into Cybermen form.  In future Cybermen stories (in particular the NuWho two-part Rise of the Cybermen) this idea is expanded on.

I cannot say whether the Cybermen were thought of or even known when we first meet the Borg, but it does appear that the former has similar ambitions to the latter...and a good thirty-plus years before.

Troughton and Hines continue to make a great double act, bringing a zesty humor to their roles.  Whether it is the irritation the Doctor and Jamie express when they discover they are inadvertently holding hands (something which was not scripted) or in how Jamie dismisses the Doctor's bad pun of how the Cybermen had a "complete metal breakdown", their interplay shows that both the actors and the characters had a great deal of trust in and with each other.  Jamie McCrimmon also puts to rest the idea that the Doctor's best Companions are always female.

The Doctor's newest Companion does well in her debut.  Watling's Victoria is still trying to find her way among the double act of The Doctor & Jamie, and her hesitancy at first gives way to a solid determination to not run from danger (most of the time).

The Tomb of the Cybermen does have some flaws.  The big one technically is in Episode Three when Toberman is lifted by the Cyber-Controller.  The harness holding Stewart up is so obvious that it does become distracting and takes you slightly out of the story.  I wonder if it was a good idea to leave this in when some simple work with today's digitizing could have removed it.

Another flaw is with the Cybermats: these rat-like things that can scurry around when and where the large Cybermen cannot..  I cannot shake the idea that they were created as a potential for a toy line, and they are more cute than menacing.  I figure there have to be people who love the Cybermats, but just like I didn't think much of them in Closing Time, I didn't think much of them in The Tomb of the Cybermen.

Finally, Tomb cannot escape the casual sexism of the times.  No matter how often Kaftan and Victoria ask, all the men (especially the Doctor) insist that they are to remain behind.  One simply cannot imagine NuWho Companions from Rose to Martha to Donna to Amy or even that slut River Song obeying the men's wish to "keep out of danger".  Times have changed, and for the better, but watching The Tomb of the Cybermen with 21st Century/NuWho eyes, this thing of keeping the girls out of it does date the story.

On the whole however, The Tomb of the Cybermen is a fast-paced thrilling story with great performances that tell a great story.  It is the first masterpiece of the Second Doctor's era, and it is so good to have it still with us, thanks to that outpost Hong Kong.

Sadly, the next few stories are in tatters thanks to the BBC.  Stories 38-43 (The Abominable Snowmen, The Ice Warriors, The Enemy of the World, The Web of Fear, Fury From the Deep, and The Wheel in Space) are all incomplete, with Fury From the Deep having no complete episodes in existence.  The closest that one can come to filling in the gaps is to animate the missing episodes of The Ice Warriors in order to have the complete story again (an option that is highly possible given the success of The Invasion which was likewise restored via animation).  Within the missing stories are the farewell appearance of Victoria and the debut story of Companion Zoe Heriot.  It isn't until we get a new Companion that we get another complete Second Doctor story in The Dominators, but at least after that we have a solid run of complete Second Doctor stories, with only the restored The Invasion and The Space Pirates having missing episodes.

As always I will still review the surviving episodes and try to get a handle on how good or bad the stories are.


Next Story: The Abominable Snowmen
Posted by Rick at 8:26 PM