Doctor Who Story 044: The Dominators 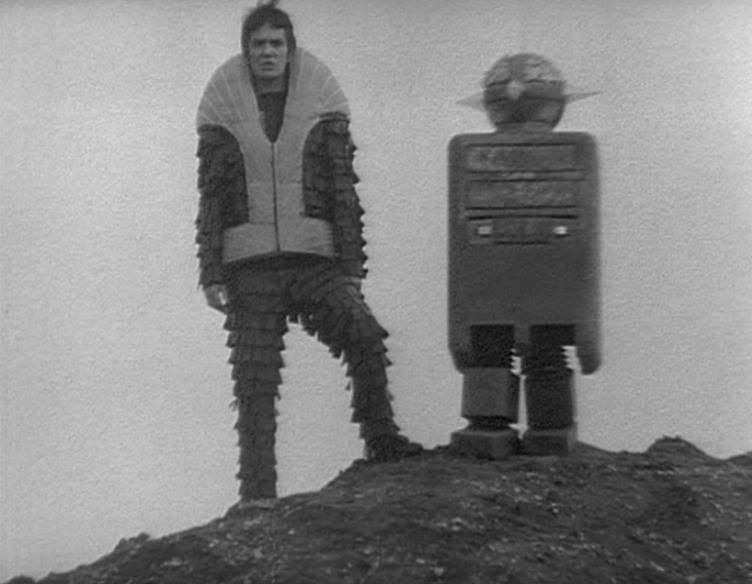 A Bit Quarky For Our Tastes...

One must never, ever, try to write a Doctor Who story with merchandising in mind.  The sad saga of the Cybermen comes to mind.  Now, the Cybermen on their own work quite well, but almost always whenever their 'pets'/marketing prop the Cybermats pop up, in particular in such stories as Revenge of the Cybermen or Closing Time, it looks cheap and idiotic (and in the case of the latter, having the story partially take place in a toy shop makes it all the more obscene).  The Dominators, likewise, faces similar issues.  On greater inspection, The Dominators has some potential good ideas behind it.  If only it weren't for those damn Quarks...

The Doctor (Patrick Troughton) and his Companions Jamie (Frazer Hines) and straight from the previous story The Wheel in Space, Zoe Hariot (Wendy Padbury), arrive on the planet Dulkis.  This world, the Doctor insists, will make for a nice holiday.  It's a peaceful planet where war has been outlawed and all their weapons are in a museum on an island.  The island they've landed on was the location of a nuclear test, and students are taken there every year as a warning against the evils of war.

Of course, this being Doctor Who (pre-River Song) Dulkis obviously is not a the planet the Doctor cracks it up to be.  There is a great mystery involving the island: as the site of the nuclear test it should be highly radioactive, but when the TARDIS crew, the annual scientific Dulcian crew and renegade Dulcians arrive, they are astounded to find there is none.  What could be the cause of radioactivity suddenly disappearing?

The answer is pretty obvious: they are the titled Dominators, Conquerors of Ten Galaxies, who now have their eyes set on Dulkis, or rather, this island.  The radioactivity and thin crust of the island is perfect for their nefarious scheme.  First, we've got to get through a great deal of plot exposition.

First, we learn that the Dulcians are now complete pacifists and would not take arms or fight under any circumstances.  Second, they have great pride in their lack of curiosity.  Only the Director's son Cully (Arthur Cox) shows any curiosity or imagination.  In fact, it was his scheme to ferry people for secret expeditions to the island that brought about the discovery of the Dominators and their robots, the Quarks.  Third, being pacifists the Dulcian leadership simply does not know how to handle the growing crisis (which they've spent at least three out of the five episodes refusing to even consider possible because they haven't seen the Dominators or Quarks).  Fourth, we know that the Dominators are the ones taking the radioactivity as part of a refueling to help their fleet conquer yet another galaxy.

While they think of using the Dulcians as slave labor, they find that they are remarkably passive and weak, so they decide to destroy their world.  With Jamie and Cully leading attacks on the Quarks, the Doctor finds a way to neutralize them and save Dulkis.  Unfortunately, his method involves creating volcanic eruptions, and the TARDIS and its crew are right down the lava's route...

As I stated, The Dominators has some good ideas kicking around it, primarily the conflict that should occur when a pacifist society comes upon an aggressive force.  In Episode Three the Director of Emergencies, Tensa (Brian Cant) makes a good point: there are three choices the Dulcians can take.  THey can fight, they can submit, or they can flee.  IF this concept had been explored, The Dominators might have been saved.

The story by Mervyn Haisman and Henry Lincoln (under the pseudonym of Norman Ashby) could have been taken in the direction of what happens in and to a society that is so passive that it no longer can fight; the pseudonym was adopted after script editor Derrick Sherwin and producer Peter Bryant made one too many changes to The Dominators for Haisman and Lincoln's liking.  We can't judge how good or bad their original concept for The Dominators was.  We can only judge what we have, and as such we have some really bad results of too many people interfering.

However, this idea of the pacifists taking a stand is something we've seen before.  Curiously, this was explored in of all places Skaro, the world of the Daleks.  Like the Dulcians, the Thals were a remarkably peaceful people, but in The Daleks, at least by the end they actually found that their pacifism was in itself the main weapon against them and that they had to fight if they wished to survive.  The Dulcians, on the other hand, were so pathetic both in their response to the crisis and in their inability to think of a way out that one almost thinks the Dominators would be doing them a favor.  The Dulcians in short don't seem to mind that they are either the Dominators' prisoners or slaves.  They really don't have any real reactions to it.

It might be because they have learned to accept facts as the truth (the Dominators are taking over, it's a fact, it must be the truth) but since they have no imagination about the worlds outside their own or for their own survival one wonders why anyone (audience included) should care that they have been overtaken?

As a side note, while the Dulcians were being used to move rocks around, I kept wondering why they didn't simply chuck those rocks at the inept Quarks and run away?  It's not like the Quarks were in any position to run after them, and those rocks could have simply knocked them out.  Silly Dulcians...

Conversely, the Dominators themselves (of which we see only two) act as if they managed to conquer ten galaxies merely by stomping about and boring their subjects into submission.  Navigator Rago (Ronald Allen) and Probationer Toba (Kenneth Ives) spend all five episodes fighting with each other (Toba always destroying things, Rago telling him he's stupid for doing such things and going on about the importance of drilling) that one wonders exactly why the Dominators would send these two morons to lead the conquest of Dulkis.

Going on this topic, one wonders just how stupid the Dominators are.  Apparently, their intense study of the planet only focused on that one island on Dulkis.  Apparently, they were unaware that there was a whole other part full of people that were so docile they were useless as slaves.  One would have thought it might have been a good idea to conquer the capital and, once whatever opposition was suppressed, move on to take the radioactivity.  That, however, was not the Dominator way.  The Dominator way was to basically ignore the fact that beyond the island was an entire civilization that might, in theory, cause them problems.

These Dominators really are incredibly stupid.

Not as stupid as the Quarks.  If the Dulcians are the pale versions of the Thals, the Quarks are the low-rent version of the Daleks.   Everything about them is stupid: their voices (supplied by Sheila Grant) make them curiously both sometimes unintelligible and sound like someone is forcing a little girl to speak into a voice modulator.  Their method of recharging is apparently is to give themselves hugs.  Whenever their arms go out to destroy something, you think how odd that one arm is higher than the other.  You also wonder how they manage to keep their balance.

You can't make a menace out of something cuddly, and the Quarks are if nothing else almost cute.  The fact that The Dominators tries so hard to make them dangerous makes them even more endearing.  Thoroughly useless and stupid as monsters, but endearing nonetheless.

The Dominators is almost doomed from the beginning because Episode One gives so much exposionary dialogue delivered in an unrealistic manner that one never focuses on the story it's trying to tell.  Instead, we're crammed with so much backstory by the characters telling each other things they should already know (but which is being told for our benefit) that it all rings false.  After that, one is waiting to see which of the three groups (the Dominators, the Dulcians, or the Quarks) will be the most inept. 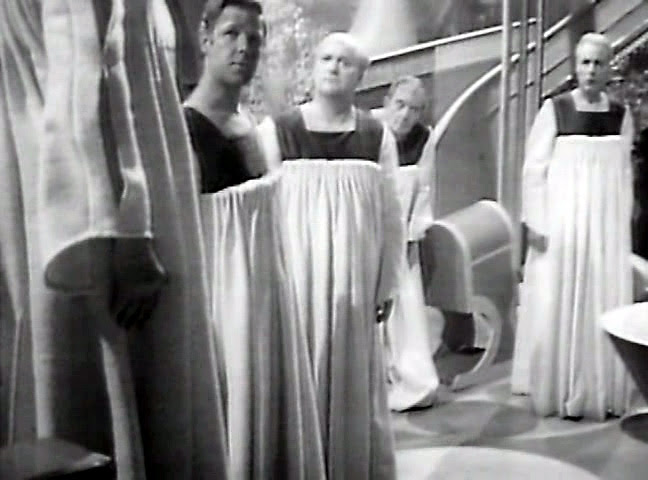 If all that weren't enough to doom The Dominators, Martin Baugh's costumes brought the whole project down into being a sheer disaster.  The costumes for the Dulcians looked like something Benny Hill would have rejected as too silly.  Especially awful was Cully's outfit, which looked like a little girl's poor attempt at taking her mother's curtains and making a dress out of it.  Poor Cully was running around in a curtain, trying to defeat these cuddly creatures.

As if to show the Dominators themselves to be the mirror opposites of the Dulcians, they stomp about with these ENORMOUS shoulder pads that would have made Joan Crawford jealous, and these trousers that seemed to be made out of paper-mache.  The whole thing was embarrassing and only leads to unintentional laughter.

Are the Dulcians distant relations to the Time Lords?  Both are suppose to be great brains, and both have two hearts.  Is it mere coincidence that both civilizations eventually became atrophied?   This is something that might be explored in fan-fiction, but it is a curious thing, no?

Morris Barry did one of the worst directing jobs on Doctor Who, with the Dominators being one-note and the Dulcians likewise showing no evolution or interest.  Everyone looked like they were bored with The Dominators, not believing a moment of it.

The Dominators have villains that weren't interesting, monsters that were more laughable than menacing,  beings who proved hopelessly inept at any action pro or con, and at five episodes it was about two too long.  The original idea was to make this another six episode story, but fortunately there was a snap decision to cut it down by one.  Even with the oddly-numbered amount of episodes The Dominators is too long and if not one of the worst Second Doctor stories, perhaps one of the worst Doctor Who stories, period.

In short, the only thing The Dominators will ever dominate is the Worst-Of Doctor Who Lists.

Next Story: The Mind Robber
Posted by Rick at 2:44 AM