Which Witch Is Who? 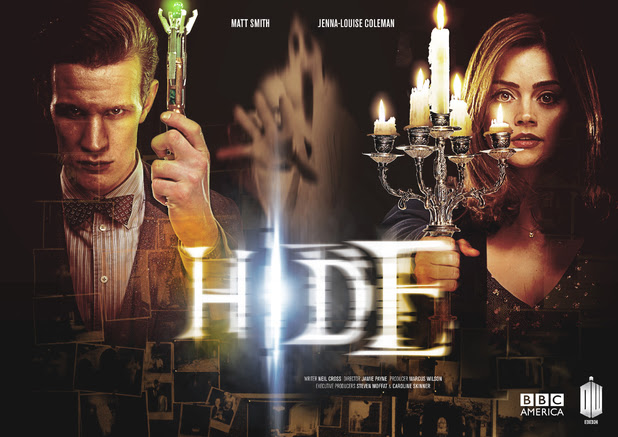 Originally titled The Hider in the House, the Doctor Who story Hide now shares with Rose the distinction of having the shortest title in the franchise's history at a mere four letters long (42 is technically speaking a shorter title, but it consists of numbers).  What was billed as a ghost story really is a mishmash of genres where screenwriter Neil Cross (in his second Who story after the disappointing Rings of Akhaten) appears to have run out of ideas about halfway through, then decided to give it a new setting, and then kept throwing things at the screen to stretch it out.  In a strange turn of events, Hide is different from other Series/Season Seven Doctor Who stories: rather than the story being too short for its running time, Hide is simply too LONG for its running time.  It also has a few plot points that don't make sense when given enough thought, but it is strong on atmosphere (sometimes ridiculously so, but there it is).

Professor Alec Palmer (Dougray Scott) and psychic Emma Grayling (Jessica Rayne) are investigating (or ghost hunting, whichever you prefer) the Witch of the Well, a legendary ghost at Caliburn House in 1974.  Into their investigation pops in The Doctor (Matt Smith) and his Companion, Clara (Jenna-Louise Coleman).  The Doctor, convincing Palmer that he too is with the Ministry, plops himself down to be part of the investigation. This strange figure haunting the place has been been in the area for thousands of years, yet in all the photos she has the same position.  Something spooky is afoot.

There are also things going on within the hunters.  Emma carries a torch for Palmer (which is obvious), but Palmer is reluctant to pick up the sparks.  He feels guilt about his secret work during the War, which he keeps hidden.  The Doctor gently encourages Palmer to reach out to Emma, but unbeknown to him, Emma warns Clara to not trust the Doctor.  "There's a sliver of ice in his heart," she tells Clara.

Not that the TARDIS cares, given how it and Clara just can't seem to get along.  The Doctor quickly sees that the Witch of the Well is really Hila Tukorian (Kemi-Bo Jenkins), a space explorer (something about being a pioneer in time travel...I forget), trapped in a pocket universe which Caliburn House is a gateway to.  The Doctor learns all this while travelling through time on the TARDIS, taking snapshots of the same location, which disheartens Clara, who now sees that to the Doctor, all his Companions are ghosts, disappearing without so much as a how'do.

In any case, the Doctor manages to rescue Hila by travelling through the gateway with Emma's psychic powers enhanced by crystals from Metallis III (last mentioned in the Third Doctor story Planet of the Spiders), but while Hila escapes, the Doctor is trapped.  Clara demands Emma use her powers to rescue the Doctor, but Emma is too exhausted physically and emotionally to do so.  However, there is the TARDIS.  Despite the danger the TARDIS faces in entering the pocket universe and its dislike for Clara Oswald, it goes, and with Emma's psychic powers, brings them back.

Finally, we learn that Hila is Emma's descendant...hers and Palmer's.  We also learn the real reason the Doctor came to Caliburn House: not for the Witch of the Well, but to consult Emma about Clara.  The psychic tells him she's just a girl, nothing more or less.  The Doctor also realizes that the strange figure within the pocket universe was really just searching for its mate (The Monster Demands A Mate!), which is trapped in Caliburn House.  Another sweep by the TARDIS to collect the other monster for a little love fest... 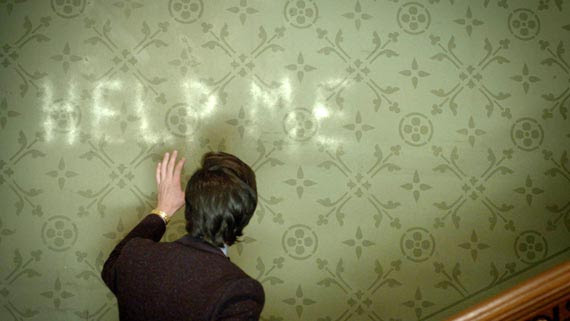 In terms of plot so much of Hide either doesn't make sense or is never explained.  Exactly HOW does the Doctor know so much about Professor Palmer's past?  If Hila has been trapped inside that 'pocket universe' for a few seconds or minutes in her time but thousands of years to us, when does she stop to write "Help Me" on the walls of Caliburn House?  As the Doctor travels through time to collect pictures to figure out how long the Witch of the Well has been there, how did he come to the conclusion that she was this space traveler none of us had ever heard of?  If the TARDIS would be trapped within the pocket universe if it landed there, was it cheating by having it merely fly-in...twice?  Given the TARDIS is harboring a dislike for Clara (for reasons to be revealed later), did the TARDIS basically fly itself since Clara would not have had time to master its controls? Why would the Doctor turn to a psychic (even if she was an empathic one) to solve the mystery of Clara Oswald?  Couldn't he just call Miss Cleo?

One thing that I didn't care in Hide is that we're constantly told about Palmer's past (again, exactly how the Doctor knows all this information we're never told or at least I don't remember being told), but it proves irrelevant to the story overall save for his reluctance to romance Emma.  Palmer is suppose to be a 'haunted' man (pun perhaps intended) but it isn't a major part of the story.

To its credit, Hide gives us all those traditional 'haunted house' motifs (the thunder and lightning outside this massive home) only to pull them away for a quasi-parallel universe.  In those moments when we're given the atmospheric elements of a horror story Hide really gets them all right.  We have the thunder and lighting, the flickering lights, the eerie stillness, even the 'you get the feeling you're being watched' line (which might have come from a Bugs Bunny cartoon). I don't even begrudge them the twist to give the 'ghost' a more scientific explanation (or at least an explanation not grounded in the supernatural).  However, just like Cold War was highly reminiscent of the film Alien, Hide was highly reminiscent of the film Poltergeist.  You have the 'ghost' who is on the other side of bright light, a female trapped on the other side, a rescue to get her which means going into the light, a psychic who is vital to bringing the female to the living side.

I'm surprised the Doctor didn't say, "This house is clean."

Speaking of, when I saw the Doctor running away from the 'ghost' at the top of the stairs, I was waiting for him to say, "I ain't 'fraid of no ghost," sense he and Clara are in her words, "ghostbusters".  Smith is just a dimwit as the Doctor, and I should just resign myself to his interpretation of the character.  Coleman had a good scene when she finds that Companions come and go for the Doctor, so that's another plus.


Hide does have some good things in it. Scott and Raine work well together as the thwarted lovers, doing so much with so little.  Sadly, Jenkins is nothing more than a plot device: once she's rescued she is basically irrelevant, especially since we were given this faux-happy ending of 'having the monster lovers reunite'.  Again, the touches of what is a traditional horror story are there, and it's those little nods to Gothic horror that push Hide a little higher in terms of score.

On the whole, Hide for me seemed like it was throwing a lot without having much to back it up.  Once we got the pocket universe story all the 'horror' elements to what looked like a nice homage to spooky tales of things that go bump in the night shifted and we get a cross between Poltergeist and a rom-com.  I didn't hate Hide, but I didn't love it either.

Next Story: Journey to the Centre of the TARDIS