What A Difference A Fanbase Makes 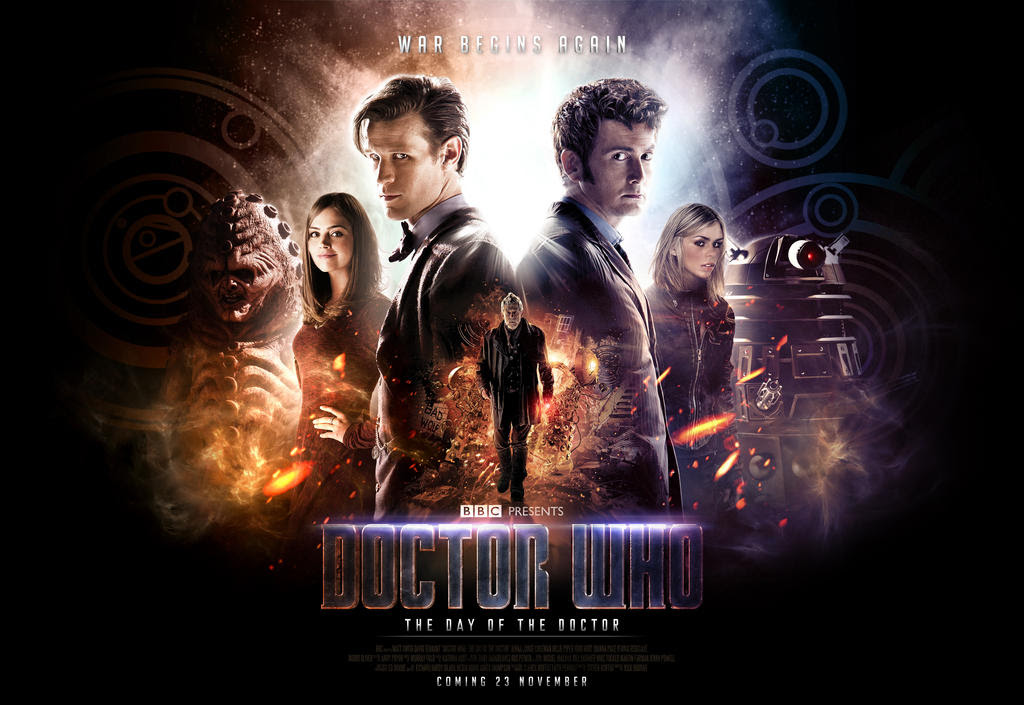 THE DAY OF THE DOCTOR:
FIRST IMPRESSIONS

This is the first part of a trilogy.  This first essay will be detailing my views on the fans who attended The Day of The Doctor theatrical screening.  The second will be the actual review of the 50th Anniversary Special.  The third...well, Spoilers.

I had intended to watch The Day of The Doctor at home where I had recorded it on the DVR.  However, I was invited to go see the rebroadcast, for free, by one Bryan Majewski, and I decided I might as well go.  I met a few of his friends, all who were NuWhovians (fans of the 2005 revived series who had little to no knowledge of what came B.R.: Before Rose).  For them and many participating in the event, dressed as the Tenth and Eleventh Doctor (particularly with their fezzes, red bow ties, and sonic screwdrivers), they were highly excited to participate in this special occasion, but they are synonymous with something I simply don't understand.

How can people celebrate the Fiftieth Anniversary of something of which the first Forty-Two years are either unknown or unimportant to them?

For all the enthusiasm many NuWhovians had at The Day of The Doctor screening, there is something almost dismissive of what came between An Unearthly Child and Survival or Doctor Who: The Movie...unless it, like Eight Doctor Paul McGann's 'regeneration' in the webisode (and I would argue, non-Canonical) The Night of The Doctor, is actually related to NuWho.

﻿
As far as many NuWhovians are concerned, almost everything from 1963 to 1989 is something 'out there', something that exists but that little to no relevance to what they enjoy now.   Susan Foreman, Romana, Jamie McCrimmon, Omega, The Rani, The Black Guardian...these iconic Doctor Who characters and the stories they were in are unknown to those who insist they are Who fans.  That is already bad enough, but to add insult to injury, all those characters and stories have no impact on how the see the show they love (which given their importance is almost insulting to the history they insist they are celebrating).

Before The Day of The Doctor began, I amused myself by going up to random fans and ask them what I consider to be basic Doctor Who trivia.  I selected people who were at least teens to early twenties, so I left out a cute little boy in a fez and bow tie.  I couldn't find it in my heart to pick on someone who probably had grown up exclusively on NuWho.

Before going into the theater, I just shouted to a guy in a tweed jacket, bow tie and fez, "Third Doctor?"  He didn't know.  I then shouted, "What the name of the Doctor's granddaughter?"

Inside the theater, I went up to a couple: a girl in same outfit and her large male companion.  I asked them what other Time Lord had been a Companion.  She didn't know (I think she couldn't conceive of a Time Lord Companion), but to his credit he answered correctly: Romana.  He informed his friend she was with the Fourth Doctor for a while.

Having some confidence that perhaps my theory was wrong, I then asked for them to give me the Brigadier's full name.  She looked more confused, but he answered "Lethbridge Stewart".  I smiled and said, "Full Name", to which he answered hesitantly, "Lethbridge REGINALD Stewart?".


Next group, some old and new questions.  The name of The Doctor's granddaughter?  "We know, we know..." but they didn't.  "A Time Lord that was a Companion?"  An answer came quickly, "River Song", though the group began debating whether she was a Time Lord or merely "a Child of The TARDIS" (is it any wonder I always say River Song was 'conceived by the Power of the Holy TARDIS').  "Name The Doctor's first American Companion."  Puzzled looks.

Finally, the Three Quotes.  In their defense they got all three right, but the ONLY reason they got them right was because they had heard the quote in The Day of The Doctor.  If they hadn't heard it, it is highly doubtful they would have known it or attributed it to the right person.


My point in all this is not to bash NuWhovians.  They are perfectly free to enjoy anything they wish.  I also am not so demanding that I would ask the metaphorical version of 'how many Time Lords can dance on the head of a pin?'  There are things that I don't know or remember about Classic Doctor Who.  I'm not going to ask esoteric questions delving into the minutiae of Who lore.  Even Classic Who fans may not know when the Sea Devil and Silurians joined forces or all the actors who played The Master or how often the Autons battled the Doctor.

What I DO ask constantly is how is it possible that people could celebrate something without knowing little to anything of what came before.  It is like celebrating Independence Day without knowing ANYTHING about the Second Continental Congress: who were the signers, what the Declaration says, why they did what they did.   There is this great ignorance on the part of many NuWhovians who don't know or worse, don't care about what came before Russell T Davies came to the scene.  It is important to know what came before, otherwise things as continuity fall part apart.

For Heaven's sake, we have the Brigadier's daughter Kate Stewart (Jemma Redgrave) as a character, taking her father's place in UNIT.  Here you have a character that harkens back to the Classic series but you have "fans" who not only cannot connect Kate Stewart with a true Doctor Who icon, but who for all the proclamations of Who fandom, can't answer a simple question like the Brigadier's full name.


For me, it is the same as saying you are a fan of Star Trek, but think that Zachary Quinto originated the role of Mr. Spock.  This may be why Classic Star Trek fans voted Star Trek Into Darkness the worst Star Trek films, not because it was badly made (it wasn't) but instead because it took one of the iconic Star Trek characters and plots and attempted to pass it off as 'original'.  The presentation of "John Harrison" was basically a slap at those who grew up watching either the Original Series or the Star Trek films.  Those who know nothing or little of the Original Series or the films may be impressed with Into Darkness, but those who know the history, especially the hard-core Trekkers, were infuriated.

Similarly, Classic Doctor Who fans cannot do anything but watch in horror as NuWho fans, filled with fezzes and sonic screwdrivers, overwhelm the fan base.  The stories Classic Who fans grew to love (The Aztecs, The Tomb of the Cybermen, Genesis of the Daleks, The Curse of Fenric) along with continuity from the Classic Series, is being obliterated in the rush to become more and more popular (and more and more convoluted).  In one plot point of The Day of The Doctor (the actual number of regenerations) we have the great issue of trashing continuity established in The Trial of A Time Lord season with the character of The Valeyard (whom I figure NuWhovians have never heard of).  This is a source of debate, but that is for another time.


Something established as Canon in 1986 has apparently been forgotten or simply trashed by one episode in 2013.  The Day of The Doctor renders long-established continuity irrelevant, or worse, runs the risk of not making any sense within NuWho itself, let alone the fifty year series as a whole.  Again and again for a series that for twenty-six years kept pretty solid continuity, the revived series not only muddles its own continuity but goes after long-established Who continuity to have some 'shocking twist' that is later forgotten or ignored (mostly because as I was told by one of Bryan's friends, "It's NOT suppose to make sense.  It's British!").

The NuWho fans, with their willful ignorance of what came before Eccleston came along, are more than ready and willing to NOT question whether the series as a whole makes sense.  Things that occurred immediately before The Day of The Doctor aren't remembered or thought through.  Simple information (past Companions, enemies, or established Canon in previous stories) is an irrelevant mystery to NuWhovians.  Those who say are Doctor Who fans must eventually make a decision: are they fans of NuWho, of only those stories that started with Rose, or are they fans of ALL Doctor Who, starting from An Unearthly Child to The Day of The Doctor.  If they are fans of NuWho only, then they cannot in sincerity celebrate a Fiftieth Anniversary.  They may celebrate the Eight Anniversary, but not the Fiftieth.

If they are fans of ALL Doctor Who, from William Hartnell to Matt Smith, then they have to learn more about the show's past and be willing to question when an event from a story in 2013 conflicts or contradicts in a major way with a story in 1983.

﻿
Answers to Basic Doctor Who Trivia:

Perhaps Chris Hardwicke can answer all those questions easily, but his unquestioning promotion of NuWho and unwillingness to promote Classic Who or call out issues with NuWho makes him a dubious Ambassador to the Non-Whovian world.