You've Got To Change Your Evil Mind. Doctor Who Story 056: The Mind of Evil

The tricks of the mind are nothing new to The Doctor.  In The Mind Robber the whole story was built around how one being, The Master of Fiction, manipulated the space travelers to build up his universe.  In The Mind of Evil, we see another Master attempting world conquest by appealing to humanity's desire to 'improve' the mind.  The Mind of Evil does a wonderful job of integrating the Master into the story to where we believe it is possible to have him behind the machinations and not just a convenient villain to use, and while I quibble at a few aspects on the whole I was surprisingly pleased how well The Mind of Evil worked both visually and storywise.

The Doctor (Jon Pertwee) and his Companion Jo Grant (Katy Manning) go to Strangmoor Prison to see the Keller Process.  Through a machine, criminals can have all their negative impulses removed, making them docile but functional members of society.  Barnham (Neil McCarthy) is the latest criminal to undergo the Keller Process.  This time, some things remain the same: the prisoners are in an uproar whenever the Keller Machine is used.  Some things, however, are different: under the eye of Professor Kettering (Simon Lack) the Keller Process creates a particularly painful reaction to Barnham.  The Doctor is fiercely opposed to the Process and insists the machine be destroyed.  Needless to say, he is ignored, even after two people end up dead near the machine, including Kettering, who died by drowning in a dry room.

In a seemingly unrelated story, UNIT Brigadier Lethbridge-Stewart (Nicholas Courtney) has his hands full with a World Peace Conference.  The Chinese delegate's security detail, headed by Captain Chin Lee (Pik-Sem Lim) comes to the Brigadier with various complaints.  The Chinese delegate's room has been robbed, despite round-the-clock surveillance from UNIT.  However, she herself has stolen the papers, under some form of mind control.  The Chinese delegate now turns up dead, and despite his objections the Doctor is forced back to UNIT HQ by Captain Yates (Richard Franklin), with Jo staying behind.  The Doctor puts things together when he learns that a Chinese girl (Captain Lee) is missing, because a 'Chinese girl' had assisted the mysterious Professor Keller in installing the machine. 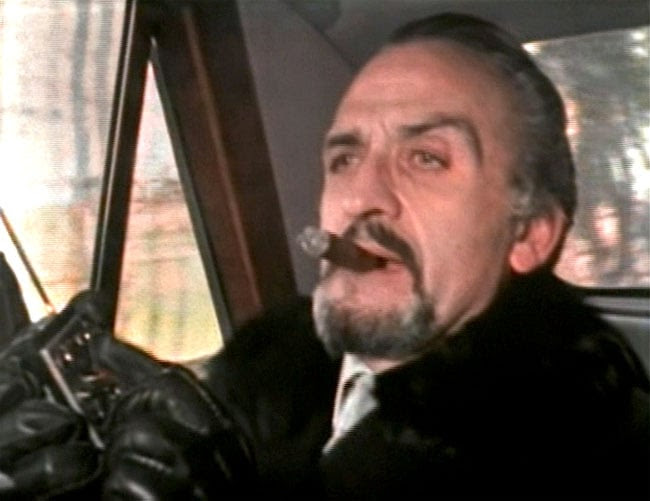 Professor Keller unmasks himself (literally).  It is The Master (Roger Delgado), plotting a wild scheme for world domination.  UNIT has been placed in charge of destroying The Thunderbolt, a missile so dangerous it has been universally banned and will be destroyed.  He will take it and use it for blackmail, and failing that, launch it at the Peace Conference and start a world war.  The Master takes advantage of a situation at Strangmoor: a riot where the next person up for the Keller Process, Mailer (William Marlowe) attempts an escape but only manages to take over the prison, taking Jo as a hostage.

The Master offers Mailer a chance to escape with a fortune if he helps him use the prisoners as a private army to seize the Thunderbolt and use it against his enemies, especially the Doctor.  The prison changes hands repeatedly: Jo manages to start a counter-revolution and the guards briefly retake Strangmoor until the Master leads the counter-counter-revolution.  The Doctor is now forced to help the Master, especially since the Keller Machine (which contains a parasite that uses a person's greatest fear to kill them) is growing out of control.  It soon takes a life of its own, moving at will and apparently killing at will too.

The Brigadier learns the Thunderbolt has been taken and mistakenly believes the Master took it to Strangmoor.  Leading a daring raid, he retakes the prison (saving the Doctor and Jo in the process) but discovers through Captain Yates, who was taken prisoner, that it is being stored in a warehouse not far.  The Doctor makes a bargain with the Master: the missile in exchange for the dematerialization unit he took from the Master's TARDIS in their last encounter.  The Master agrees.  Barnham is brought along with the machine because he no longer has evil impulses and thus the machine has no power over him.  However, in the chaos of the confrontation between the Master and the Doctor the machine, the Thunderbolt, and Barnham are all destroyed.

Worse still, the Master has managed to recover his dematerializing unit, while the Doctor is still stuck on Earth in his forced exile on orders of the Time Lords. 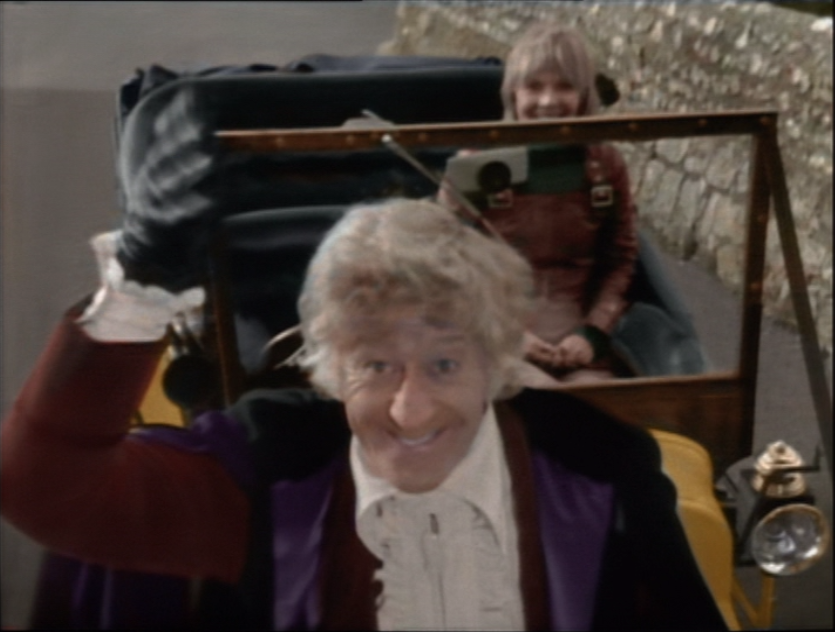 The Mind of Evil is a rarity in that it is one of a handful of non-Dalek stories where at six episodes, it does not feel stretched out.  In fact, every ending works, leading to a more and more exciting conclusion.  Even the fact that we had few settings (Strangmoor dominated the story) and that the Peace Conference was basically forgotten by Episode Three does not hamper The Mind of Evil one bit.

Screenwriter Doug Houghton had some brilliant ideas within the story.  Chief among them was to keep the Doctor, the Master, and Jo basically separated for almost half of the story.  It allows for the Doctor to solve this mystery of who is behind the Keller Process and the attacks at the delegates, for the Master's scheme to be exposed, and for Jo to take a more proactive stance.

Certainly Katy Manning is in top for in The Mind of Evil.  She is not the sweet-but-dim Companion she was in danger of becoming.  Instead, she comes across as a kind person (she is hit especially hard by Barnham's death) but we also see that she is unafraid.  Without the Doctor to help her in any way, she uses her wits and inner strength to literally kick-start the short-lived retaking of Strangmoor from Mailer and his lot.  What we see in Jo Grant is a girl who is strong, brave, and endearing.

It is also a great showcase for Courtney, who is allowed a bit of humor when in Episode Five he goes for a Cockney accent when masquerading as a lorry driver.  Courtney and Pertwee work so well together, allowing for great humor to lighten up a series of killings.  When the Doctor is taken to see the Chinese delegate, someone mentions the delegate speaks a specific Chinese language.  Referring to the ethnic group, the Doctor says, "So he's Hokkien," the Doctor states.  "No, he's Chinese," the Brigadier replies.  As usual, the Brigadier missed the point of the Doctor's comment, making him both a bit thickheaded but endearing.

Courtney and Pertwee show how great a duo they make when in a tense opening to Episode Six, we find it is the Brigadier who saves the Doctor from Mailer's gun.  "Thank you very much, Brigadier," the Doctor says, then adds snappishly, "but do you think for once you can come BEFORE the nick of time?"  The unflappable Brigadier merely looks on and says, "Good to see you again, Doctor."  Here we see how strong and deep their relationship is.

As for the Doctor and the Master, we get a master class in performing.  Pertwee gives the Doctor a full range of emotions: he is light when arriving at the prison, serious when he sees what he believes to be wrong, terror when the machine attacks him, respect when speaking to the Chinese, and a whiff of anger when he realizes the Master can get away while he can't.  Delgado makes the Master a calm, cool, elegant figure, a worthy adversary to the Doctor.  However, we are allowed to see under the veneer of suave calm there is a deeply frightened figure.

Nothing captures this more than when we are shown the Master's greatest fear.  Each person who has come under the power of the Keller Machine dies by what they fear the most.  For one, it was rats, and another, water.  The Doctor is almost killed when he relives the horror of an exploding world (flashbacks to Inferno).  As for the Master?  His greatest horror is The Doctor Laughing Triumphantly over him.

Director Timothy Combe has some simply brilliant moments in Mind of Evil.  Granted, the special effects on Classic Doctor Who were never the most avant-garde or lavish, but Combe did wonders with what he had.  The Keller Machine's power of disorientation is done with distorted images and twisted camera work.  There is a beautiful transition from the Doctor to the Master in Episode Four that is astonishing.  Dudley Simpson's score is in turns chilling and exciting.

If there were anything to quibble over it is that yes, some of the special effects are noticeably bad.  The Thunderbolt's appearance is so patently blue/green screen it doesn't even match.  The 'Dragon' that appears in Episode Three is similarly laughable, so much so that its appearance is cut down considerably so as to not draw attention to how fake it is.

I would also argue that the whole 'parasite inside the machine' bit never worked for me.  It didn't go anywhere and I would have preferred that the Keller Machine just be the Master's own creation that spun wildly out of his control.

Finally, it should be mentioned that the restoration work on The Mind of Evil is simply brilliant.  The Mind of Evil was virtually lost, and while filmed in color only black-and-white copies existed.  However, the colorization process was worth the wait and release delay, as I was completely unaware that it was not the original print I was watching, but instead a painstaking restoration.  The story simply never looked better.

Minus a few hiccups The Mind of Evil gives one a worthy villain, an exciting series of episodes, and some fine bits of acting and action.  Combining this with great music and camera work we find that in the final analysis, this is indeed a beautiful Mind.

Next Story: The Claws of Axos