The Axos of Evil. Doctor Who Story 056: The Claws of Axos 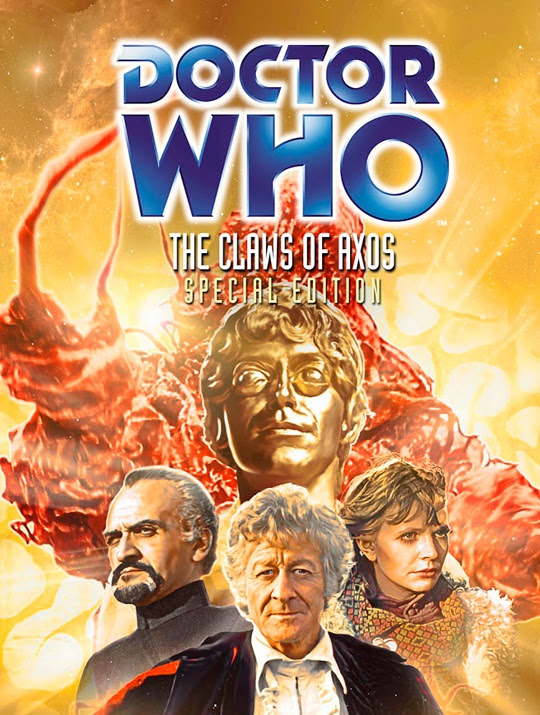 Before Greeks bearing gifts is the old saying.  What then when it is aliens who come and present offerings? The Claws of Axos does away with the ugly alien (mostly) by presenting a group of beautiful golden beings.  It doesn't do away with The Master, but at least here, despite having escaped The Doctor and UNIT's clutches, his presence does at least have a note of logic to it (which sadly would not always be the case in future Master stories).

A strange vessel is headed to Earth.  The Doctor (Jon Pertwee) has to convince Minister Chinn (Peter Bathurst) that it might not be hostile, the idea of firing first and asking questions later so angering him.  The Brigadier (Nicholas Courtney) is caught in between: fearing that the ship is hostile but knowing the Doctor's got a pretty good track record on these sort of things.  The ship proves its worth when rockets Chinn orders fired fail, putting the Earth in danger.

The ship lands near a power plant, and while the landing and 'crew' don't appear to pose any real threat, a hobo that had been taken into the ship prior to UNIT and Chinn's arrival might disprove that idea.  Inside, however, we get strange goings-on: the American UNIT delegate Filer (Paul Grist), who has a mutual affection for the Doctor's Companion Jo Grant (Katy Manning), goes into the ship but is spared, being examined to have high intelligence that could serve useful.  When UNIT, the Doctor, and Chinn go in, the ship finds that the Doctor is alien too.

We also get another surprise.  Being held aboard the ship is none other than The Master (Roger Delgado).  This, however, is not know at the onset.

The Axons offer UNIT a gift in exchange for taking some of Earth's energy supply to fly off: Axonite, a 'thinking molecule' that can reproduce anything.  It could end world hunger by increasing the size of animals among other things.  Chinn, always seeking a UK advantage, wants exclusive rights but the Axons want it spread worldwide.  The Doctor, however, is not convinced that this is all purely benevolent. 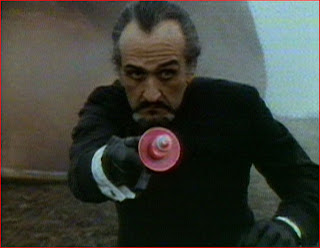 His theories and suspicions are proven correct.  While the other scientists are thrilled with Axonite, he finds that the ship, the beings within it, and the Axonite itself is all part of one giant entity.  When he tested the Axonite to see if it would do wonders, he accidentally triggered Axos' plan: to spread itself over the whole world and drain the life force of everything (and everyone) on Earth.  For Axos to succeed it needed 72 hours to spread everywhere, but the Doctor's test brought a controlled released over that part of England.

Meanwhile, the Master (who traded his services in exchange for his life), attempts a long game: he will get his revenge on the Doctor while also dump Axos and make his escape in the Doctor's TARDIS (given that Axos is holding his for insurance against such duplicity).  However, the Master is caught trying to use the power plants energy to power the TARDIS (oddly, I think the Doctor was planning this to get out of his forced exile) but he holds one ace up his sleeve: he is the only one who can stop the explosion Axos is going to unleash in the power plant, but it does mean destroying Axos itself, where the Doctor has been taken prisoner.  The Master gives the Brigadier a choice: save the Doctor and Jo or save the world?

The Doctor and Jo do manage to escape, and the Doctor learns that Axos wants to use his knowledge of time travel to now go and devour through space AND time.  It is here that the Doctor appears to join forces with The Master, telling him they could escape Earth together.  The Master helps him make the repairs to the TARDIS, and they materialize inside Axos.  Here, the Doctor tells them he will join both TARDI but instead traps Axos in a time loop.  The Master escapes to his own TARDIS in the chaos, and while the Doctor manages to free himself from the time loop he finds that his escape is short-lived: the Time Lords have programmed the TARDIS to always return to 20th Century Earth to his great frustration.

"It seems I'm some type of galactic yo-yo," the Doctor retorts to a clearly-pleased Jo and Brig.

I can't say that The Claws of Axos is my favorite Third Doctor story so far, but I can say that despite some obvious limitations it is lifted by some of Pertwee's best moments as the Third Doctor.

A big problem was both the sets and the effects.  In regards to the former they made me think of all things, an Ed Wood movie.  When I saw the Doctor struggle against the actual claws of Axos I could only think of poor Bela Lugosi trying so hard (and failing so spectacularly) to convince anyone that the monster in Bride of the Monster was real.  Just as Lugosi clearly was moving the tentacles himself, so anyone caught in 'the claws of Axos' appeared to be operating them (or that there were people flailing their arms to attempt to simulate movement).  Even what was suppose to be offices looked a little fake, and the actual Axos itself, while a good try, looked like a set.

The special effects similarly have not worn well.  The opening shot of the ship sailing towards Earth looks so rubbish and the actual aliens when unmasked looked like spaghetti come to life.  It is clear also when Axonite grows a frog that it is just an image being expanded or shrunk based on the plot's necessity.

However, credit should be given where it's due, and Michael Ferguson's direction did manage to do great things with the story and the budget limitations.  Certain montages are creepy in their psychedelic weirdness, and when the hobo's body melted, what we saw was quite effective overall.  Ferguson also brought great performances out of everyone.

Pertwee's performance in The Claws of Axos is I think the best so far of his tenure.  Pertwee was so convincing in Episodes Three and Four that I was never sure if he was playing a long game himself to deceive the Master and Axos (even if it meant misleading Jo and UNIT) or if he really did want to take advantage of the situation to try and escape his exile.  Pertwee managed to make us believe that he would work with the Master, that he might want to leave UNIT, and that maybe he was doing it all to save Earth. 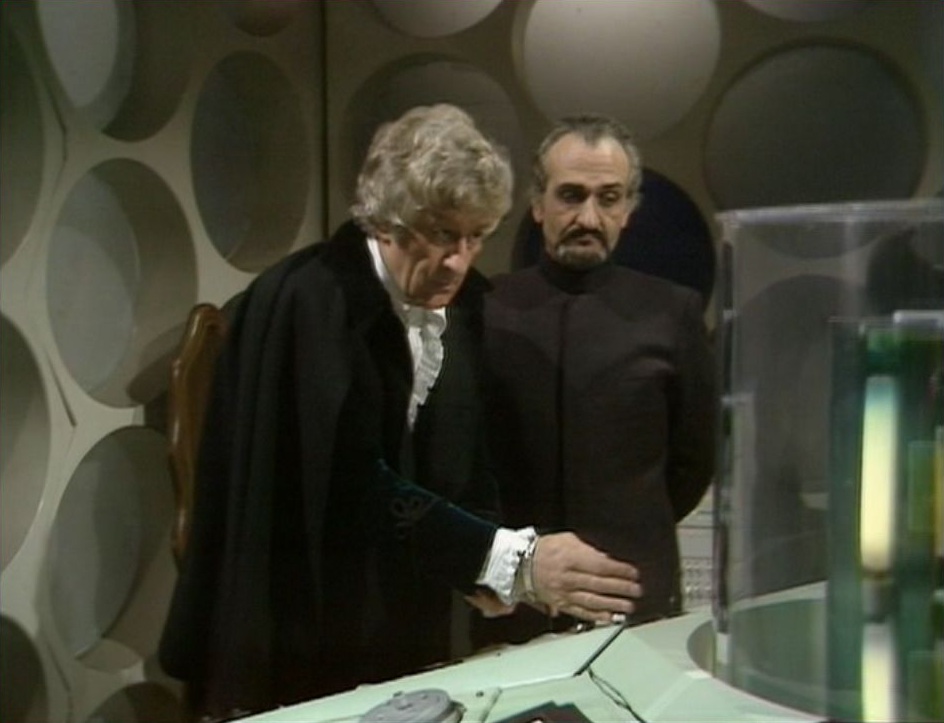 Manning also shows that Jo was fiercely loyal to the Doctor, and while the subplot of Filer and Grant maybe wasn't as explored as it might have been, both Manning and Grist communicated that they were interested in each other.  Comic relief of sorts was provided by Bathurst, who as Chinn (I imagine a pun on his weight and his double chin) clearly made the minister a total idiot.

Here is where Bob Baker and Dave Martin's screenplay allows for great subtle humor to show up.  In Episode Two Chinn communicates with his superior.  "Minister, will you scramble or shall I, sir?" he says.  The voice on the other line says, "Just your report, Chinn.  I'm sure that will be quite garbled enough."  Chinn does not get the meaning behind the message.  As we go through The Claws of Axos, we see he (and government officials in general) are shown as dunderheads.

Delgado is equally brilliant as the Master, that mixture of menace and charm working to full effect.  In some ways, his naivete of joining forces with the Doctor and believing that perhaps they could escape is almost sweet.  However, when he threatened the Brigadier to either save the world or save the Doctor, there is a coldness to him that says it might be logical, but it wouldn't pain him to see his nemesis killed.

We also see Courtney's Brigadier to hold his own, his frustration with bureaucratic blundering clear, and also his hesitancy to allow the Master to try to destroy Axos with the Doctor and Jo within.  The Brigadier genuinely struggles with this, albeit briefly, but for a man who blew up the Silurians without batting an eye this moment is an evolution for him.  He's not the singularly military mind at all, but one who is weighing the costs of his decisions.  I'd say that the Doctor too is taking some notes from the Brig, for he suspects something sinister in something that appears so benign.

The Claws of Axos suffers from some weak-looking sets and effects, but it moves fast and has great performances.  I think that if it had been a six-part story, it would have been disastrous. However, at four it works well, has witty moments, and have a few twists and turns that make it if not as good as it could have been, certainly a story worth clutching.

Next Story: Colony in Space