The Mural Project of The Doctor

Flatline has done better than the previous Doctor Who story, which is an incredible feat given Mummy on the Orient Express (despite the loony title) was already the highlight of a dismal season.  Jamie Mathieson, who wrote both Mummy and Flatline, has apparently been given free rein to create genuine Doctor Who stories pretty much removed from Steven Moffat's fixations and arcs.  There was that, and they were obviously forced to where if they were removed Flatline would have been even better.  Given those limitation, to have TWO great stories from ONE author shows that Doctor Who, when it is good, can really give us a tense, exciting story where even the most bizarre situation can be made plausible.

The Doctor (Peter Capaldi) is planning to take his Companion Clara (Jenna Coleman) back home, but ends up in Bristol.  That, however, isn't the problem.  It's the fact that something is draining the TARDIS' power, which is causing the TARDIS to shrink.  Clara ends up outside the TARDIS while the Doctor is basically trapped inside, unable to leave because while the interior remains the same size, the TARDIS has shrunk to where it fits inside Clara's purse. 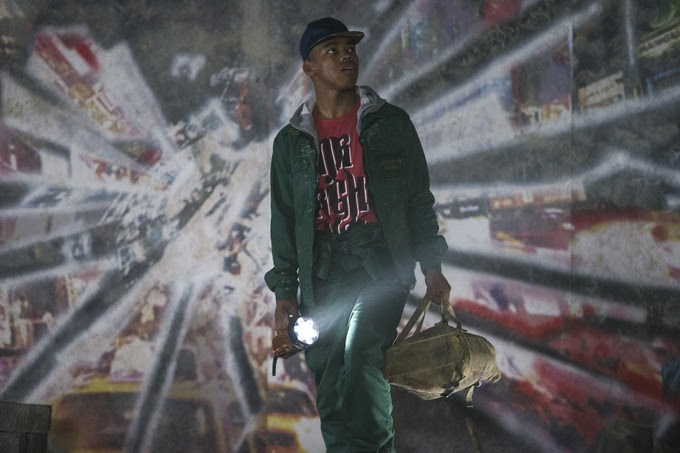 Clara is basically put in the position to be 'the Doctor', and this goes to her head.  She introduces herself as "Doctor Clara" to the crew cleaning up graffiti in the estates (in America, the projects).  Among them is Rigsy (Joivan Wade) serving community service.  He becomes the de facto Companion as they investigate the curious disappearances of people, who are 'memorialized' in a mural in a tunnel.  Curiously, the murals of the missing people are all facing away from the viewer.  Soon the disappearance of Police Constable Forrest (Jessica Hayles) alerts them to the great danger they face.

Clara and Rigsy soon make the connection, with the Doctor's guidance, that the danger is in the form of two dimensions, with the Doctor theorizing that they want to be three dimensional.  That means that these beings are now going after them.  Clara, Rigsy, and the work crew now flee for their lives, with sarcastic crew head Fenton (Christopher Fairbank) asking if they really are hiding from killer graffiti.  Soon more of the crew begin being attacked by The Boneless (the name the Doctor has given them), though whether they are truly a menace or not is still debated.

The crew finds that the Boneless can control three-dimensions to make them two-dimensions.  The TARDIS and the Doctor are still too small to help apart from advising, and in the confusion and chaos Fenton tries to steal the TARDIS only to cause it to fall onto a train track.  The TARDIS is in danger of being crushed.  The Doctor manages to barely put it out of danger but then the danger returns, forcing him to put the TARDIS in siege mode.

Clara, facing the life-and-death decisions the Doctor usually finds himself dealing with, has a brilliant idea on how to both help the Doctor and impede the Boneless.  She uses one of the Doctor's best tactics: use your enemy's power against them, and thanks to that the TARDIS is restored to where he can step in and wipe the Boneless to another dimension.

As I thought on Flatline, I had a rare moment of tension and suspense in Doctor Who.  This came when the Doctor, trapped in his shrunken TARDIS, is forced to use his hands to crawl the TARDIS out of the oncoming train.  In other hands I imagine the sight of an Addams Family Thing-type creature would almost be laughable.    However, credit has to be given where it is due: both Mathieson's script and Douglas Mackinnon take the situation seriously.  As a result, the moment, far from being silly, is filled with almost nerve-wracking tension as to whether the Doctor will manage to pull himself to safety.  Doubling down on the tension, once we think he's made it to safety we get thrown into more danger, causing the Doctor to put the TARDIS into siege mode.

I cannot recall when I have felt more tension while watching Doctor Who in the Revived Era, especially in a single episode versus a two-parter.   In a two-part story, we can have a cliffhanger that sometimes has been hit-and-miss.  This particular moment in Flatline brought to mind a cliffhanger in The Curse of Fenric (which I think was the last classic story from the Classic Era).  Watching that story, I got so caught up in the story that I found myself at one point shouting at the screen, "Doctor!  BEHIND YOU!"  I didn't shout at the screen watching Flatline, but the story moved so well and built the tension so well that there was genuinely fear and suspense as to everyone's fate.

Flatline allowed the characters to be real, from Clara's haughtiness on being "Doctor Clara" to Felton's selfishness and lack of compassion.  When contact was made to The Boneless, we found they call numbers. The number called was from the uniforms the crew was wearing, and it signaled that one of them was in mortal danger.  "Looks like your number's up, George," Felton says.  Fairbank's delivery made it both a bad joke and a genuine statement of fact.

I figure Rigsy is evocative of the graffiti artist Banksy, and while I didn't think Wade was given much he certainly had the potential to be a good Companion.

What I really enjoyed was Capaldi's performance.  The Doctor is basically sidelined, but Capaldi never shrinks from being the main character.  Whether it is in being irritated by how Clara is behaving while he is unable to move or in showing an actual light side when he does a little dance when he thinks he's escaped being crushed, Capaldi is spot-on as The Doctor.  Once he's restored to full size, he compliments Clara when she insists she was a good Doctor.  However, while he tells her she was an exceptional Doctor, "goodness had nothing to do with it".

The resolution was logical and even Coleman, who has nowhere near been my favorite Companion, is commanding and effective.  It shows how a great script and positive direction can do wonders.

About the only thing that didn't work was the intrusion of Samuel Anderson's Danny Pink via a phone call coming at the most inopportune time (cliché) and the closing moment with Michelle Gomez's Missy, declaring that with Clara, she had chosen well.  However, I figure Mathieson was required to insert them in by Moffat, which is a shame because if they had been cut altogether we could have had a Doctor Who story that pushes the series into what it COULD be: dark, dangerous, exciting, and removed from the burden of having to carry long story arcs that more often than not fail to pay off.

Flatline is as close to a Classic Who episode that we are likely to have.  It was tense, exciting, logical, fast-paced but without being rushed or convoluted.  It is a sign that Doctor Who, when unburdened and unleashed, can be a brilliant science-fiction program.  It's enough to make a despairing Whovian break out in dance... Next Story: In the Forest of the Night
Posted by Rick at 10:35 PM