Please Get Me to the Church on Time. Doctor Who Story 182: The Runaway Bride 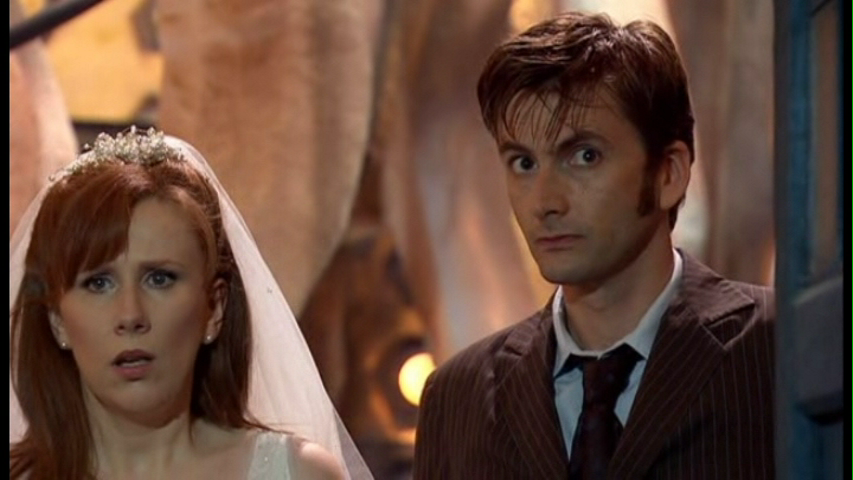 It has been a long time since I've touched a Tenth Doctor story.  This is especially true with anything post Love & Monsters, as I was so disgusted and horrified by that episode that I essentially quit watching Doctor Who until Tennant left.  Now, I think it is time I return to those 'lost episodes' and complete the Tenth Doctor retrospective.  With that, I go to his first story of Season Three: the Christmas special, The Runaway Bride.

The Runaway Bride is a curiosity in the Doctor Who Christmas special category in that it actually has little to nothing to do with Christmas.  While technically set on December 24 or 25, the actual celebration of Christmas is irrelevant to the story.  It might just as well have taken place at Easter, or the Queen's Birthday, or Yom Kippur, or Eid al-Fitr, or Super Bowl Sunday, or any other holy day.  There were brief mentions of it, the return of the Killer Clauses from The Christmas Invasion, but really Christmas was not important to The Runaway Bride.  It's as if, for once, NuWho figured out that maybe we could have a Doctor Who Christmas special that was more Doctor Who and less Christmas.

The Doctor (David Tennant) still in deep mourning for his former Companion Rose Tyler, finds himself stunned to see a woman in a wedding dress suddenly appear in the TARDIS.  Said woman, Donna Noble (Catherine Tate) is equally stunned...and furious!  Shouty and angry, she is outraged that she has been abducted as she was walking down the aisle with Don Gilet (Lance Bennett).  The Doctor manages to land on Earth and she angrily storms off to get back to her wedding.  The Doctor is still puzzled as to how any of this could be going on, but he also sees the Killer Santa Clauses from The Christmas Invasion coming his way.  He rescues Donna (who has been taken by one of the Killer Santa Clauses) and they go up on the roof to allow for the TARDIS to recover.

Soon, the Doctor finds that Donna has massive amounts of huon particles in her system (which is how she found herself aboard the TARDIS, her particles being drawn to the TARDIS').  At the wedding reception (which is taking place despite there being no wedding and no Donna), the latter is more upset and there are literal wedding crashers: the Killer Clauses.  Another escape and with a reluctant Don they go back to HC Clements, the company where both Don and Donna work.

It's only now that I realize that the bride and groom share a name: Don/Donna.  Make of that what you will.

Well, there we encounter the Empress of the Racnoss (Sarah Parish), a combo spider-lobster type creature who is behind all this and, in an uncharacteristic move on Doctor Who, is 'the last of her kind'.  Seriously, we're only about three seasons in and already this 'last of their kind' thing has already become a cliché.

The Empress worked with Don to use Donna as a human 'key', Don slipping huon particles into her coffee as he endured her besotted nature. In truth, he cannot tolerate Donna, her obsession with pop culture particularly grating to him. The Empress now is determined to bring about the return of her 'babies' the eggs laying deep within the Earth.  The fact that the Time Lords wiped her community out will only make her victory over the Doctor all the more sweet.  Well, both Doctor and Donna escape, leaving poor Don as the only substitute for the key from the Head of Human Resources. A quick trip to the formation of the Earth shows that the Racnoss placed themselves in the Earth's core and now the Doctor and Donna are going to take on The Empress.

To show his compassionate side, the Doctor offers the Empress and her children a planet where they can live away from the humans.  She refuses and is determined to conquer Earth.  With that, the Doctor strikes: flooding the secret lair and drowning all the baby Racnosses.  The Empress escapes onto her waiting ship (which looks like a big Christmas star) but on orders of "Mr. Saxon" it is destroyed.  Donna declines the Doctor's offer of being the Companion, and the Doctor sails off.

As I ponder The Runaway Bride, I see the flaws and virtues of the Revived Doctor Who Era all wrapped up in it.  Neither horrifying or brilliant, on the whole it worked well and I cannot fault it for that.

There were things I didn't like at all.  A big problem was that almost everything felt very rushed and frenetic, down to the music (oh, Murray Gold...will you ever gain my heart).  The music, the pacing, the wild hysterics of Tate and Tennant did make this look like a comedy (or at least what they were aiming for).  Perhaps it was, and I missed the point of this Christmas Special: that it was suppose to be funny.

However, I didn't laugh, and sometimes I found Donna grating in her bossy, shouty demeanor.

Then again, I go to the scene up on the roof, about the only moment in The Runaway Bride where things were calm and paced.  This was a wonderful moment, precisely because it was all calm and still.  It allowed for character development and exploration, and a chance for these two characters to show a range beyond frenetic (The Doctor) and shouty (Donna).  Here, the Doctor's mourning for Rose doesn't quite appear to be the LOVE story NuWhovians clamor for, but instead a loss of a Companion, a mate, a way to ward off the loneliness.  Donna for her part, does her own version of I Remember It Well when it comes to her own story: not remembering any of the big events that took place in Doctor Who and showing that perhaps what the Doctor needs isn't romance, it's a friend.

There were also good lines that were amusing and clever.  "Only a madman talks to thin air, and trust me, you don't want to get me mad," The Doctor says.  Another one to note is when the Doctor says, "Director of Human Resources.  This time, it's personnel", a pun I've grown fond of.

In terms of performances I think Tennant did a real good job here.  He got the frenetic, slightly comic part down, but when he is a Menacing Doctor, he is equally effective.  Tate's character was meant to be slightly grating, so she too did an excellent job as the storming Donna.

If ONLY we didn't get such familiar tropes in The Runaway Bride.  The 'last of their kind' business.  A bizarre monster who wasn't all that interesting (and her saying such things as "Eat you up, all snick and snack" doesn't make me take her any more seriously as a threat).   The 'dumb' boyfriend (though making Don a villain was a nice change...albeit expected, who else could have done it given the shortness of time).

I give Russell T Davies credit in doing what no other Christmas Special would do: not center the episode around Christmas.  In this Christmas, it isn't snowing (except at the end) and they are not celebrating Christmas.  In fact, Donna explains the reason she is marrying on Christmas Day is precisely because she HATES Christmas, so she'd rather celebrate that than the Birth of Christ.

Also, the spaceship looking like a Christmas Star...no go for me.

I think The Runaway Bride was meant to be a nod to the past (Killer Clauses) and a teaser for the upcoming season (dropping the "Mr. Saxon" business was meant to tie this in to the future).  I guess you could say this was a bit of filler between the past and the future.

Not horrible like future Christmas Specials, not wonderful either, The Runaway Bride kind of sits in the middle.  Given how dire the show will become, that's really not a bad place to be.