The Ice Capades Of The Doctor We go to the same pattern with Doctor Who on Season Ten that we've seen with the show.

Episode One: Meet the New Companion.
Episode Two: Travel Far Into the Future.
Episode Three: Travel Into the Past, British History Only (far be it for a show about travel through time and space to visit Byzantium when Suleiman was laying siege to the fabled city).

If it sounds like I'm complaining, let me dispel you of that.  Thin Ice, the Episode Three of this pattern, is something that I haven't seen on Doctor Who of late: a smart, well-written, well-acted story.  It had monsters, menace, and a touch of humor.  Overall, Thin Ice is a sign that the hiatus might have done the show a world of good.

The Doctor (Peter Capaldi) and his newest Companion, Bill (Pearl Mackie) aimed to go back to present-day, but ended up in 1814, February 4th to be exact.  It is the last great Frost Fair on the Thames, and Bill is highly concerned about how her race will impact her presence there (slavery is still legal at the time).  The Doctor dismisses her concerns, especially when we see so many black people running around, even being in the military.  He tells her that there's a lot of whitewashing of history and that there were more blacks in history than has been told.

Even Jesus was black, he assures her, a point of debate but I digress.

Bill is also concerned about how her presence could alter the whole of history, how if she steps on a bug there could be chaos in the future.  The Doctor pokes a little fun at her expense about that, but then tells her things will be all right.

Things aren't all right though, after a pickpocket steals The Doctor's sonic screwdriver.  The leader of the urchins, Kitty (Asiatu Koroma) sees her accomplice swallowed up by a monster who encircles its prey with little lights.  The Doctor and Bill also see this and are horrified, though the Doctor is not as broken up about it as Bill is.

He has seen death, and caused it, too many times to be that involved. 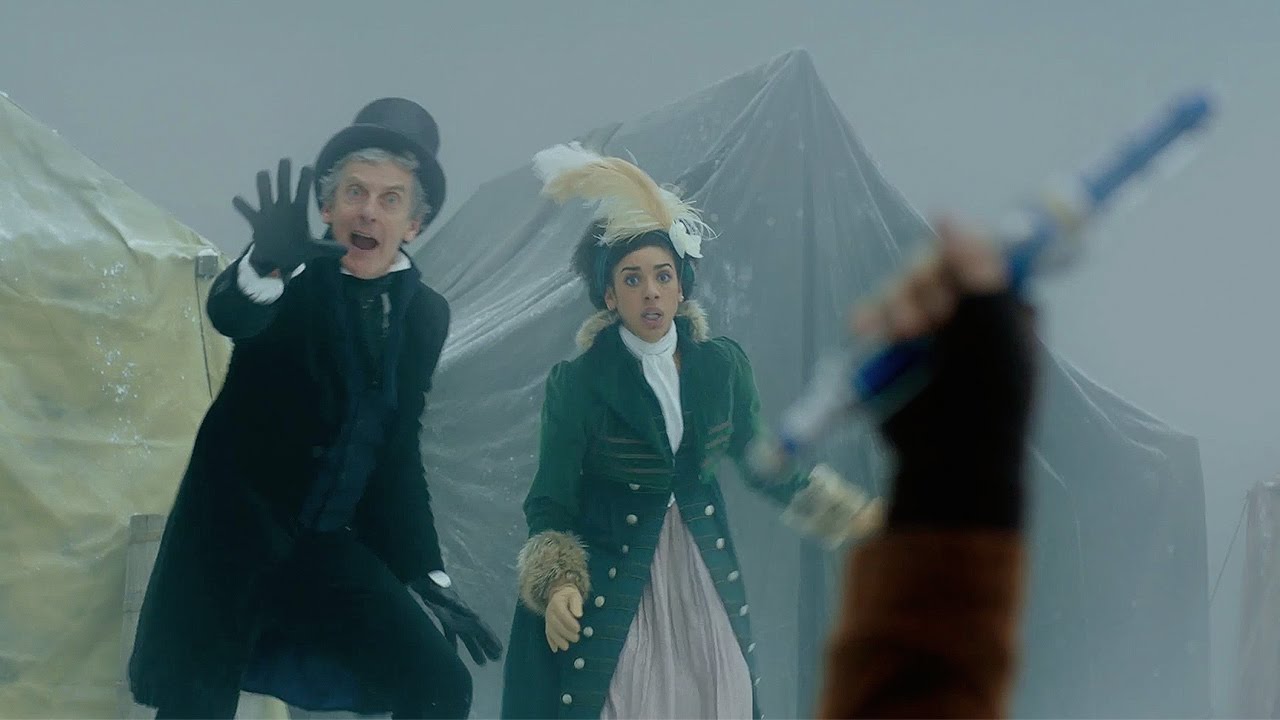 The Doctor and Bill now work to solve this mystery and end the horror (not to mention, save others from a similar fate).   They literally dive in to find beneath the Thames is a giant fish monster, and that it has been feeding off humans.  Kitty also tells them that the urchins are paid to lure people to the Frost Fair, and thus, to the monster (though the children know nothing of the monster itself).

The villain is Lord Sutcliffe (Nicholas Burns) whose family has enriched itself for centuries thanks to the monster, which they keep chained and whose waste they sell to provide power great than that of coal.  Lord Sutcliffe is enraged that Bill would receive him sitting down, and the Doctor is outraged that Sutcliffe would use humans to profit, seeing him as the real monster.

Sutcliffe decides to kill two birds with one stone by having the Doctor and Bill killed with a bomb, and that bomb will bring more food to the chained-up monster.  The Doctor, however, has a few tricks up his own sleeve.  They escape and warn people off the ice with help from the urchins, and when an enraged Sutcliffe sees they haven't been killed he accidentally falls into the water.  The bomb had freed the fish monster and taken Sutcliffe, and the Doctor alters Lord Sutcliffe's will to make one of the urchins his long-lost heir.

Back to the present, Nardole (Matt Lucas) scolds the Doctor for taking this little side trip, reminding him of the Vault that has to be protected at all costs.  Nardole goes down there to hear it knocking, telling whatever is inside that it won't get out. Thin Ice has a couple of curiosities, particularly due to race.  Bill, as a mixed-race person, worries about how her presence in Regency-Era Britain will make her stand out, but we see many black people at the Frost Fair (Kitty among them).  There is an attempt to cover that by saying that there is more blackness in history (down to Jesus Himself being black) but given that Doctor Who is fantasy, I wonder if the audience would have given it a second thought.

For example, when Lord Sutcliffe became angry at seeing Bill seated in his presence, I put his fury up to class, not race. Put that up to my naïveté, but I didn't think race was that important.  It is also the fact that we see many black actors in Thin Ice in both supporting and non-speaking roles that I wonder if in the end, Bill's race was that important.

I also disliked a scene where we end with Bill about to say, "No sh..." and cut out the rest with a horse's neigh.  It is a family show, and yes, they cut off before Bill could finish saying something, but I'm wary of moments like those.

However, those are minor points, as Thin Ice harkens back to more traditional Doctor Who: an otherworldly mystery, some humor, and a sensible plot (the last being the biggest surprise given how convoluted the show has become).  It has a mild negative in that it harkens back also to another NuWho episode (The Beast Below): a chained-up monster, children in danger, the monster being used/abused by humans, the Doctor releasing it, and all ending well.

Still, what we have in Thin Ice is a good, tight script where the elements came together (a fisherman who appears briefly is tied into the story later on).  We also have some fun with a trope of time-travel shows: the idea that being there will alter the whole of human history.  Mackie's performance underscores the humor in those moments of Bill's worry: her excessive worry being fodder for the Doctor's jabs at her fears.

Mackie does a great job not just in Bill's fears, but in her joy at being in the past and her anger and hurt at the Doctor's curious reaction to a child's death (though again, for a family show, is suggesting a child's death a bit much).  There's a strong sense of tension and fear in Thin Ice, and that comes not just from the script but from the performances.

The Doctor too is in fine form.  Capaldi's mix of regret and remoteness, his anger at the abuse Lord Sutcliffe inflicts, and his teasing of Bill all shape a great performance.  It solidifies my view that Capaldi could have been a great Doctor if not for the scripts.

Burns' Lord Sutcliffe was a bit weak as the villain (he was missing the mustache to twirl) and the character wasn't overwhelming, but that is probably due to the rushed nature of the episode,

Still, despite some weaknesses, Thin Ice is a pretty solid Doctor Who episode, and one of the better ones to come down the pike in a long time.

"Passion fights, but reason wins," The Doctor tells his Companion when explaining why he didn't just take a swing at Sutcliffe to start with.  Many a true word (though if memory serves correct, he does take a swing at him later).

Humor and horror...on the whole, Thin Ice is pretty strong.

Next Episode: Knock Knock
Posted by Rick at 11:54 AM