The Only Thing We Have to Fear 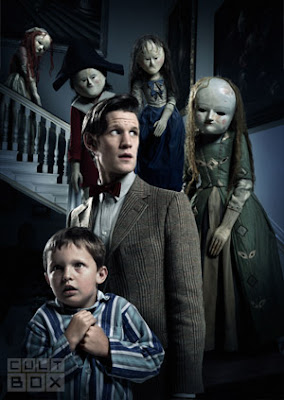 All children are afraid of monsters, under the bed, in the closet.  It is common in children's stories for there to be something lurking in the dark, something menacing, dangerous, that will put a child's life in peril.  It is that fear that children have, of which they are conscious of, that shapes one: either to outgrow them (and slowly take up the burdens of adulthood) or to become overwhelmed by them (for some people, fear is a way of life).  Night Terrors capitalizes on the common fear factor in children to great success.

In contemporary London, little boy George (Jamie Oram) is terrified of everything: the noise of the lift/elevator, the old lady neighbor, the landlord, old toys.  All the things George is scared of (minus the humans) are thrown into the cupboard in George's room.  George, however, is still afraid: so afraid that he calls out for help, for someone to "save me from the monsters".  Fortunately for him, this message crosses time and space, to reach The Doctor (Matt Smith), who whisks himself and his Companions, Amy Pond (Karen Gillan) and her husband Rory Pond...I mean, Rory Williams (Arthur Darvill) to George's estates home (what we in America would call the projects).

George's parents, Alex and Claire (Daniel Mays and Emma Cunniffe) are extremely worried about their son, and think that perhaps he should see a Doctor.  Miracle of miracles, there's one that makes house calls.  While Claire is at work (after having repeated George's ritual of turning the lights on and off five times), it's Alex that greets the Doctor.  The Doctor is his usual frenetic self, but who is able to comfort the boy at first.  When he wants to open the cupboard, the Doctor becomes alarmed, even terrified.  Alex has his own problems: dealing with landlord Jim Purcell (Andrew Tiernan), who not surprisingly scares George.

Meanwhile, Amy and Rory have taken a frightening ride in the lift, and find themselves in a dark empty house.  Rory at first believes he's dead again (even this guy knows it gets a bit silly) but we find that they are in a house with odd materials and dolls.  To their horror, they find that the dolls inside the house are very much alive, and that they turn any human there into dolls.  To Rory's horror, Amy herself is captured and becomes a doll (surprising in that it wasn't Rory who met a grim fate this time).

Eventually, the Doctor and Alex find the courage to open the cupboard...to find clothes and a doll house.  However, something is off, and the Doctor comes to find what it is: even while George is their son, the photos of Claire a month before his birth show she's not pregnant, and Alex remembers Claire can't have children.  How then, to explain George?  No time to think, since Alex and the Doctor are sucked into the cupboard and into the doll's house (I wonder if Henrik Ibsen was an influence).

We then discover that George is a Tenza, an alien being who hatches and becomes whatever its adoptees want it to be (in this case, a son).  George's fears stem from a fear that he is going to be sent away by Alex and Claire, and Alex is a bit reluctant to embrace an alien as his child.  However, as the dolls (including Amy), begin to surround George, Alex's fatherly instinct kicks in, and promises George never to abandon him.  With that, the fears cease, and all is restored.

I think that what elevates Night Terrors is the fact that it is so obviously a parable about the fears all people have either as children or adults.  It's not just about monsters per se, but about fear of abandonment, about whether we are truly loved by the parents.  It also goes to the fears parents have: will I be able to protect my child, will I be able to embrace a child I know is not mine.  Mark Gatiss' script is very smart about keeping things moving and filling in the audience about things that are obvious.

The performances are far and above what we've seen in previous episodes.  Guest star Mays keeps an amazing balance between the caring father and the comic relief in his fears and frustrations over George along with his befuddlement over what is going on and exactly who and what the Doctor is.  It is one of the best performances of the series,

Darvill, in a rarity, takes a more active role in Night Terrors than he's done.  He isn't the comedic aspect of the story.  This is primarily because he, not Amy, is the one who is transformed.  Instead, being the one kept alive allowed him an urgency and a chance to take charge.

As a side note, it is a curious thing that Night Terrors is a remarkably male-centric story.  From George to Alex to Rory & the Doctor, women were relegated to almost nothing in Night Terrors.  Of course, given that the subtext was the story of fathers and sons, it is no surprise.

Director Richard Clark kept a steady pace, building suspense upon suspense.  He never let up on how he kept withholding the revealing of the monsters, primarily by keeping the viewer officially out of the cupboard as long as possible.  This despite the fact that, again, it was obvious that Amy and Rory (along with the neighbors caught up in the mayhem) were inside the cupboard.  Again however, I would argue that Gatiss' script was suppose to be obvious.  Both Gatiss and Clark made a good old-fashioned horror story with Night Terrors, a Doctor Who that will have the children hiding behind the sofa but with the positive message that a parent (noticeable a father, a figure that sadly plays less and less of a role in children's lives) will in the end, protect them.

It is a brilliant idea brilliantly executed.  Few Doctor Who stories are clear about positive messages to its youngest viewers and address things straight to them, even more rare in the revived series.  Night Terrors is an episode for them, to let them know that in the end, the Doctor, as good as he is, can't provide the protection they need as well as their Mum and Dad.  It also makes clear that they as children eventually have to face their fears, and that they can defeat them.

If it has any faults it is, oddly enough, in its obviousness.  It also is reminiscent of both The Eleventh Hour (a child is afraid of something in their room only to have the Doctor show up and find that the scary thing was something alien) as well as the film Poltergeist (the scene where Alex and the Doctor are taken into the cupboard required only for George to say, "they're here").  The fact that George turns out to be an alien appears to be thrown in to give Night Terrors some sense: the reason the fears come alive is because he that has them causes them himself, and that's because he's not human.  To my mind it didn't quite fit, but if George were human, it would have come much closer in making Night Terrors more Poltergeist in nature.

Night Terrors is scary without being too scary for the intended audience.  It has a positive message, and in a rare move, all ends well for everyone concerned (everyone is restored and George overcomes his fears).  Without the Eye-Patch Lady or River Song in the mix, we find that Doctor Who doesn't need gimmicks to make good stories.  Instead, by going back to the basics, Night Terrors show us that we will fear no evil.

In Episode: Zero (though he thought he was dead)
Overall: Four
8/10
Next Story: The Girl Who Waited
Posted by Rick at 7:42 AM