What Are You So Afraid Of? 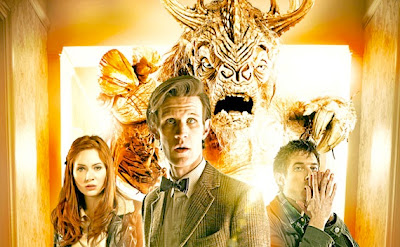 The Doctor (Matt Smith) and his Companions Amy Pond (Karen Gillan) and her husband (Arthur Darvill) find themselves in a mysterious hotel.  We already know what they don't: this hotel is creepier than the Overlook in The Shining.  There is a monster out in the corridors, hunting those inside down.  Every room is special to one being, containing that which frightens them more than anything else.  Once they are finally overwhelmed by their fear, they are powerless, except to "Praise him" before they are killed.

The Travellers soon come across three others trapped inside Horror Hotel (the name I've given it). Two are human: blogger/conspiracy theorist Howie (Dimitri Leonidas) and medical student Rita (Amara Karan).  The third is an alien: Gibbins (David Walliams), a Tivolian from Tivoli (the most invaded planet in the galaxy).  After it's established that the new arrivals are not part of what's been menacing them (Rory tells them that they are nice, much to Amy's irritation), they tell the Travellers of Joe (Daniel Pirrie), who is close to insanity.  He's literally tied up in the dining room, surrounded by ventriloquist dummies.  Why dummies?  Well, he used to be afraid of them, but not anymore.  He's ready to "praise him".  Soon, he is broken free by invisible forces and surrenders to 'him'.  While there are no injuries to his body, he is dead.

The Doctor figures things out: this hotel literally feeds off the fears of the beings trapped. The very British Rita (her response to this crisis is to make tea) has another theory: she's in Jahannam (the Muslim idea of Hell).  We then get a small recap of what we saw in the opening: the previous survivor's final notes explaining how her fear overwhelmed her to 'praise him'.  Soon, Howie becomes infected to 'praise him'.

We soon see what is menacing them: a literal Minotaur.  The Doctor learns from him that the Minotaur doesn't want to kill, but is compelled to.  Soon, he offs Howie (who room contains his greatest fear: girls).  Even Rita, whom the Doctor thinks would make a great Companion, falls prey, but gets the Doctor to block the viewing of her death.  The Doctor realizes the truth: the Minotaur doesn't feed on fear but on faith.  Those who are about to die reflectively go back to their faith to protect them, and this seals their fate.  Rory has never found his room because he isn't religious (like Rita) or superstitious (like Joe the gambler).  It's next target is Amy.

Amy thus is forced to face her faith: her faith in the Doctor.  As the Minotaur comes closer to Amy's room, the Doctor easily breaks her faith in him (emphasis mine).  With that, the Minotaur dies and we find that the hotel is really computer-generated.  It was a prison where the Minotaur was placed but given this 'food', but which got stuck in repeat somehow.  The Doctor takes Amy and Rory back to Earth, and tells Amy they must live their lives.  With that, he does the unthinkable: he leaves them.

Toby Whithouse's script for The God Complex is brimming with ideas, good ideas, that never come to fruition.  The idea of a monster feeding off people's fear is a great idea.  The fact that it's a Minotaur and that the Horror Hotel so obviously resembles the myth of the Labyrinth makes the story look almost lazy.  The God Complex, at least to me, is reminiscent of the miniseries of the Stephen King novel It.  In that story, the clown Pennywise menaces a group of children and then as adults in terrifying passion, only to find that the cause of all that menace was a giant spider.  Minus the spider, It was a terrifying story.  Likewise, The God Complex has as its villain a monster than never actually causes the horror.  Even worse, the Minotaur doesn't want to do it (a case of 'I can't help myself').

Again and again, the ideas in The God Complex are floating about, only to be pushed down in the weakest excuses.  The fears that menace the residents of Horror Hotel, while intimidating to them, look almost laughable to most of us.  Girls?  Seriously?  That the blogger is afraid of girls is sadly stereotypical (aren't all nerds scared of girls), but when we see Rita's greatest fear, we wonder how someone as bright and rational as her could be so terrified of not meeting her father's approval.  You've got a room where the fear is a clown, and I thought, 'boy, that room must be reserved for Ace'.  Also, we have to wonder what would happen if, by any chance, the people upon facing their fears do manage to get the courage to overcome them, even defeat them.  Would they go back to their home worlds?

It could be that The God Complex goes so disastrously wrong because we find that the only person who is afraid of nothing...is Rory!  Of all the people who find themselves terrified by disapproving fathers and the opposite sex (wonder what would have happened if Howie were gay), it's the man who's died a thousand times who is the man without fear?  The one who is, or was, suppose to be the comic relief?  The bumbler?  The dimwit?  Even the Doctor has a fear (in Room 11 no less, which looks cute but again not a surprise they would pick that number), although we obviously won't see what his fear is.  Even he isn't surprised or afraid of it, more bored with his greatest fear.

Whithouse's script doesn't provide any fears (having the villain be a machine seems a cheap way out).  It's a curious thing that Whithouse wrote The Vampires of Venice (which I voted the Worst Story of Season Five).  Minus School Reunion, Whithouse with The God Complex has come up with two simply terrible stories two seasons straight.

This isn't to say The God Complex doesn't have some good things in it (apart from the idea of fear killing, if not the execution).  The best thing is Karan's Rita.  Her performance is excellent: she is a bright woman who is also a woman of faith.  It's so rare to show someone who is bright and who believes in God (if anything, Doctor Who is fully indoctrinated in the Richard Dawkins school of thought that only atheism makes sense).  I digress to say that in all their Winter Solstice specials, the idea that this thing called Jesus had ANYTHING to do with Christmas and has always gone out of their way to ignore the religious aspects of the Christian holiday.  The idea that a Muslim character, who is devout but rational, is presented as a potential Companion, is a positive step.

It certainly is a positive step to show a Muslim as equally religious and British.  I always applaud whenever a person of faith is presented as an intelligent, rational person, even one with a sense of humor.  My concern is that the script had a line about her Islamic faith.  When the Doctor sees that Rita is Muslim, she softly tells him, "Don't be frightened".  Somehow, I feel insulted that Whithouse would think the mere fact that she was Muslim is something to fear.  Perhaps it is because I have Muslim friends (who are actually far more politically liberal than I am), but that like struck me as a bit unfair to both the character and the audience.

I digress further to wonder if Rita were instead an Evangelical Christian would she have been so positively portrayed.  Christians have a point in one sense: most television and films that have Evangelical Christian characters tend to be shown as fanatical, intolerant, almost borderline psychotic.  I find it strange that Doctor Who has no problem bringing in a Muslim character to mention Jahannam, but the mention of Jesus (even on His birthday) is verboten.

Nick Hurran's direction is good given that he tried to build up terror.  That it didn't work is more the fault of the story than his directing of the actors.  One thing I would fault him with is with the music.  Sometimes the music indicates that The God Complex is almost a comedy while the situation appears to make it a thriller.  The idea that this is a comedy also goes with Walliams' Gribbs, the alien whose planet is constantly conquered (he tells them that their anthem is All Hail...Insert Name Here).  It never worked, and neither did both the resolution where Amy almost automatically gives up on The Doctor (something that happened in a snap) or finding where they were (which looked like they had all been trapped in a revamped TRON) and the denouement.

What should be a tender, heartbreaking farewell between Amy and Rory Pond feels rushed and horned in to fill time. While watching it, all I could hear was "never can say good-bye..."  Finally, the fact that the idea that FEAR is something to be faced was covered in Night Terrors two episodes earlier.  Having a similar theme in stories so close together is not Whithouse or Hurran's fault, but it not a good idea to have them so close together.  They almost look like companion pieces, though I doubt that was the intent.

In the beginning of The God Complex, the Doctor refers to them as "the Ponds", and I think by this point Rory no longer cares if he's thought of as Rory Pond.  In the same scene, the Doctor calls Rory "Beaky", mocking his nose, but I heard it as "Mickey", going back to an earlier Companion, and again, I think Rory no longer cares.   I don't blame him.

As for my greatest fear?  That Doctor Who make more episodes as idiotic as The God Complex.