A Kiss Before Not Dying 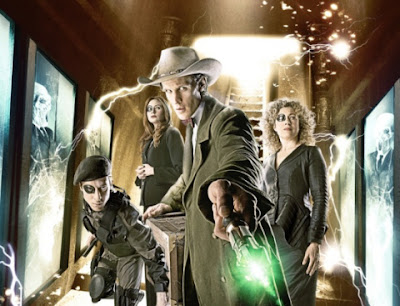 STORY 231:
THE WEDDING OF RIVER SONG
Truth be told, I thought we'd forgotten all about her.  Alas, River Song, like all monsters, have to have one last good riddance appearance before going off to hopefully never be seen again.  Thus is the case with this Legendary Legend of Legendness, who not being satisfied with being a bane of my Doctor Who-watching experience, now has finally achieved her true goal.  No, not killing the Doctor, but having her name in the title.  The Wedding of River Song wraps up Series/Season Six.  I can only ask those NuWhovians who think Doctor Who began with Rose to explain WHY IN GOD'S NAME YOU THINK SHE'S SO DAMN IMPORTANT AND BRILLIANT.  She's a horrible, useless creation, one that has been an irritant ever since she left guest-star status from Forest of the Dead Parts 1 & 2 (Silence in the Library/Forest of the Dead) and was inserted as this mythic creation that was vital, VITAL, to the Doctor Who mythos.  The Wedding of River Song is nothing more as the triumph of the NuWhovians over those who look to the classic series.  It is a dividing line between the original series and creating something different under the same name as Doctor Who.

The Doctor now tells his story.  He was suppose to die at Lake Silencio, killed by River Song (Alex Kingston).  He has been on a chase through time and space, trying to find the reason WHY he has to die.  The Teselecta from River's Secret Part 2 (Let's Kill Hitler) gives him some clues, leading to Dorian Maldovar (Simon Fisher Becker), now a Headless Monk after the events of River's Secret Parts 1 & 2.  He tells him that the Silence, which is a religious cult, cannot have The First Question asked.  The Doctor believes he can outrun time, until learning of the death of the Brigadier.  With that, he opts to face his own death.

However, River, so deeply in love with the Doctor, simply cannot do it.  She does not kill him, and as a result, time is collapsing.  Events in history are colliding upon themselves (hence having Churchill and Cleopatra be contemporaries), having unofficially frozen on the exact time and place of the Doctor's death.  The Doctor and Churchill are menaced by the Silence, until rescued by an eye-patch wearing Amelia Pond (Karen Gillan).

She tells the Doctor that she has managed to remember the real history along with the world as it is now.  She whisks him on the train to Area 52, deep inside an Egyptian pyramid.  The eye-patch (or as I call it, iPatch) contains a drive (an iDrive) that helps people remember the Silence after seeing them.  In Area 52, there are over a hundred Silence captured, along with Madame Kevorkian....I mean, Madame Kovarian (Frances Barber), prisoner, as well as our be-hated River.  The Doctor attempts to get time going by touching, but nothing doing.  However, all this was an elaborate trap by Kovarian and the Silence, with them waiting for the Doctor to come so as to kill him.  Thanks to Captain Williams (Arthur Darvill), or as the Silence call him, The Man Who Dies and Dies Again, they escape, but Madame Kovarian meets a gruesome end when her eye-patch goes bonkers.

River has set up a distress signal to all space to help the Doctor, but he refuses help, telling her he must die.  With that, they get a quickie marriage, allowing them to kiss and get time started.  We see the Doctor die at Lake Silencio, but not before he whispers something to River, which he says is his name.  Now Amy and her daughter reunite, where River tells Mommie the truth, a joyful truth: the Doctor Faked His Death.  It was the Teselacta that took the bullets for him!  The Doctor returns Dorian to his Headless Monk chamber, with him shouting the First Question...

I figure Steven Moffat, when writing The Wedding of River Song, was having a jolly good time.  Whovians, in particular NuWhovians (those whose first story was Rose and anything after), would be thrilled and shocked by all the twists and turns in the story.  NO ONE, he I think he thought, would figure out that the Doctor did not really die.

I don't want to say that I am highly intelligent, but it is the only logical solution to this conundrum would be to have a doppelganger take his place.  Given that in The Gangers Parts 1 & 2, the Doctor first learns that he is to die, he would be wise to find someone to take his place, and with River's Secret Part 2, what better source than the Teselecta?  I always thought a robot would be the one to fill in for him at Lake Silencio.  I had that suspicion even during Day of the Moon Part 1 (The Impossible Astronaut).

Maybe it is because Moffat was unconsciously channeling Back to the Future.  For those of us who've seen it, we recall that Doc Brown appeared to have been killed again even after Marty had tried desperately to give him warning when they met in the past.  Doc insisted that if he was to die at that time, he had to do it because he could not change history.  We find of course that he did indeed survive (having worn a bullet proof vest) because he did indeed read Marty's letter and thus came prepared.

Likewise like that Doc, our Doc has A.) had prior warning about his death, and B.) came prepared.  I'm sure Moffat would say he had this all thought out long before the cameras rolled and it was all original, but to me, that is what I saw: a repetition that left no real suspense.  It was all introduced to us, and while it is logical it is also so obvious that it defies logic to think anyone would be surprised he had a double in Lake Silencio.  It is shocking to think that anyone would say, "WOW!  It was the Teselecta that took the bullets for the Doctor!"

Also, as with River's Secret Parts 1 & 2, is it me or does The Wedding of River Song leave some points of logic unanswered?  If the Doctor never told River his real name here, what exactly does River tell the Doctor in Forest of the Dead Parts 1 & 2?  As I understand it, she knows his real name  here, but now she doesn't?  Well, I leave it to the NuWhovians to answer that question for me.

There were also some issues I had with the actual story.  The endless race to get to the reason why the Doctor should die appeared to be a bit of padding: going from the Mos Eisley Cantina to a Death Chess Match to the Headless Monk could have been trimmed (unless we had to have the Death Match to allow a character to die by being devoured by skulls, rather gruesome at most).  Also, we revert to the tried-and-true of having Rory be the idiot we've grown to love (although there is a reason why he doesn't realize he's River's father).  Madame Kovarian still doesn't appear to have a real reason to be so murderous.

As a side note, I don't have too much trouble with Amy allowing Kovarian to die, although there might have a been a way to have her die.  It is a bad thing to have a Companion basically kill someone, but given what she did to her daughter, it might make it more a rash decision than premeditated murder.  Still, it does make one a bit wary about Amy's actions.

There are however, some good things in The Wedding of River Song.  The opening where time has folded on itself and all of history happening at once is an eye-popping start.  Even though the death of the Brigadier takes place off-screen, it still has an emotional impact (Jeremy Webb's directing of the scene making it more sad).  The skulls of the Headless Monks are appropriately creepy, even scary.  It is good to see Darvill take a more heroic role as Captain Williams, showing he can play tough characters as opposed to the generally wimpy Rory.

We also get nods from Moffat to the fans.  While in the Pyramid in Area 52, River tells the Doctor that there have been many theories about their relationship: is she the woman who marries him or murders him (it's really a bit of both, but I digress).  I think this is a smart line given that for the longest time fans sans moi did discuss what exactly their relationship would be.

However, why do I keep thinking that The Wedding of River Song would have been better as a two-parter?  Like most NuWho episodes, a lot of information is slung at us with not much payoff.  I truly think that if more time had been devoted to how the Silence and Kovarian brought the Doctor and River together rather than everything in Closing Time we might have wrapped up the season/series much better.

I also don't believe that River was acting when she was at Lake Silencio (or this timey-wimey deal of her being in two places at once) or that she always knew she was Amy and Rory's daughter (a plot point that I've never believed and found stretches things).

On the whole, The Wedding of River Song has in its favor a logical (though obvious) solution to the problem we found in the opening (namely the death of Doctor Who).  However, the emphasis for River over the Doctor hampers the script.  The fact that The First Question almost appears to be spoofing the series (or a set-up for the 50th Anniversary next year) does it no favors.  I figure NuWhovians love River and think highly of this episode.  However, this is one wedding I have no interest in crashing.