No Nude Is Good Nude

As I got through Doctor Who Series/Season Six, I couldn't help think that something was amiss.  Is it me, or has Doctor Who suddenly gone off the rails?  I know Eleventh Doctor Matt Smith is more goofy than the borderline-nihilistic David Tennant, but somehow...this...is not amusing.  ﻿Even worse, Smith is...horror of horrors...beginning to annoy me.   Yet even that is not what I think is at the core of the problem with this latest series/season of the Adventures of the Time Lord.  The BIG problem is that Doctor Who is no longer about Doctor Who even if the entire series/season involves the name of Doctor Who himself.  Isn't that ironic, don't you think...
As evidence, I give you this:

When I was a little girl, I had an imaginary friend.  And when I grew up, he came back.  He's called the Doctor.  He comes from somewhere else.  He's got a box called the TARDIS that's bigger on the inside and can travel anywhere in time and space.  I ran away with him, and we've been running ever since...(emphasis mine).

There it is in a nutshell what I consider the biggest flaw in the NuWho.  As Ellery Queen would say, "Did you get that?"
If you didn't, allow me to spell it out.  The big problem is the decision to have an introductory opening where Amy tells us about her 'mysterious friend'.  I'd argue that it's a mistake to have a cold opening in the first place, but more on that a bit later.
Imagine, if you will, that you'd never seen an episode of Doctor Who, neither the classic or revived series.  You even managed to skip Series/Season Five, so your first encounter with the series is Day of the Moon Parts 1 & 2 (The Impossible Astronaut/Day of the Moon).  Right from the get-go, if we went just by the intro, we get the idea that Doctor Who isn't about the Doctor at all...it's about the Companion, in this case, All About Amy.  It makes Doctor Who the series into something Companion-centered, not Doctor-centered.  For the new viewer, it would make things confusing (this show is about Amy, right?).  For long-time viewers, we already know all this, so why are we told over and over about when Amy met the Doctor for the first time?  Moreover, neither in the classic series or for five series/seasons did we need this little intro about Amy and her encounter with her 'mysterious friend', so why start now?
I am at a loss to understand the thinking behind this decision.  If you're a long-time viewer (especially before Rose), you know all this.  If you're not and are just starting out, all the "I"s indicate that the series is more about Amy's journeys with her 'mysterious friend' than they are about him.
Perhaps this is how Steven Moffat wants the show to go.  When I kept watching this episode after episode, I kept thinking, 'why are we getting this information?'  Moreover, I kept wondering why we were going into the Doctor's adventures from AMY'S point of view.  Would we do this for every future Companion?
For all the faults Doctor Who may have, at least we knew that the stories would center around the Doctor.   In the beginning, we did get a bit of the background information of the Companions when they came in, but once inside the TARDIS is was Companion and Doctor, period.  Once the revived series began, we got more about the Companion's lives than we have before.  That in and of itself isn't all that bad.  However, now we've gotten to the point where we are being led to think Doctor Who is not about the Doctor, but about the Companion.
I would remind Mr. Moffat et. al. that the show is not called Amy Pond, or even River Song (although Moffat is damn well determined to make it all revolve around his Galatea).  It is STILL called Doctor Who.
This bizarre plan to make Doctor Who appear centered around the Companions, however, is only the tip of the iceberg.  Allow me a few more thoughts. 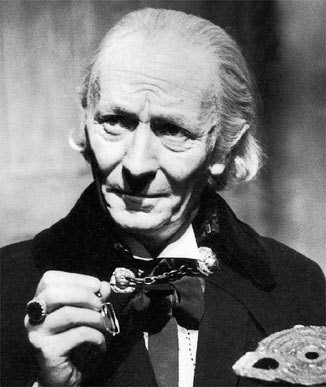 In the nearly fifty-year span that I am making an effort to cover, I have completed only three full Doctor retrospectives: the First, the Ninth, and the Eleventh.  In that time we can say that there have been some good and some bad Doctor Who stories.  Take for example this gentleman, William Hartnell as The First Doctor. The First Doctor has had 20 stories, both complete and missing, released on DVD.  In that time, he had two stories that won a perfect 10/10: The Aztecs and The Time Meddler.  Three other stories: Inside the Spaceship, The Dalek Invasion of Earth, and The Romans, all scored a very respectable 9/10.  Granted the good Doctor had his share of clunkers (no one ever bats .1000), and two of his stories: The Gunfighters and The Web Planet, earned the overall low score of 2/10. This is the Ninth Doctor.  He is the shortest Doctor, not in terms of height but in terms of stories, lasting only one season/series.  Even with only ten stories (I count two-episode stories as one, hence my count), he still managed to hit a few home runs.  Both The Unquiet Dead and Father's Day won a perfect score from me, with The End of the World at a good nine of ten.  However, he did get two lousy stories: Boom Town and The Long Game getting him the lowest Ninth Doctor score of four.  It is hard to say how good or bad future Ninth Doctor stories would have been, but on the whole, his tenure was successful, with more hits than misses. 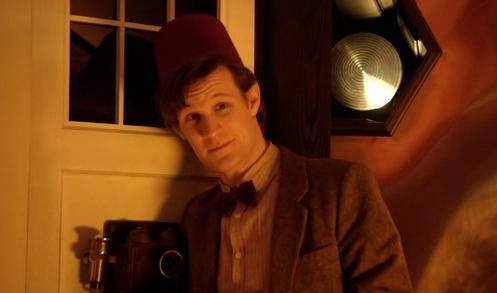