Doctor Who Story 038: The Abominable Snowmen 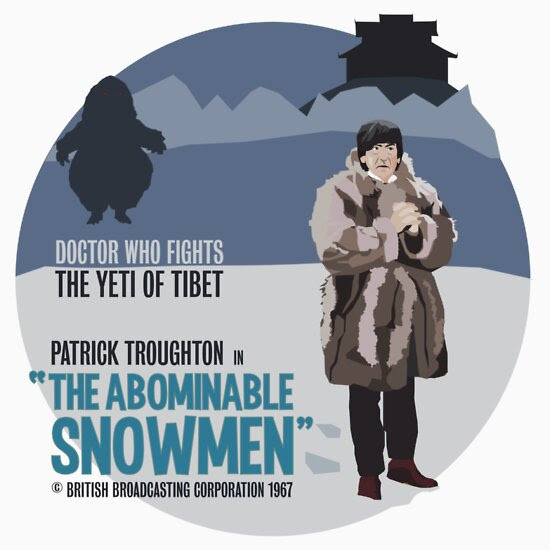 Curiously, The Abominable Snowmen at times appears to both take things extremely seriously and not take things seriously at all.  On the one hand, you have a great deal of Buddhist mysticism wrapped up in a science-fiction show, with rather esoteric things as astrol planes and hidden mystics.  On the other hand, the title characters are not really monstrous-looking, but almost cuddly.  Granted, they can appear at times quite menacing when up close, but when we see them march up and down in unison, they end up looking rather cute.  There are some wonderful things in The Abominable Snowmen (in particular the art direction), and the one episode remaining has an intriguing set-up.  However, here is another case of whether six episodes were necessary to tell this story.

As close to a wrap-up as one can give considering only Episode 2 out of six survives, we have this.  The Doctor (Patrick Troughton) and his Companions Jamie (Frazer Hines) and Victoria (Deborah Watling) have arrived in Tibet, where the Doctor expects a warm greeting from the monks at the nearby Buddhist monastery, in particular because he is bringing back an ancient holy relic that he has kept for safekeeping (exactly safekeeping for what, I'm not sure).  Instead, the monks believe they are responsible for making the Yeti (or Abominable Snowmen) into aggressive beings rather than the shy monsters they normally are. 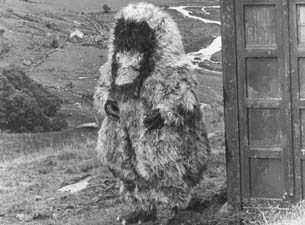 There's evil at work, and the monks, along with Professor Henry Travers (Jack Watling) believe the trio are a danger.  Eventually, we learn that the Yeti we've been seeing are not the same Yeti we all know and love.  Rather, they are actually robots being controlled by who and why.  Things get even weirder when the Doctor learns that Padmasambhava, the old monk whom he was friends with is still very much alive despite it being a good two to three hundred years since last he visited.

Padmasambhava, along with the Yeti, are being controlled by an entity called The Great Intelligence, an alien which wants a living form to conquer the universes.  The Doctor manages to defeat the Great Intelligence by destroying the spheres that control the various Yeti, and his very old friend is finally able to die at last.  With the Ghanta returned and the Yeti/Great Intelligence defeated, the Doctor and his Companions leave.

As I stated earlier, The Abominable Snowmen has some beautiful art direction which captures the beauty of Buddhist art as well as making the sets look like an ancient monastery deep within the Tibetan mountains.  In the surviving episode, we can see the great care that was taken to make such an exotic locale believable, even beautiful.  The inner sanctum where Padmasambhava resides is spectacularly captured (as are some of the costumes ranging from the Doctor's fur coat to the monk's robes).

It's unfortunate that writers Mervin Haisman and Henry Lincoln didn't take the same care with the actual story.  Don't get me wrong: there are some brilliant ideas in The Abominable Snowmen (such as the shifting of Padmasambhava's voice from benevolent and sweet to malevolent and angry when speaking of the Doctor), and good moments of humor (as when the Doctor warns Victoria away from Jamie because "he has an idea").  My issue with The Abominable Snowmen is that it is built on things that don't quite hold together if one is not Buddhist.

For example, the Great Intelligence is able to capture Padmasambhava when the latter is travelling in an astral plane.  I'm not against Buddhists or their beliefs, but I don't accept people can travel outside their bodies only to be captured by evil entities.  It's almost like getting the plot for Insidious, which works in a horror film, not so much in science-fiction.  Further, after three hundred years tinkering with machines for his army, the best he could come up with are those cuddly little things?

The Ghanta, this object of mystery, appears to be a MacGuffin, that object that appears important but is really an excuse to get the ball rolling.  I think it would have been a good idea if the Ghanta were somehow highly important to the Great Intelligence and his plans, or even to Travers.

Finally, in what I consider a flaw to The Abominable Snowmen (besides the rather cuddly, roly-poly monsters...not unlike Craig Owens) is that six episodes simply appears too long to keep the mystery going.  Very rarely have I found such a long story to keep up interest.  There have been a few (mostly the Dalek stories) but whenever we face some sort of alien that asks us to continue for such a long period of time, we feel a certain drag.  I don't know whether The Abominable Snowmen would have kept my interest, but I am leaning towards "no".

Again, this isn't to say that director Garald Blake didn't have good things within it.  The performances were all quite good, from David Spenser's innocent and devout monk Thomni to Norman Jones' belligerent Krihsong.  I wasn't too thrilled with Jack Watling's Professor Travers, thinking he was a bit too tough and not a particularly bright scientist.  However, given that we have only one episode out of six I can't say whether it would have gotten better or worse.

On the whole, the surviving episode of The Abominable Snowmen creates a strong atmosphere and does leave you curious as to what happens next.  However, I don't know if the final payoff would have resulted in nirvana.

Next Story: The Ice Warriors