Doctor Who Story 040: The Enemy of the World 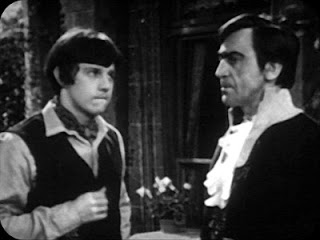 The Enemy of the World is a curious entry in the Doctor Who canon, certainly in the 2nd Doctor era.  This six-part story (of which only Episode 3 survives) doesn't have any alien monsters and doesn't have the Doctor or his Companions being attacked by outside forces.  Rather, it is all about political intrigue, and a chance to give Patrick Troughton a chance to show his extraordinary range as an actor.  This above everything else is what elevates The Enemy of the World, even in its incomplete status, as one Troughton's finest hours on Doctor Who.

The Doctor and his Companions, Jamie (Frazer Hines) and Victoria (Deborah Watling) have arrived on Earth, Australia to be exact.  There, they soon get swept up in the machinations of those attempting to stop Salamander (Troughton again) from taking over the world.  Salamander, to the world, is a benevolent figure: he has helped alleviate so much world famine he's been hailed as 'The Shopkeeper of the World'.  In truth, he is determined to rule the world.  Various world leaders who oppose Salamander have mysteriously died and been replaced by Salamander loyalists.

The Doctor is recruited, somewhat unwillingly, to impersonate Salamander to help expose him.  The chief architect of this plan is Giles Kent (Bill Kerr), who has survived to oppose Salamander but now is disgraced and exiled.  Eventually, we learn that the reason Salamander has come to the rescue in ecological crises is because he caused said ecological crises (a bit of a Munchhausen Syndrome), and he is defeated.

David Whitaker's script is curiously one of the few six-part stories that, given the plot, could actually hold up over such a large story.  This is primarily because the story involves all those political twists and turns that make for great drama.  On the whole, I think The Enemy of the World might have lagged by Episode Five but given that other six-part stories past and future would definitely feel sluggish it is actually a positive turn.

In the surviving episode, Barry Letts' direction kept things moving quickly but not overwhelming the audience.  We not only have the menace and danger with schemes to assassinate high-ranking officials like Denes (George Pravda), Kent's last remaining ally in power or the actual killing of the weak-willed Salamander stooge Fedorin (David Nettheim), but also allows for moments of comedy.  The laughs come from the gruff Griffin the Chef (Reg Lye), who seems resigned to not have his cooking ever appreciated or having anyone (especially the inept Victoria) ever turning out a good meal.

In Episode Three, we have not only good acting and action, but a line so beautiful and brilliant that it might as well be the Doctor's philosophy of life and the foolishness of war.  In Kent's trailer just outside the border, two thugs ransack the place in part due to the search for Salamander's doppelganger.  The Doctor looks around in sadness at the results of their actions.


People spend all their time making nice things and other people come along and break them.

I don't think few other lines so brilliantly capture the Doctor's worldview.  Moreover, as an alien being himself we can see how an outside view of how humans can be so destructive is instructive as to how truth can be presented.   The Doctor speaks the truth: great energy is spent in creating things of beauty, and in a brief moment others with nefarious motives can come along to destroy them. 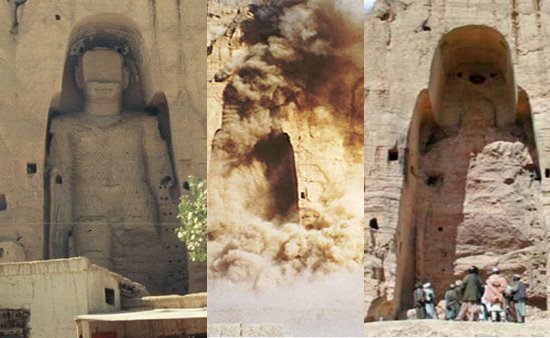 There are the Buddhas of Bamiyan in Afghanistan.  They were created from the mountains and seen as a beautiful expression of faith, created over months if not years straight from the rocks.  In comes the Taliban, and in seconds the Buddhas were gone (although they are being reconstructed).

Then there is the fabled Amber Room.  The gold-laden salon of the Catherine Palace near St. Petersburg, Russia disappeared during the chaos of the Second World War, never to be seen again.

History sadly is littered by people who have destroyed great buildings and artwork and literature, from Savonarola's Bonfire of the Vanities in medieval Florence to the Nazi book-burning.  The Doctor was so right...people spend all their time making nice things and other people come along and break them.

Here is where The Enemy of the World really excels.  It is in Troughton's dual performances of Salamander and the Doctor.  In the only surviving episode, when we see Troughton, we can easily forget that it is the same actor.  Troughton's inflection and body movements as the Doctor is so different from his turn as Salamander that it becomes a master class in acting.

Granted, I understand Salamander is suppose to be Mexican, and as someone of Mexican descent I never got the impression he was Hispanic, not even with the make-up work.  Truth be told, it was never an issue.  I figured given his accent he was vaguely European, I figured Spaniard or even Hungarian, but never Latin.  One might have a better idea if other episodes are ever discovered, but on the whole I didn't think anything of it.

In short, Troughton gives the best performance he's ever given on Doctor Who, primarily because he is allowed to play evil, and he never overdoes it in the evil department.  He's never hammy or over-the-top, but quietly menacing.

The Enemy of the World is a strong story that sadly we don't have.  It looks interesting and has both a strong pace and even little bit of humor that lifts some of the heaviness of the plot.  I still can't get away from the Doctor's line in Episode Three.

There's more than poetry in his turn of phrase...