Doctor Who Story 050: The War Games 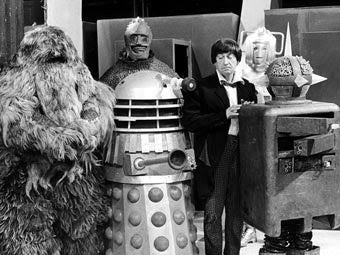 If it weren't for the fact that the twelve-part The Daleks' Master Plan has several episodes missing, The War Games would be the SECOND-longest Doctor Who story in existence, coming in at a whopping TEN episodes.  Since The War Games is complete, it means that this story is about four hours and fifteen minutes long if one were to watch it in its entirety from beginning to end.  Some epic films like Lawrence of Arabia and Ben-Hur aren't that long.  The War Games isn't just famous for being the longest surviving story in Doctor Who history.  It also is the first story to mention the Doctor's own people (The Time Lords), the last black-and-white Doctor Who story ever made and the farewell performance of Patrick Troughton as the Doctor himself.

The War Games is a massive tale, but it really isn't until Episode Eight that exhaustion finally sets in, which is to its credit.  Oftentimes some past (and future) Doctor Who stories would wear out their welcome long before the story ends, and The War Games doesn't escape the "maybe it's TOO long" problem that plagued the series until a four-part story became the norm for Classic Who.  Fortunately, writers Terrance Dicks and Malcolm Hulke managed to not make The War Games feel as padded out as it ultimately became, and did manage to overcome some problems not of their making.  The end result is a remarkably fast-paced, well-acted story that added new ingredients to the Doctor Who mythos that would be important in the stories to come.

The Doctor, along with his Companions Zoe (Wendy Padbury) and Jamie (Frazer Hines) find themselves in the trenches ofWorld War I.  Soon, they are taken prisoner by the British.  General Smythe (Noel Coleman) believes Jamie is a Scottish deserter and Zoe and the Doctor spies.  Lady Jane (Jane Sherwin) and Lieutenant Carstairs (David Savile) do not believe it.

However, strange things are going on.  Smythe is able to hypnotize everyone under him, and he is reporting via advanced technology to a mysterious group.  Furthermore, Lady Jane and Carstairs always get the sense that something is blocking their memory, and there is the case of a literal fog that has some power over everyone.

The Doctor and his Companions manage to escape, but then to their utter amazement find they have run straight into a Roman battalion, then to an American Civil War battle.  They soon discover that they are not in World War I.  In fact, we're not even on Earth.

We find out beings from another world have been kidnapping humans out of their own time to form a super-army.  The War Chief (Edward Brayshaw) has given them the power of time travel.  Reason being he is of the Doctor's own race, whom we discover are the Time Lords.  Some of the kidnapped warriors have discovered they are being used, and form a resistance that so far has been only a minor nuisance, but with the Doctor's help they soon all link up, bringing the aliens, especially their leader the War Lord (Phillip Madoc) to the brink of being defeated.

After ten episodes the War Chief is defeated (killed by the very aliens he had been aiding) but victory for the Doctor comes at a high price.  All this time the Doctor had been basically avoiding detection from the Time Lords, but because he could not take all the abducted back to their own time he needed to call upon the Time Lords for help.   Now that he's been found at last, the Time Lords do manage to return everyone to their right place, but because he has interfered with matters on other worlds (the equivalent to Star Trek's Prime Directive), he is to be punished.  His two Companions are returned to their own time, remembering nothing of their adventures with the Doctor save their first (even Time Lords can't erase all history) and the Doctor himself will be both exiled to 20th Century Earth and be forced to change his appearance. 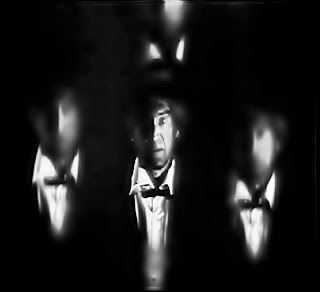 The War Games is an epic in terms of its length, but the great success of The War Games as a story that holds together goes primarily to its two writers: Terrance Dicks and Malcolm Hulke.  Originally a six-part story, the story following it for some reason was not made.  The orders came from above: make it now ten episodes long.  That Dicks and Hulke managed (for the most part) to make the added War Games episodes seem to be part of the story is a credit to their collaboration and talent.

I say 'for the most part' because it is only when we get to Episode Eight that not only do we get a sense of exhaustion (both in viewing and story-wise) but the introduction of a new character, one Arturo Villar (Michael Napier-Brown), a stereotypical Mexican bandido.  Throwing him into the mix just seems to be a way to add a new dimension to a story that is slowly running out.  I can largely overlook the cliched way Napier-Brown played Villar (not a lot of British people can play Mexicans convincingly, even when they lay on a 'Mexican' accent).  However, I am reminded of that old Cousin Oliver Syndrome: the adding of a cute kid to give a series new life.  While this isn't the same thing, it is in a similar vein: adding a new character to give a story new life.  That was a flaw.

Another flaw is in the entire idea that the War Lord, not the War Chief, was the real brains of the operation.   As good as Dicks and Hulke were in crafting the story, I can't get the notion that again, we had a lost opportunity with the antagonist.  The main conflict was always between the War Chief and the Security Chief (James Bree), with the War Lord playing only a minimal role in the hijinks.

However, some parts of The War Games are quite effective, even chilling.  In particular the end of the story; the Doctor has lost his two Companions, who sadly will barely remember him or all their adventures.  He then is forced to 'change his appearance' (the term 'regeneration' having yet to be invented), and the final few moments, with a at turns defiant and frightened Doctor desperately trying to stop the changes as he slips further into the void, is downright chilling.

I also think that The War Games has a subliminal message about the foolishness of war, in particular how these 'masters of war' manipulate the troops.  I don't think it was a coincidence that the ones who communicated with the aliens were the Generals while their subordinates were almost completely unaware of how they were being used as cannon fodder to then be used to conquer the galaxy.  The heroes are 'the Resistance', those soldiers who are refusing to play these 'war games'. 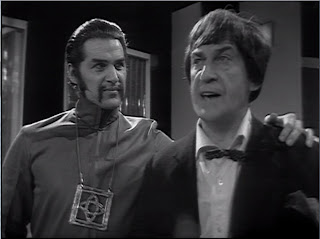 Leaving aside the political aspects of The War Games (which can be read into the story but which if existent are mercifully subtle and don't interfere with a good science-fiction concept), let's focus on some extraordinary bits within this massive story.  Chris Hayden's editing was seamless, especially in Episodes 2, 9, and 10 when we get thrilling and genuinely shocking twists: the World War I group rushes straight for a Roman legion! the Time Lords slow down time itself! the Doctor is sent into the void!  Complimenting Hayden is Dudley Simpson's score, which enhances the tension and twists in all these moments.

The performances from the guest stars are equally well-crafted.  In NuWho, Castairs would have been considered a Companion (one with a spin-off attached as all NuWho guest characters are inexplicably tagged with spin-off fever).  However, Savile gives Carstairs a full range, from the decent-chap style of British drama to that of a man fighting for his life and sanity.  Jane Sherwin's Lady Jane Buckingham is equally strong as the woman who does her best to outwit these aliens.  Truth be told, I don't know if we saw enough of her (especially after Arturo Villar popped into the picture) but given both the length of The War Games and the fact that women tend to be demoted it isn't a surprise she was left to 'nursing'.   While Bree's Security Chief was excellent in his clipped and haughty manner, I'd argue that Breyshaw's War Chief was a bit over-the-top (neither the Fu Manchu mustache or the Nehru jacket helped, by the way).  Despite this, David Maloney directed both his guest stars and the regular characters in a near-spotless way to where on screen they almost never lagged or looked as if they didn't belong.

Maloney put both the acting and technical elements together so well that one rarely notices that The War Games is extremely long.

Finally, I think that we did have a bit of a lost opportunity to expand on the Doctor Who world when we gave the Time Lords themselves only one episode.  Granted, it's later that we get all that Gallifreyan machination and conspiracies that we all love, but they did come across as these remarkably boring quasi-deities.  Anyone would have run away from them.

I can't say that The War Games is too long because through its four-hour running time it held my interest and managed to hold up under its massive weight.  Very few stories can last six episodes or more and stay interesting (almost all Dalek stories and perhaps The Invasion or The Seeds of Death, maybe The Ice Warriors being exceptions up to this point in Doctor Who's history).  While I can't say The War Games is too long I will say that it is a bit stretched out.  That's not a particularly bad thing: The War Games does hold your interest for most of the story but one wonders whether we had some lost opportunities by not delving into the Doctor's home world or putting more focus on the conflict between the War Chief and the Doctor.  Minor things, perhaps, but still things to consider.

Still, on the whole The War Games is an intelligent and clever story with great twists and shows that a long story can work, even if at times it veers close to breaking.

Next Story: Spearhead From Space
Posted by Rick at 11:42 PM