Doctor Who Story 049: The Space Pirates

There is something almost perverse in that the only surviving episode of The Space Pirates exists in two places. One is a 35mm film print, which was preserved only because it was the first BBC program ever placed on film (which explains why said episode, Episode 2, is the only one surviving).  Then there is a rare instance of a video recorder being used on The Space Pirates.  Would you believe it...it is the EXACT same episode!  That means out of the six episode story, only Episode 2 remains for us to enjoy.  Enjoy, however, may be too grand a term for it, because even in that one episode, The Space Pirates looks like a slow and dull adventure made slower and duller by its length.

The Space Pirates lives up to its billing: it's about pirates in space.  That in itself is a bright idea, and Robert Holmes, in his second Doctor Who screenplay, at least presents the notion as instructed.  However, The Space Pirates is more a 'Western in Space' than a pirate story, complete with crazed prospector.  These touches, along with others, sinks The Space Pirates to mediocrity.

The TARDIS materialises in Earth's future on a space beacon just before it is attacked by pirates. The Doctor (Patrick Troughton) and his Companions, Jamie (Frazer Hines) and Zoe (Wendy Padbury) find themselves trapped in a sealed section of the beacon. It is blown apart and flown to where the pirates will plunder it of the precious mineral argonite. They witness a conflict between the pirates and the Interstellar Space Corps, led by General Hermack (Jay Mack) and Major Warne (Donald Gee).

The ISC are convinced that the pirates' mastermind is an innocent yet eccentric space mining pioneer named Milo Clancey (Gordon Gostelow), while their true leader is a man named Caven (Dudley Foster). Caven has a secret base on the planet Ta. He is assisted by Madeleine Issigri (Lisa Daniely), daughter of Clancey's ex-partner Dom, who - unknown to her - is now his captive.

When Madeleine discovers Caven's full treachery she helps to bring him to justice. The time travellers are given a lift back to the TARDIS by Clancey in his rickety old ship, the LIZ 79. * 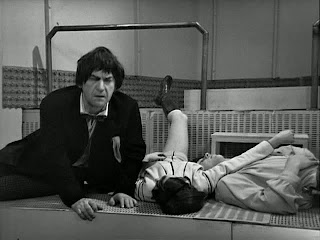 Even in the surviving Episode 2 we see what makes The Space Pirates a weak Doctor Who story.  Namely, the Doctor and his Companions are basically irrelevant to the story.  Minus the Doctor's efforts to bring the broken-off section of the spaceship closer to the piece where the TARDIS is (which given the length of the story, he obviously was going to get wrong) they played no part in the episode itself.  In fact, if you cut their scenes, you would have had a whole new story that might have worked as a separate series.

The NuWho fans are fond of demanding spin-offs for every Tom, Dick, and River that appears as a guest star/character  (getting their wish with the Captain Jack Harkness spin-off Torchwood).  The Space Pirates gives us a roundabout vision of what a potential Doctor Who spin-off might have looked like.  For all the length of The Space Pirates, one could easily have written the travellers out of the story without being part of anything.

Granted, it's pretty difficult to make that argument without being able to see the other episodes, but the synopsis is pretty Doctor-lite.   I'd argue that if you removed the main characters you don't affect the overall flow of the story.  That being the case, it makes it hard to imagine that a story where the Doctor is almost irrelevant would be a good to great Doctor Who story.

Even that perhaps could be forgiven (although intensely difficult to do so).  The Space Pirates unfortunately suffers from other factors.  The decision by director Michael Hart to ask his characters to appear as if they were in a Western (particularly with Gostelow's "hillbilly in space" Milo, which makes him look a pickax and dance short of Walter Huston in Treasure of the Sierra Madre) turns this almost into farce.  Another space crew member, Technician Penn (George Layton), was allowed to have shaggy hair and a mustache that made him look like a lost Beatle.

One poor decision was in the costumes, which in terms are grand and almost comical (the space helmets themselves being a source of unintended laughter).  Dudley Simpson's score was on the plus ambitious, but curiously the vocalization that opens each episode of The Space Pirates makes it sound far too grand for the story its telling.  One thing that is in retrospect amusing is that The Space Pirates with that vocalization predated Murray Gold's NuWho score which similarly echoes a female vocal in space.

One final note: Robert Holmes' script makes mention of a 'mind probe', and I have no way of knowing whether Terrance Dicks subconsciously drew from The Space Pirates or Holmes himself when he turned 'the mind probe' in The Five Doctors into one of the most famous (or infamous) lines in Who history...but we'll cross that bridge when we get there.

One complaint I continuously make is that with the possible exception of Dalek stories, long Doctor Who stories (those that are longer than four episodes) simply can't maintain the stamina or interest of an audience.  The Space Pirates at six episodes appears to be another case of the story being far too long for the tale that it's telling.  Even if it were to be rediscovered I doubt The Space Pirates would be all that popular.  Still, it would be nice to have more lost episodes found, even if it were something as weak as The Space Pirates.

* My thanks to TARDIS Wikia for the plot synopsis.

Next story: The War Games
Posted by Rick at 8:32 AM