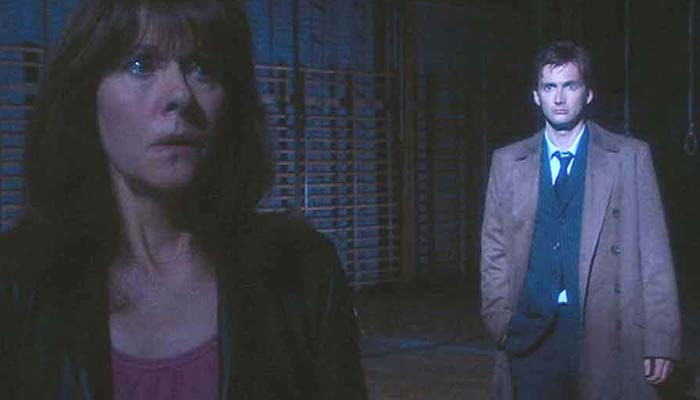 School Reunion is the first time NuWho has acknowledged it had a long backstory before Rose, and it does so by bringing in the Gold Standard of Classic Who Companions.  It's a curious thing that the first time I saw School Reunion (at its premiere), I was thoroughly enchanted, but after a second viewing, I can't keep up the enthusiasm for it I had when first I saw it.  While School Reunion is a great acknowledgment of the promise and perils of being the Doctor's Companion, and while it also is a great story for kids that tap into all the fears and fantasies they have, in this case perhaps making things a little less obvious might have worked wonders.

The Doctor (David Tennant) is working undercover as a physics teacher while Rose Tyler (Billie Piper) is a cafeteria lady in a school where strange things are going on.  They were first alerted to this by Rose's bumbling boyfriend, Mickey Smith (Noel Clarke), who figured that UFOs around the school area and new math teachers along with a jump in student's intelligence was suspicious (hacking into the Torchwood Institute files  helps).  The new headmaster, Mr. Finch (Anthony Head) is quickly established as a monster, but exactly what kind is a little bit mysterious.

Still, one can't argue with success.  The school scores have jumped, and the Doctor/Rose/Mickey trifecta have traced it to the chips (or fries to us Americans), that most of the kids eat.  This increase in student scores attracts the attention of the press.  Enter investigative journalist Sarah Jane Smith (Elisabeth Sladen).  The physics teacher known as John Smith barely contains his glee at Miss Smith's appearance, but she isn't interested...until she comes across a big blue police box while entering the school at night.  Instantly she realizes that the Doctor is here, and Sarah Jane and Doctor Number 10 reunite.

Still, no time for gentle moments: there's a mystery to solve.  There is also, as Mickey puts it, "every man's nightmare: the Mrs. and the Ex".  It is immediately clear that Rose dislikes, neigh, detests Sarah Jane, seeing herself as The Doctor's first...The Doctor doesn't seem too involved with Rose's jealous streak, telling her that "I live.  Everyone else dies," explaining why he cannot maintain Companions for long.  He has a lighter moment when he finds K-9, the old robot dog that he gave to Sarah Jane in the only Doctor Who pre-Rose spinoff K-9 & Company.  K-9, once fixed, finds that the oil used in the chips is from the Krillitanes, a species that conquers worlds and takes elements from the various creatures they conquer to their own.

In the end, the only boy who never eats the chips due to health issues, one Kenny (Joe Pickley) helps the Doctor and Companions Past & Present blow up the school, though it causes K-9 to sacrifice himself.  The Doctor does something he has not done with Sarah Jane before...say good-bye.  However, he also says hello to Mickey as a full-fledged Companion.  He asks to travel with the Doctor, and while Sarah Jane encourages the Doctor to take him on (he always needs a Smith around, she tells the Time Lord), Rose sounds less than thrilled.

Finally, the Doctor leaves, but he leaves a surprise: a new K-9, with whom Sarah Jane can travel to new adventures of her own...

There were and are still many things to admire in School Reunion.  First is the most important fact: School Reunion ties NuWho (for better or worse) with Classic Who.  Toby Whithouse's script firmly establishes that the Doctor Sarah Jane worked alongside with (Jon Pertwee's Third and Tom Baker's Fourth...not counting One, Two, and Five from The Five Doctors) has been regenerated into David Tennant's Tenth (Ten for Tennant...whatever are the odds).  He immediately recognizes her, she immediately recognizes the TARDIS, and he comments how he's regenerated a half-dozen times since last they saw each other.

I also thought Whithouse's script worked well if one thought this Doctor Who story was geared more towards children.  School Reunion taps into all those curious fears kids have about their teachers being monsters.  It also has some wonderful moments of dialogue.  At one point Finch tempts the Doctor (like Satan tempting Jesus after His forty days in the desert) by telling him that by helping him break the Skasas Paradigm he could bring back all those who've died.  Sarah Jane is also vaguely tempted by Finch's suggestion that she can be young forever, never grow old or die, always be with the Doctor.  While the Doctor appears to be softening to this line of reasoning, it is Sarah Jane who sets him straight.

"Pain and loss, they define us as much as happiness or love.  Everything has its time and everything ends," she tells them.  With that, the Doctor immediately destroys the mass computer and begins his final take-down of the Krillitane.

Whithouse also comes close to vulgarity.  As K-9 starts shooting lasers at the Krillitanes, Finch (who opts to remain human), tells them, "Forget the shooty dog thing," which I found shockingly risque for a children's/family show.  Whether this taps into Classic Who fans who are divided over K-9 (I fall in the "Love" side of the "Love/Hate" debate) I cannot say.  I like to think Whithouse was having a bit of fun with K-9's divisive mark on the fanbase. 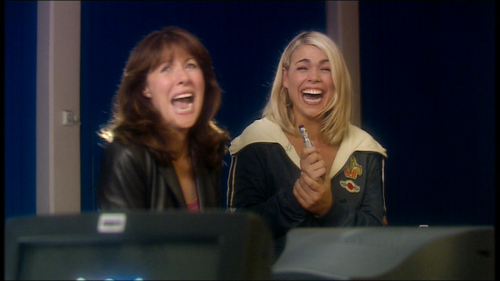 As a digression, I wonder whether the rivalry between Rose and Sarah Jane was prescient over the fierce feud within the Whovian community as to whether the Classic or NuWho is A.) better and/or B.) connected to the other.  The one-upsmanship between Sarah Jane and Rose as to who was more important was slightly amusing.  I say slightly because while watching this interplay between Piper and Sladen, two thoughts occurred to me.

The first is that Rose's reaction was highly irregular to both her character and to Companions in general.  I note the few times Companions crossed paths: The Five Doctors and The Two Doctors (The Three Doctors featured no Companions from The First or Second Doctors Era).  In both stories the various Companions got on quite well and were cooperative.  Here, Rose's instant jealousy marks a negative turning point to Rose's character.  In short, she is a bitch.  Sarah Jane was perfectly civil, friendly, even generous to the Doctor's newest Companion, while Rose's hostility was apparent immediately.  Further insulting Sarah Jane by stating that "rationing had just ended when she met the Doctor" was also just cheap.  I couldn't believe that someone who up to now had been rather generous to all beings could turn around and become so selfish and cruel.  Rose showed kindness to a DALEK for Heaven's sake!  How could the same person who showed compassion to the monstrous killing machine suddenly turn around and be so dismissive of someone who hadn't shown her any hostility whatsoever?

Rose in short, came across as a horrid little girl, the jealous girlfriend when up to now she had been just a nice working-class girl.  It also suggests that she has fallen in love with the Doctor (setting up a situation that is sadly being replayed over and over in NuWho, with future Companions Martha Jones, River Song, and Amy Pond all suffering from a Doctor-fixation, with only Donna Noble escaping this "I want to sleep with the Doctor" business).  Her reaction to Mickey joining only seals the deal, and we now wonder whether Rose should continue to rank high among Companions given her growing obsession with having the Doctor all to herself (and incidentally, stringing Mickey along).

The second thought, more insidious, is that Whithouse and director James Hawes are resorting to a rather backward view of women as possessive, jealous, and petty (especially when it comes over a man).  I realize there being a desire to have some sort of tension between characters to build up conflict, but I wonder in retrospect whether it was good to have them basically fight over a man.  The conflict could have come from approaches to solving the issue, but instead it devolved into a The Boy is Mine scenario that was only missing Brandy & Monica singing in the background.  This made both Sarah Jane and Rose look rather foolish and neurotic women (which I would argue is not within either character).

However, there are as I said things to admire.  I found Head's performance excellent: he knows how to project menace without being over-the-top.  It is also wonderful having Sladen come back, and she is clearly stepping right into character as a Companion who doesn't scream every few minutes.

There are also great themes being tackled: the idea that the Doctor eventually abandons or is abandoned by his Companions, the cost of loss, the reunion of the Doctor and Sarah Jane.  All wonderful things to see.  It's unfortunate, however, that the moments between the Doctor and Sarah Jane are undercut by either Rose or Finch and their actions.  It also is bad to see Mickey again reduced to this imbecile.  He can hack into top secret websites but can't figure out K-9?

Again and again I wondered why the reveal of Sarah Jane was made so obvious.  It would have worked wonders to see Sarah Jane just appear before the Doctor rather than see that she was about to come investigate all the goings-on at the school.  I wondered whether NuWho fans who have no idea about Classic Who would even understand who Sarah Jane or K-9 were.  There was never any attempt to explain her importance to Rose (or NuWho fans by extension) and while I knew what was going on I figured that anyone who started watching Doctor Who from Rose onwards would be confused as to who this woman and the tin dog were.   Her appearance would (and probably did) confuse people who like Rose Tyler, never figured the Doctor travelled with anyone else.  These NuWho fans pay lip service to Doctor Who's long history, but if they were honest they'd tell you they flat-out don't care about anything that happened between An Unearthly Child to Survival (or Doctor Who: The Movie aka The Enemy Within depending on who you ask).  That being the case, Sarah Jane Smith's importance to Doctor Who is only relevant in terms of what she does with David Tennant and future Doctors, not what she did with any Doctor prior to Christopher Eccleston.

That basically means that School Reunion would be touching to Classic Who fans, but NuWho fans would be less impressed to not impressed at all, and thus one loses some points for the reuniting of two icons from this legendary series.

At first, I was so enchanted by Sarah Jane Smith's return to Doctor Who that I was convinced that School Reunion would rank among the Greatest Who Episodes of All Time.  I still have great fondness for it, and think seeing The Best Companion of All Time is wonderful.  However, after a second viewing I've lost some of that lovin' feeling for School Reunion.  There are good moments, even great ones (what child at some point hasn't fantasized about seeing their school go kablooey), but in this case, School Reunion lost a little the second time round.

Next Story: The Girl in the Fireplace
Posted by Rick at 7:25 PM