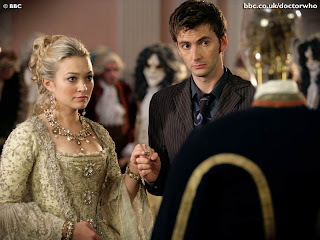 STORY 175: THE GIRL IN THE FIREPLACE

It is only with the benefit of hindsight that I see that with The Girl in the Fireplace, Steven Moffat would eventually plagiarize...himself!  Now, before we get to that, I feel it best to state openly that it has been several years since I last saw GIF.  In fact, I hadn't seen it since its premiere (as with most of Season Two), and at the time I thought it good but not as great as other critics proclaimed it to be.  Certainly having The Doctor (David Tennant) be a major part of the life of a historic figure is nothing new, and even the setting of France isn't new (two First Doctor stories, The Reign of Terror and The Massacre of St. Bartholomew's Eve aka The Massacre are also Franco-centric with the former being within the same century as the events in GIF).

I am trying to keep my growing anger at Steven Moffat (who wrote Girl in the Fireplace) from clouding my view of the episode.  I was successful up to a point: while Girl in the Fireplace has some good ideas rattling around it, in a strange variation of timey-wimey spacey-wasey I found myself constantly referring to an episode from the future because I found a surprising number of similarities between GIF and another story (but much more on that later).

There is an attack at Versailles, with robotic beings running wild.  A beautiful young woman runs to a fireplace and calls for The Doctor.  Meanwhile, The Doctor and his Companions, Rose Tyler (Billie Piper) and her quasi-boyfriend Mickey Smith (Noel Clarke) have arrived on an apparently empty spaceship.   The spaceship appears to be functioning despite a total lack of a crew.  Among the things they find is a chamber which is 18th Century French, which is rather curious.  The Doctor takes a peek and finds it looks straight into a bedchamber, where a little girl named Reinette (Jessica Adkins) is surprised to see a man in her fireplace.  She's more surprised when with a turn of a secret knob he spins into her bedroom, and triply surprised to find there is a monsters in her room.  It make a ticking sound, and the monster looks like a clockwork man in period costume and a mask, but it does not attack her, stating she is not ready.

The Companions, meanwhile, search the ship and find strange things within: a camera that is a literal eye, and a human heart pumping the machinery.  Meanwhile, the Doctor keeps popping in and out of Reinette's time, next seeing her as a young woman (Sophia Myles).  It is now he discovers that she is none other than Madame De Pompadour.  Instantly she realizes her 'imaginery friend' is not that at all, and he appears smitten with our Gallic Gal.  The Clockwork figures still menace both her and Rose & Mickey, at one point capturing them and threatening to make them a literal part of the ship.  The Doctor comes into all this, obviously after having a bit of a bender at Versailles (and having invented the banana daiquiri a few centuries early).

﻿
The mystery as to why the Clockwork Men have been pursuing Madame De Pompadour is still unsolved, but Rose (who again has taken a dislike towards the French royal courtesan) has been sent to warn Madame that in five years her time (a few seconds or minutes their) the Clockwork Men will be ready to take her head.

Now comes the time, and Madame De Pompadour, having been taken prisoner by the Clockwork Men along with His Majesty King Louis XV (Ben Turner) is ready to face her fate.  Just then, The Doctor bursts through a mirror along with Arthur, a horse that has been wandering the spaceship after inadvertently wandering into it from the gardens of Versailles.  He manages to defeat the Clockwork Men but he knows there is no way for him to return to his Companions.

However, a great fortune befalls the Doctor: Reinette had her childhood fireplace brought to Versailles.  Unbeknown to her, she had brought a portal to the spaceship which allows him to return.  He asks Reinette if she'd like to go with him to touch the stars, and she eagerly agrees, rushing off to pack.  When he returns, he finds a despondent Sun King, who is seeing her coffin being ridden out of Versailles.  The Doctor receives a note from her, stating that she has been waiting for him but fears he never will.  The Doctor goes back to the spaceship, never knowing the real reason why the Clockwork Men pursued our Reinette...the now-abandoned ship was the S.S. Madame De Pompadour.

As I've stated, this was the first time I had seen The Girl in the Fireplace since it was first broadcast.  I have found that a good to great story is one loves watching over and over again.  Classic stories like The Aztecs, The Tomb of the Cybermen, and from NuWho The Unquiet Dead are still stories that I enjoy no matter how often I see them.  GIF won't rank there because despite the praise and awards it has earned,   it has too many things from Doctor Who stories past and future that end up playing a bit like a retread or remake-in-the-making.

Certainly Moffat has a great idea there: the idea of monsters of the future 'haunting' a figure from the past.  I, however, can't shake the feeling that the story could have been much better if an outside antagonist had been at the center of the attempts on Madame De Pompadour's life rather than a mere malfunction by the Clockwork Men.  What great fun we could have had with Rose & Mickey being caught up in the intrigue and decadence of the ancient regime.

However, there were things in GIF that I flat-out didn't care for.  The first was Myles' performance as Madame De Pompadour.  The real Madame was a woman of refinement, great intelligence and elegant charm, one who held great sway over the monarch.  As portrayed by Myles, she was a simpering, rather blank and vapid woman.  This De Pompadour never struck me as being a woman of elegance or powerful intellect.  Instead, she seems to just be waiting around to satisfy the King's passions or the Doctor's fascination.

The second is something that occurred to me while watching The Girl in the Fireplace.  It came early on whilst I was making my notes.  It was a simple, little thing, at first of no great importance.  However, once it got stuck in my head, I suddenly had an awakening...not of the Kate Chopin variety (I'd be thrilled), but instead of the "Madame Curie has discovered radium" variety (metaphorically speaking of course). 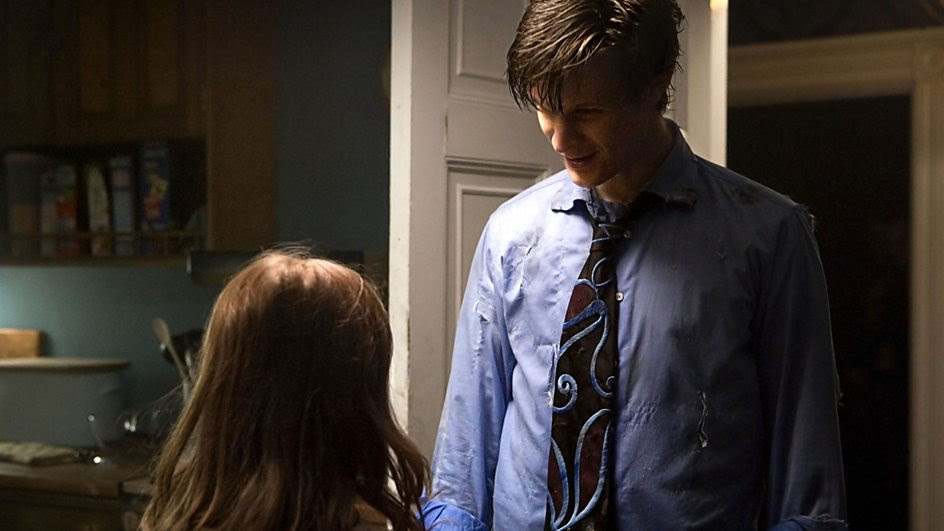 
Here we have about the only difference in story structure between The Girl in the Fireplace and The Eleventh Hour (starring The Girl Who Waited).  Moffat could not change history: De Pompadour died at 42, so having the Doctor come after her death solved the dilemma of having a well-known historical figure just disappear.  Amy Pond, however, is a different kettle of fish fingers and custard.

From The Eleventh Hour onwards, Amy Pond (who after her marriage became...Amy Pond, having apparently married a man who started out as Rory Williams but ended up as Rory Pond) was "the girl who waited", the little girl who grew up angry at her 'raggedy man' for leaving her waiting outside after promising to take her to the stars.  Her anger was a motivation in her time with the Doctor.  As far as we (and she) knew, the Doctor had left her waiting outside her house and she had never really gotten over it.

HOWEVER, we find that at the end of The Angels Take Manhattan, the Doctor had indeed returned to little Amy Pond that morning.  I'll grant that it's a beautiful moment (little Amy's face lighting up beautifully), but if he DID go back, then why would she have thought of him as A.) the Raggedy Man when Matt Smith's Doctor would have appeared perfectly dressed (rather than in David Tennant's rags), and B.) why would she harbor such resentment against her "Raggedy Man" when she would have known perfectly well that he would return in twelve years.

It's a storyline that ultimately makes no sense.  It is frustrating to see two seasons virtually wiped with one 'cute' scene.

I should also mention that we had Reinette at one point ask, "Doctor Who?", which appears to be a running gag with Moffat, using it as a source of comedy.  We also have Reinette's request that the Doctor 'dance' with her.  Curiously enough, the second part of the two-part The Empty Child (The Doctor Dances) was written by...Steven Moffat.

There are certain things to like about The Girl in the Fireplace.  The costumes were pretty.

As I kept watching though, I couldn't imagine Sophia Myles' interpretation of De Pompadour to be that of the clever, witty, brilliant courtesan.  Instead, she seemed to be a bit dim and more infatuated with The Doctor than with the Sun King.  The way out for the Doctor left much to chance.  One wonders what would have happened if Reinette's old home had burned down before she became the official mistress at Versailles, or if the movers had damaged something.  It was all a little too convenient.  Also curious to me was that, despite using human body parts to keep the spaceship going, the Clockwork Men seemed oddly hesitant to actually start tearing Rose and Mickey apart for spare parts.

Yes, it's a clever idea of having the Doctor pop in and out of a young woman's life (like we'll never see THAT again), but despite the praise I found The Girl in the Fireplace a bit cold and rather fast-moving, with a threat that never quite built up to the level it could have.  I still think it would have been better to have had the Doctor and Companions land straight into Versailles, where a much-amused Madame De Pompadour (and a slightly less-amused Louis XV) entertain the couple and save them from whatever menace is after them.