Radiating Success. Doctor Who Story 053: The Ambassadors of Death

STORY 053: THE AMBASSADORS OF DEATH

The Ambassadors of Death is another long story (seven episodes long) and one that has a twist on the 'invasion from outer space story' which Doctor Who was caught in now with The Doctor (Jon Pertwee) stranded on Earth and no way to leave on the TARDIS.  Again I think that at seven episodes it is a bit too long, which makes the wrap-up of the story even more strange given how quickly it went.  However, The Ambassadors of Death had a great deal of action and carried the plot remarkably well to make it another excellent addition to a very impressive debut season for Pertwee's Doctor.

Recovery 7 has been sent off from the British Space Programme to find out what happened to Mars Probe 7.  The latter ship was carrying two astronauts back from the red planet but nothing's been heard from them for seven months.  Astronaut Van Lyden (Rick Felgate), having reached Mars Probe 7, has locked the ships together, but then an ominous sound emanates from the ship, and Recovery 7 similarly goes off line.

The linking up of Mars Probe and Recovery 7 was being broadcast live, and among the viewers is The Doctor and his Companion Liz Shaw (Caroline John).  The Doctor isn't all that interested in the actual space travel (though the missing astronauts safety does concern him).  Rather, he's still tinkering with the TARDIS, still trying to get it to work even after the Time Lords disabled it after forcing his regeneration at the end of The War Games.   That sound alarms the Doctor.  He's heard it before and he fears for everyone.  He and Liz rush to the BSP, which has been under UNIT's protection.

Brigadier Lethbridge-Stewart (Nicholas Courtney) convinces Professor Ralph Cornish (Robert Allen) to use the Doctor's help.  At first Professor Cornish isn't eager for the Doctor's help but quickly sees his importance.  That sound the Doctor tells them is a message, with someone on Earth is sending replies.  Now the question is who and why.

After a battle at the warehouse where the messages were being sent we find that General Carrington (John Abineri), who had been on the Mars Probe 6 expedition, has been sending the messages.  There are more machinations in this tale: Dr. Taltalian (Robert Cawdron), part of the BSP, is involved in trying to cover up the goings-on regarding the missing astronauts.  The Recovery 7 does return, but in a strange twist there is an attempt to steal it, which is foiled by the Doctor.  However, once the capsule is forced open it is empty.

There were three figures inside, but they were taken by a group of common criminals.  These figures, presumed to be the missing astronauts, are a strange group.  They won't remove their space suits and require radiation levels that would kill people.  The criminals have Lennox (Cyril Shaps), a former colleague of Liz's to help with the radiation, and they soon take Liz herself to help them in this nefarious scheme. 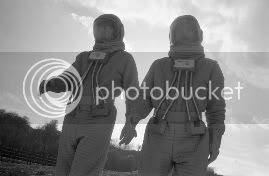 The astronauts also are able to kill just by touching someone.  The Doctor tells everyone that they are wrong in this respect: the figures in the spacesuits are NOT the missing astronauts.  Eventually the Doctor has to do something he had not done on the series: fly a spaceship to get to Mars and find out what has happened to the three astronauts.   He does find them, alive and well, but they believe they have returned to Earth and have been held in quarantine for a very long time.

The Doctor discovers the three spacemen are ambassadors who are being held prisoner by someone who fears them.  The Doctor promises to return the Ambassadors unharmed in exchange for the astronauts.  However, the Ambassadors are being used to provoke a war.  General Carrington has feared these creatures and will unveil them to the world, hoping that they inspire such panic that the world will have a 'preemptive strike'.  The Doctor and the rescued Liz arrive in time to stop him, and with Carrington arrested, and the promise is kept: the Ambassadors will be returned with the astronauts in exchange.

The Ambassadors of Death is the result of many hands working on it.  While sole writing credit went to David Whitaker, it was written by Trevor Ray, Malcolm Hulke, and script editor Terrance Dicks with Whitaker's story serving as a springboard.  Perhaps that is why it is both so long and a bit sprawling.  For example, the idea that Carrington is involved in all this is pretty clear from Episode One, but this plot thread is not really picked up until Episode Seven and rather rushed through.

However, despite the length and vastness of Ambassadors of Death holds together remarkably well.  The story provides great twists and excellent cliffhangers.  Each one of the endings is thrilling and filled with tension.  In fact, Ambassadors of Death plays less than a science-fiction story and more of a spy thriller, particularly in Episode Three when Liz is chased and captured.

As a viewer I never sensed that the story lagged or wore out its welcome.  Instead, it kept building on each episode and flowed extremely well.

What was incredible about Ambassadors of Death is that the special effects are on the whole quite advanced.  In particular are when the truck transporting the ambassadors changes appearance.  It's done so smoothly that one would think it was done today.  Sometimes the effects didn't work (whenever the Ambassadors struck down someone the big splotch that appeared was slightly comical).

Ambassadors of Death also had a great series of action pieces that makes it more thrilling.  Episode Two in particular had an extended action scene involving helicopters and aerial assaults that seem to be almost from a movie rather than a television series.  In Episode Three, when Liz is attempting to outrun the thugs sent out to capture or kill her (while wearing a very 60s outfit), we get quite a tense and exciting sequence.

Moreover, The Ambassadors of Death has a great intelligence to it.  In fact, it's almost prescient to how fear and paranoia of 'the other' leads people to do irrational acts.  Carrington isn't evil: his actions aren't motivated by hatred towards the aliens but by fear of them, especially since he saw a fellow astronaut killed by them (even if he refuses to accept that it was an accidental killing since the ambassadors didn't realize their touch was deadly to humans).  In short, the ethical questions Ambassadors of Death asks about whether Carrington's plan was evil is one that makes audiences think as well as keeping them entertained.

We should remember that General Carrington and Sir James Quinlan (Dallas Cavell) were not acting out of hatred towards them.  They truly believed the ambassadors were harbingers of doom and their actions were motivated by a sense of 'moral duty' as Carrington often stated.  They thought they were doing what was best for the planet, so they cannot really be called evil.  However, they were basically using the Ambassadors to start some war, so they were not good.

One of the highlights of Ambassadors of Death was Dudley Simpson's score and the cinematography.  Certain shots (such as when the Ambassadors appear to be coming out of the sunlight itself) are remarkably beautiful.  However, an oddity in the score was in Episode One: the music when Recovery 7 is linking up to Mars Prove 7 sounds almost oddly romantic. 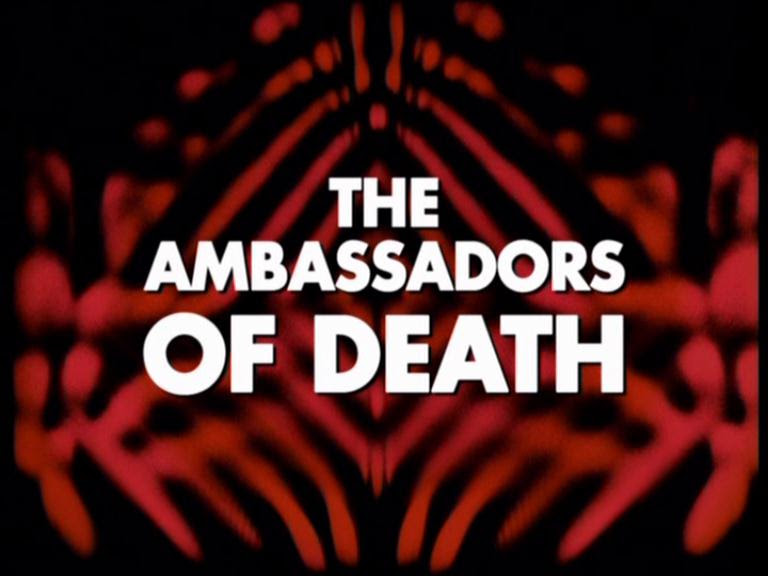 One thing that does make Ambassadors of Death slightly comical is the actual title cards.  It was great to play around with the title sequence, but seeing "The Ambassadors" appear, then "OF DEATH" not only be larger font but accompanied by slightly more dramatic music within the Doctor Who theme makes it almost comical.  Ambassadors of Death also has a slight disadvantage of keeping poor Liz Shaw in mini-skirts and an awfully large hat, as well as slightly pushing her off to the side.  Granted she is shown as being capable of understanding a lot of what the Doctor was doing (and doing some of it in French no less) but one wonders why she had to wear something almost skimpy to show she was a brilliant scientist.  Finally, the actual leader of these ambassadors was clearly the work of make-up artists working with a limited budget; while not awful, not the most convincing either.

Still, these really are quibbles to a story that while long flowed well and kept building a sense of excitement throughout its seven episodes.  We got great treats (at one point Pertwee's Doctor used one of the 'funny voices' Pertwee was known for), and a great performance by both Pertwee as the daring and dashing Doctor of action and Courtney as the loyal right-hand man Lethbridge-Stewart.  We even saw briefly John Levene go from Corporal to Sargent Benton.  The Ambassadors of Death had twist upon twist that keeps on riveted, and on the whole is a fantastic story in what appears to be the Dawn of A Golden Age for Doctor Who.

These Ambassadors will always receive a full welcome in any Doctor Who fan's home.

Next Story: Inferno
Posted by Rick at 1:20 PM