Television WILL Rot Your Brain 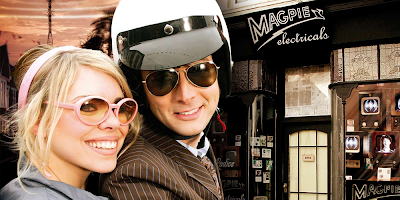 The Doctor (David Tennant) and his Companion Rose Tyler (Billie Piper) are all set to go see Elvis on The Ed Sullivan Show.  Being the Doctor, he gets the time and place wrong (making his pompadour hair all the more noticeable).  No need to worry: they've arrived in time to see the coronation of Her Majesty Queen Elizabeth II in 1953.  The desire to see the Coronation live has led to a run on the new television sets.  Magpie's Electronic Shop has an unbelievable offer: television sets for five pounds.  FIVE POUNDS!  It's a steal.

And of course it is, for Mr. Magpie (Ron Cook) is being forced to do something wicked by The Wire (Maureen Lipman), who will use the television to take over the world.  Having escaped execution by converting into electronic wavelengths, her plan is to capture enough people's minds to take on a physical form and thus continue her reign of terror.  It seems that whenever a person has been taken, their face disappears.  The only thing connecting them is a new television set, purchased at Magpie's...

In this Coronation Street-world is the Connolly family: brutish father Eddie (James Foreman), his long-suffering wife Rita (Debra Gillett), Grandmamma (Margaret Booth), and bright young man Tommy (Rory Jennings).   Tommy chafes under his father, and while Tommy trusts the Doctor and Rose, Eddie would rather keep family secrets just that.  Chief among them: the lost face of Grandmamma.

Still, she is discovered and Operation Market Stall sweeps her away to where others in similar situations are in.  The Doctor and Rose are determined to solve this mystery, which leads them back to Magpie's.  There, the Wire is discovered, but not before Rose herself has been converted.  Now the Doctor has a motive to bring this to an end.  Realizing that the Wire will use the Coronation's vast audience to wreak havoc, the Doctor with Magpie's help must now stop the broadcast...even if he must make people think he's The King of the Belgians.   He manages to defeat and capture The Wire on tape (which will never be played), and the long reign of Good Queen Bess can commence.

We learn that the informant of who has been ratting out The Faceless Ones is the evil Eddie.  Tommy stands up to him and Rita throws her bully husband out.  While the nation celebrates a Second Elizabethan Age a somewhat despondent Eddie begins to go.  The Doctor and Rose persuade Tommy to go to him, for after all, Eddie IS his father. 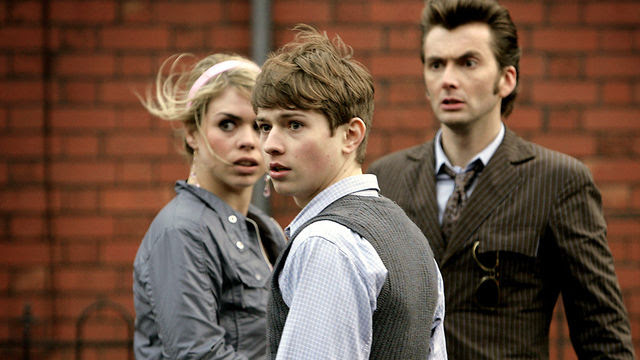 I do wonder whether writer Mark Gatiss was working out some of his personal issues with the Connolly subplot in The Idiot's Lantern.  The bright and eager son who has a verbally (perhaps physically) abusive father and terrorized father...could Tommy be a substitute for Marky?  Gattis was not alive at the time of the Coronation, and it is speculation on my part, but I figure there has to be a reason why we have a fixation on the domestic front when it feels like its the only thing that pushes the episode down.  It all smacks of second-rate soap opera material, and I wonder why we couldn't have a regular, even pleasant, family at the center brought to terror by having Grandmamma erased.

This subplot is just dull, and to be honest I felt Foreman's performance as the brutal Father Dursley (excuse me, Connolly) was so over-the-top it bordered on cartoonish.  Similarly Gillett's Rita was a stereotypical abused wife, though at least she had her moment where she stood up to her husband was well played.  Even Booth's Grandma was a bit clichéd.

Finally, I wasn't too thrilled that The Idiot's Lantern relegated Rose to not just a damsel-in-distress but also almost irrelevant.  By pushing her to the sidelines, especially after she put it together before the Doctor, it takes away from the point of Rose: the tough, bright girl who longs for adventures.  How much adventure can she have if she is rendered faceless and useless? 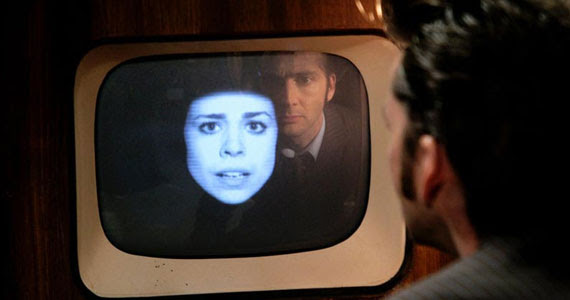 There were, however, other things that pushed up The Idiot's Lantern for me.  If one saw it as almost a spoof of television itself I thought it worked well.  While The Wire herself was not a particularly great villain, I thought Lipman's performance was quite good.   Jennings is also good as Tommy (much better than Gattis' material).  Tennant was excellent throughout the episode: from frivolous and fun (and yes, the hair was good too) to filled with anger and righteous fury (especially when attempting to rescue Rose, which as we know is what he does...rescue girls stuck in television sets).  Finally, the tension that builds when the Doctor races to save Britain from the Wire as she soon starts sucking the Coronation's audiences (intercut with actual Coronation footage) was well-handled.

On the whole The Idiot's Lantern was better than I remembered, but not as good as it could have been (especially the Connolly family issues taking up too much space).  Still, it is worth sitting comfortably for...