The Fire This And Next Time. Doctor Who Story 054: Inferno 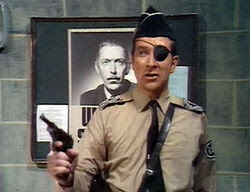 The Doctor (Jon Pertwee) has a terrible dilemma: he is stuck on Earth with no way out.  He is now in the unenviable position of having to wait for things to happen rather than take charge.  However, he is making the best of it, working as the 'scientific advisor' to the United Nations Intelligence Taskforce (aka UNIT) with his newest Companion, Dr. Liz Shaw (Caroline John) and under the protective (and at times, antagonistic) gaze of Brigadier Lethbridge-Stewart (Nicholas Courtney) who can be called something akin to the Doctor's friend.  So far things are going rather well, but what if everything the Doctor knew about those around him was thrown in disarray?  What if he found himself in a world both similar and unfamiliar, where those closest to him turned to be the most dangerous?

Inferno, the first Doctor Who story that dealt with paralle universes, is at seven episodes (or around three and a half-hours) a long story to which conclude Series/Season Seven, but it that time it is a breathless and wild run, filled with action, adventure, suspense, some astonishing acting, a thoughtful plot, and even a few moments of romance and comedy.

The Doctor is asked to come look at the Inferno Project, an effort to drill straight on through to the Earth's core, which in theory should provide vast supplies of cheap energy.  The project, overseen by UNIT, is headed up by Professor Stahlmann (Olaf Pooley) a cranky, short-tempered, cantankerous man who will bridge no dissent.  Over his objections, project director Sir Keith Gold (Christopher Benjamin) insists on bringing in Greg Sutton (Derek Newark), an oil rig expert.  Sutton warns against going in further, and while Stahlmann's assistant Petra Williams (Sheila Dunn) slowly sees his side the bad professor will not budge.

The Doctor is also interested in Inferno, or particularly the nuclear power it is using, as a way to get the TARDIS to dematerialize and allow him to overcome the time/space travel embargo the Time Lords have imposed on him since he was exiled to Earth at the end of The War Games.   The Doctor still gives out warnings as to the potential danger of the Inferno Project, but no one will listen.  However, the Doctor has problems of his own.  In a desire to regain control of the TARDIS, something has gone horribly wrong and he travels 'sideways' in time (as a side note, we see that Doctor Who beat Lost in the 'sideways' department by a good thirty years), forcing him to enter a parallel world where he meets people who are similar to those he knows but who are not like them either.

For example, the Brigade Leader Lethbridge-Stewart is a fascist ultra-militaristic figure who stamps out all opposition.  Section Leader Shaw, while still highly intelligent, is also a brute who believes might makes right.  The biggest change is that of Platoon Under Leader Benton.  On our world, Sergeant Benton (John Levene) is a very nice, sweet, almost innocent fellow who despite being in the military never seemed capable of harming anyone.  That isn't the case with the Platoon Under Leader, who is ruthless, uncaring, and extremely violent.

On this Earth, the Inferno project is much further along.  The Doctor desperately warns them of the danger, but again he is not only refused but seen with suspicion by everyone else except a growingly curious Liz. The parallel Stahlmann is determined to stop the parallel Sir Keith from interrupting the work.  Here, it involves getting Sir Keith extremely lost, but tragically is killed off screen.   Here, we do reach the Earth's core, and disaster strikes.  Reaching the Earth's core unleashes all the volcanic fury, which means the Earth becomes a molten mass which would destroy the world.

While the parallel world is collapsing, things on our world are going along as scheduled, so we know what is going to happen unless the Doctor can manage to go back to our Earth AND get there before it was too late.

Will he be able to do both?  He's the Doctor, what do you think?

As it so happens, when he does manage to escape the collapsing parallel world and return to ours, the Doctor finds that things are not exactly like on the other world.  Sir Keith for example, IS involved in a car accident, but he survives.  With this, the Doctor realizes that history is not inevitable.  The Doctor is able to stop the Inferno project, while even in this reality it is too late to save Professor Stahlmann by being turned into a monster as a result of the ooze emerging from the Earth's core.  At least it isn't as bad as on parallel Earth where Stahlmann turns many to monsters, including Platoon Under Leader Benton.

Inferno ends with Petra and Greg, who have formed a bond, going off together and the Doctor managing to move the TARDIS console a few seconds into the future and a few yards outside his garage.  Despite having called the Brigadier a pompous idiot, he humbly has to ask for help in retrieving the console from the rubbish heap its landed on.

Inferno was stretched because the original Don Houghton script dealt only with the drilling story and it was felt that it would not be enough to sustain a seven part story.  As such, we got the parallel storyline, which to be honest never felt thrown in but was integrated beautifully.  By giving us a parallel universe we get two things that a more direct story would not:  first, we would have seen that what happened in that world could happen in ours (giving us a frightening sense of foreshadowing) and two, we had a chance to see the regular cast go out of their comfort zones and give us a range that had not been tapped. 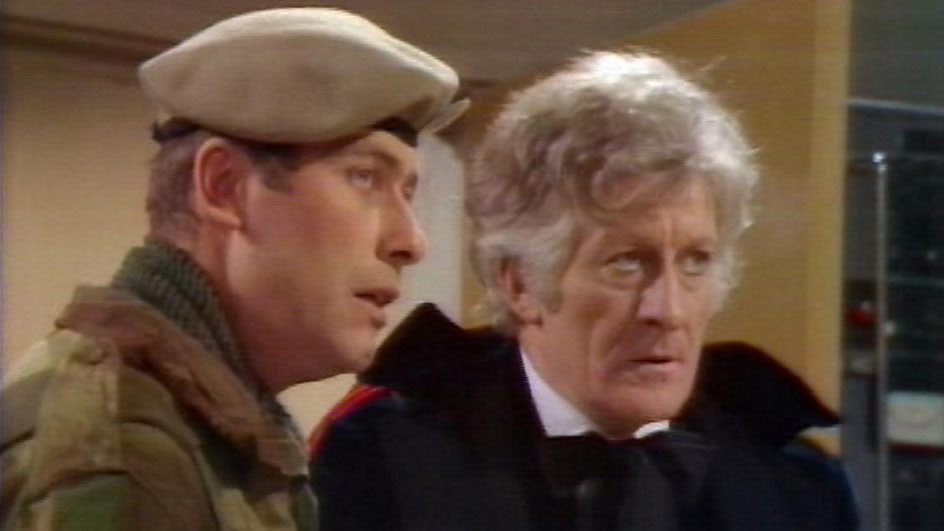 Because we have gotten to know the Brigadier, Liz Shaw, and Sergeant Benton in the preceding stories, seeing them in Inferno is quite a shock.  Rather than the pleasant and kind figures we've been with, almost a family to The Doctor, we see cold, ruthless, murderous figures.  Of the three, it is Levene's Benton who shines the strongest.  Inferno is John Levene's finest hour as an actor on Doctor Who up to now (and perhaps in all of his time on the show).  His transformation from the pleasant, genial sergeant to the brutal Under Platoon Leader is a revelation, one where he slips into both characters so brilliantly one can see either of them as real.  Levene has a third transformation, into a Primord (the Wolfman-like monsters), and when he is taken down by the other Primords is a terrifying sequence.

Courtney and John in the dual roles are also top-notch, the former more brutal than his counterpart, and in the case of the latter, her growing shift from mindless military cog to one who questions whether what is going on is right is, in her final Who story, a wonder to watch.

As for the guest stars, I thought Newark and Dunn played their parts excellently, where the growing affection in our world matched the more established romance in the parallel world.  They didn't have to play as if they were lovers or falling in love, but with pauses, glances, and the dialogue, we learn all there is to learn.  Pooley's Professor Stahlmann (how many times are professor the villains on Doctor Who?) was curt and unpleasant, which was correct, making him unlikeable and thus perfect for the part.

In regards to Pertwee, he proved in his debut season of which Inferno was the conclusion that he basically now OWNED the part.  He managed to rattle off some amusing lines, such as in Episode Two where Stalhlmann dismisses the one computer that warns of danger with the line, "That computer is oversensitive.  Its data is unreliable."  To which Pertwee's Doctor retorts, "You talk abou that thing as though it was your maiden aunt."  Pertwee brought a sense of seriousness to Inferno in both worlds, of a figure who knew what he was talking about and grew impatient when those who didn't kept getting in his way of saving them all.  Pertwee manages to be funny, clever, and rational.  He can be funny without being ridiculous (something which sadly not all his successors managed...Smith...).  Throughout Inferno, Pertwee never makes light of the situations and remains totally convincing as the Doctor, showing he does have compassion for even those who haven't.

In Episode Five, he shouts, "Don't touch him, Brigadier," momentarily forgetting that he is NOT the Brigadier he (and we) know, but the cold and ruthless Brigade Leader.  This gives us a glimpse into the humanity of the Doctor.    When he does return in Episode Seven, he snaps at whom he calls "Brigade Leader", and I continue to marvel at how good Jon Pertwee was as The Doctor.

Houghton's script not only manages to take wild turns with the alternate universe storyline, but even manages to poke some fun at some Who conventions.  When in Episode Four the Doctor is brought into the Brigade Leader's office for questioning (and the sight of the Brigade Leader/Brigadier swiveling to reveal an eye-patch is stunning) he demands to know who he is.  He replies "The Doctor."   I'll bet a million pounds someone like a Steven Moffat would have jumped at the chance for a "Doctor Who?" bit, but Houghton instead has the Brigade Leader say, "Doctor.  Doctor WHAT?" which is much more clever.  Upon informing the Brigade Leader that he doesn't have a counterpart in this world with, "But I don't exist in your world," Lethbridge-Stewart replies, "Then you won't feel the bullets when we shoot you."

What remarkably clever writing, both in terms of story and dialogue.

One thing I would like to point out here is how Inferno contradicts long-established NuWho thinking with regards to "Rule Number One: The Doctor Lies."  In Episode Four he attempts to convince Section Leader Shaw of who he is.  She doesn't believe him.

"If you told us the truth, there might be some hope for you."

The Doctor replies, and I quote,

"Your counterpart in the other world would tell you that I'm not in the habit of telling lies, Elizabeth." (Emphasis mine).

He certainly wasn't lying when he was telling those in the parallel world who he was, so we can establish that he wasn't lying about not lying.  This might be one of the reasons why NuWho, in particular the Smith Era, has been such a let-down.  MY Doctor doesn't lie, but a whole generation repeats the mantra, "The Doctor Lies.  The Doctor Lies."  No, he doesn't, and any suggestion that he does has to be erased.  I reject it because A.) it's not true and B.) it serves no purpose.  Yet I digress.

What also works with Inferno are the special effects (the sequence of the parallel Earth being destroyed being quite effective and terrifying), the music, the stunt-work...it's more for a search in what DIDN'T work, which is impossible.

Inferno is a brilliant close to what has to be the best Classic Doctor Who season so far.  A story that is remarkably fresh after over thirty years (think fracking), great performances by the cast, a thrilling adventure, a parallel storyline played with intelligence, and even moments of romance and comedy all make Inferno one of the best Third Doctor stories so far.  Inferno is in a word, brilliant. 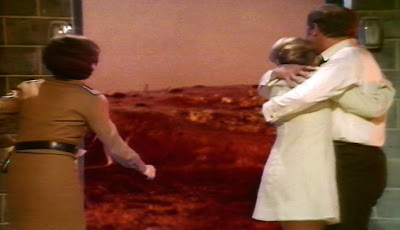 Next Story: Terror of the Autons
Posted by Rick at 1:00 AM