The Banking Crisis of The Doctor

That isn't to say this "Curse of 'Time'" isn't without merit.  We've had a good run of bad Time stories:  TIME-Flight, TIMElash, TIME and The Rani, Closing TIME, The TIME of The Doctor.  Each of these is pretty dreadful (Closing Time is on my Worst Doctor Who of All TIME List, The Time of The Doctor is currently on my revised list alongside Closing Time, and a few listed here will surely join that list in due TIME).

Now we have TIME Heist, and sad to say, the "Curse of TIME" strikes again!

The Doctor (Peter Capaldi) busts in on his part-time Companion Clara Oswald (Jenna Coleman), insisting she go with him rather than on a date (whatever that might be) with Danny Pink (whomever he may be).  Before you can say 'plot contrivance' the TARDIS' exterior phone rings (which is does a lot, having done so in Day of the Doctor and I think The Bells of St. John, meaning it's getting more action now than it has in the past fifty-one years, but I digress).  The Doctor answers, and before you can breathe we're swept into a room with memory worms alongside two figures, the augmented human Psi (Jonathan Bailey) and the mutant human Saibra (Pippa Bennett-Warner).  They have been given instructions from The Architect to use those memory worms as part of an elaborate (and I do mean ELABORATE) plot to break into the Bank of Karabraxos, the most secure bank in the universe.


Sy and Zorba are there to aid the Doctor and Clara in going into the innermost vault, where Sue and Xanadu will find their motives for breaking into the Fort Knox of the galaxy.  Why Clara and the Doctor are there, well, we're not exactly sure of at the moment.

Facing off against them is Miss Delphox (Keeley Hawes), who will use the Teller, a monster who can detect if someone has guilt on their mind.   The break in continues, and while Miss Delphox thinks she's taken care of the problem, she really hasn't, for our robbers continue heading in, down, all around to find out what they are looking for and why they are there.  There appear to be losses: first Zanzibar appears to sacrifice herself via a disintegrator when they stumble onto the caged Teller, then Sam-I-Am does the same when he distracts the freed Teller to save Clara, choosing to die rather than have his brain melted. 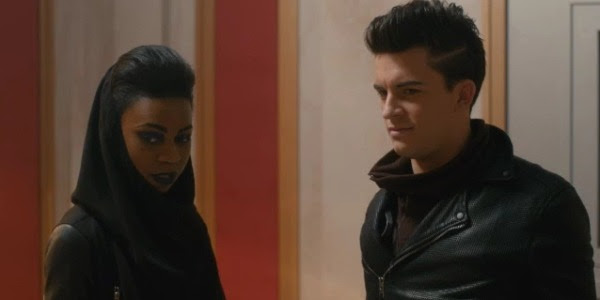 While Psycho managed to get the ball rolling in opening the vaults, The Doctor finds that only one vault though, stubbornly refuses to open, but fortunately solar flares are causing security issues.  He now sees that this isn't a bank heist, but a TIME-TRAVEL HEIST, and The Architect timed it exactly so that they could take advantage of said flares to enter.  Now the Doctor and Clara finally get all the vaults open, and they find what they are looking for, at least in regards to Zuzu and Si: a neophyte circuit that can replace any lost data and reboot any system (so he can have the memories of his family restored) and a mutant suppressor (so that Sandbar won't go all 'Rogue' on people, since with just a touch Zim-Zam takes the form of whoever is touching her).

As a side note, I can see why that would appeal to co-writer/showrunner Steven Moffat...to replicate himself onto others?  Would satisfy his ego, but again I digress.

The Doctor and Clara are themselves captured by Miss Delphox, but their brains aren't melted just yet by the Teller, whom we have learned is...THE LAST OF ITS KIND! (WOW...never heard THAT one before!).  We have to wait for The Director, and see what HE has to say and what HE decides.  Fortunately for them, the guards are really Secondary and Zenida, and their "deaths" really were just ways to teleport somewhere and magically return in time to save the time travelers.  We still haven't got the reason for the Doctor's reason to go into this bank, but now it comes.  He figures out he has to go into Director Karabaxos' personal vault.

There, they find waiting for them is...MISS DELPHOX!  No, it ISN'T Miss Delphox, it's The Director, only she looks exactly like Miss Delphox!  She's a clone, and the Doctor realizes that The Architect who gave them the instructions at the very beginning is someone the Doctor hates (in a Dream Lord kind of way, I imagine).  We see as the Bank is collapsing that the Doctor gives Director Karabaxos the TARDIS number and to call when she has regrets about her life.  In return, Miss Delphox releases the Teller, who starts taking the Doctor's memories, including the ones he's purposefully wiped.  He now sees that the Teller is NOT the last of his kind, and there's a female Teller in this vault.  Sweeping back to the very beginning, we learn that call to the TARDIS came from an aged Miss Delphox, who wants memory worms to wipe out her regrets.

As Clara goes off on her date, the Doctor comments to himself, "Robbing a bank?  Beat THAT for a date!" 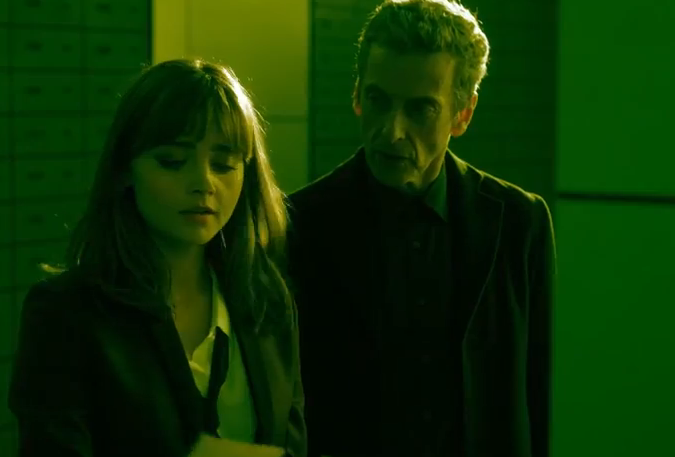 Call it disinterest, call it apathy, call it disappointment, but for the life of me as I watched Time Heist all I kept wondering is "Why?" and "How?" but most dangerous of all, "Who Cares?"

It might be good to point out that Thompson has been responsible for Curse of the Black Spot and Journey to the Centre of the TARDIS (which rank at Numbers 5 and 14 of the Worst Doctor Who Stories of All Time Respectively) as well as the vaguely racist Sherlock story The Blind Banker and the absolutely nonsensical The Reichenbach Fall.   In short, Thompson is a dangerous man whenever he takes up his pen: one can be guaranteed his stories will fold in on themselves deliberately and will confuse 'convoluted' for 'complex'.  Pairing him up with Moffat (whose own obsessions with timey-wimey stories is now parody) is a disaster waiting to happen.

Still, back to my original point.  SHOULD I care about people whom I've learned nothing about?  Sorry, despite Murray Gold's music and Thompson/Moffat's pleas, I didn't care what happened to these two simply because I never got anything of interest.

Not caring about either the characters or their fates is already bad enough, but Time Heist just goes through so many tropes from both Thompson and Moffat that we've seen before it almost plays like a 'greatest misses' episode of both their work and Doctor Who in general.

That big speech the Doctor gave to the Teller as he was having his memories sucked out of him?

The monster just being someone who wanted to find the woman he loved?

A little Amy's Choice, I believe.

The villain turning out to be the head of the operation?

Voyage of the Damned. 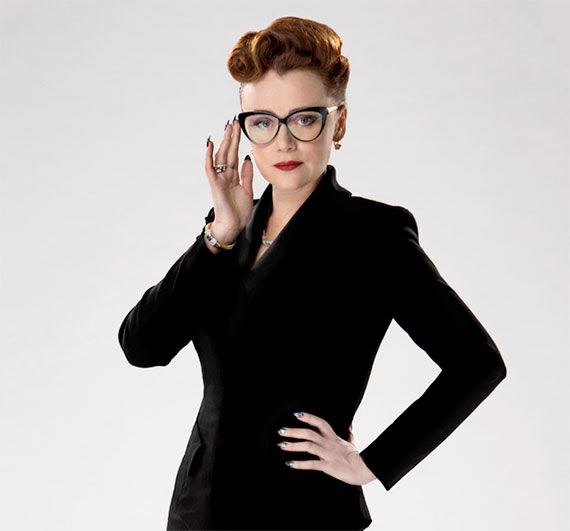 Speaking of our 'freak-of-the-weak' (sic), Hawes' Miss Delphox isn't a great threat.  She plays it a bit like she were Madame Kavorian's sister, vamping it up to the Nth degree.  Furthermore, I am calling out Thompson and Moffat for cheating.  Throughout Time Heist Miss Delphox makes it clear the Director is suppose to be a man/male.  Miss Delphox constantly refers to the Director as 'he' or 'him'.  Having it turn out to be a clone of Miss Delphox is unfair to the audience.  It's not deliberate misdirection.  It's a flat-out lie to the audience.  Would it have made much difference if we thought the Director was a woman?

The story itself is so contradictory.  When the Teller is melting someone's brains, Miss Delphox tells the beings around her that the Teller NEVER makes mistakes.  A little later, we find that the person whose head was shrunk was not the person they were actually looking for (Zorro having managed to disguise them all).  Therefore, we find that the Teller WAS capable of making mistakes.  Is it me, or is anyone else bothered by such inconsistencies?

This leads to other questions, like, hasn't this super-secure bank ever experienced any solar flares and thus knows what to do?  If this is the first mistake the Teller has made, that would still be odd, but if it has made mistakes in the past, why trust it to figure out who's breaking in?

Why is it necessary for the Doctor to go through all these hoops to get at some memory worms?  Can't he just...get some?

If he had orchestrated this whole plan, why not just get at this THE FIRST TIME?  Seriously, as I understand it, the Architect broke into the bank in advance of breaking into the bank.

Does the Doctor like playing an odd version of a scavenger hunt?

Why is Clara even necessary in this adventure? 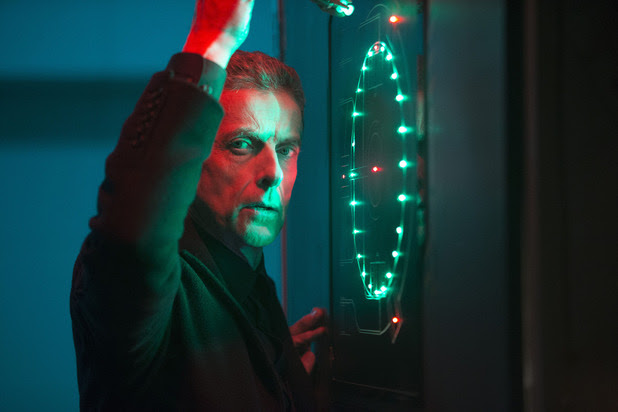 All that in and of itself is already dreadful, but we throw in some more awful, awful bits.  Despite the promises Capaldi's Doctor is almost like Matt Smith's Doctor (never a good thing).  He seems genuinely puzzled about what a 'date' is and why Clara would rather do that than go travel with him (even if it is on a part-time basis).  About the only thing so far that makes Capaldi's Doctor 'dark' is that he is more pragmatic about having characters die (even if here, Moffat cannot resist showing us that Psi and Saibra are actually still alive, another Moffat trope, in fact THE Moffat trope).  Apart from that, it might just as well have had Matt Smith's dimwitted and befuddled Doctor all over Time Heist's script.

As a side note, last week's story where the Doctor wondered why Clara needed three mirrors...that was something that Matt Smith's Eleventh Doctor would have said, not a more serious, 'darker' Twelfth Doctor.

I hate it the transitions from one scene to another, where the visual effects were more important than in having some order or cohesion.  Finally, the music was so unbelievably brain-killing.  From the cutesy 'why go on a date when you can go with me' music to the 'DRAMATIC' music blaring out when the Doctor declares this is a TIME-TRAVEL heist (with thunder to accentuate all this), it just seems Moffat and Company do treat Doctor Who fans as idiots who can't figure things out without music cueing emotions.

However, given some of the NuWhovians I've met, perhaps he's not so far off base.

The failure of Time Heist has less to do with ineptness (though there's plenty of it) and more with sheer boredom.  A bank break-in should be tense and exciting, but here, it's dull, rushed, and nonsensical.

In other words, a typical Doctor Who story in the Moffat Era.

Next Story: The Caretaker
Posted by Rick at 1:23 PM