The Fantastic Voyage of The Doctor 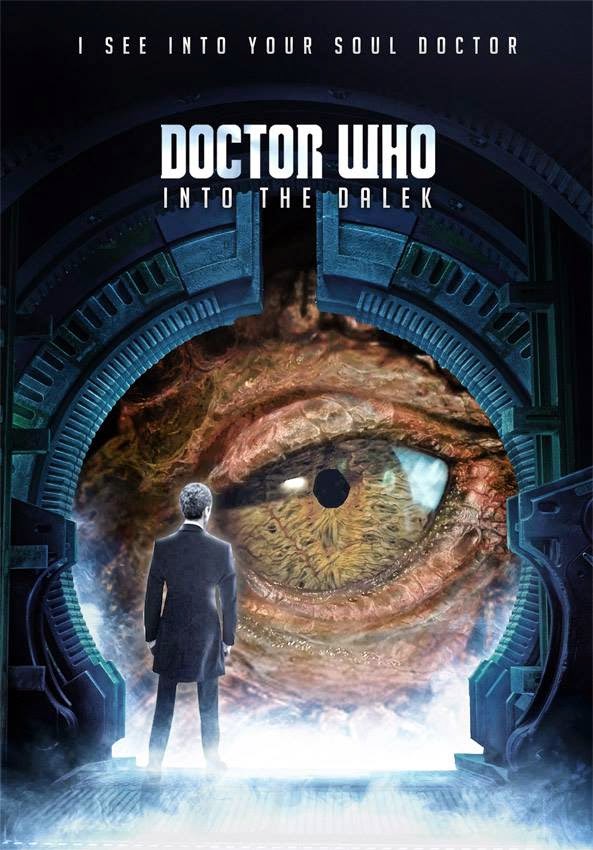 This is what the Doctor (Peter Capaldi) asks his part-time Companion Clara Oswald (Jenna Coleman) in Into the Dalek, to which Clara answers that she doesn't know.  This episode has some great visuals, a strong performance by Capaldi, and at least an interesting premise.  It is unfortunate that in many ways, it evokes other stories, better stories, and that there is a certain repetitiveness to Into the Dalek.  There are also questions of logic which we'll get to in a bit but for now, it is good to see Doctor Who really trying to be darker and grittier.  Note I said 'trying'...

The Doctor rescues Journey Blue (Zawe Ashton), about to be killed by an onslaught of Daleks.  Her brother is already dead, and the Doctor thinks he should be thanked, not criticized.  Journey takes the Doctor to her ship, a medical ship that holds a particular patient: a Dalek!  Not only is this Dalek a patient, but now the crew wants the Doctor as a doctor to enter the Dalek to see why the Dalek is...good.

Meanwhile, back on Earth, Clara meets Danny Pink (Samuel Anderson), a former soldier who has created the Coal Hill Cadets, a bit like a Junior ROTC Program for the same school where over 50 years ago, the very first Doctor Who story began.  (A side note: Coal Hill School may be the ONLY acknowledgment of Classic Who the current show will recognize).  There is a suggestion of a past for our dear Mr. Pink, as he sheds a tear when he is asked by students whether he ever killed someone outside war (which makes me wonder if British schools are more lax about hiring than American schools, but I digress).  It appears that Clara and Pinkie find something more than rapport, though Clara is not particularly fond of soldiers.  Never mind, for the Doctor comes to Clara, still carrying the coffee he went for three weeks ago and takes her to the ship, so he can be his 'carer' (as in, she cares so he doesn't have to). 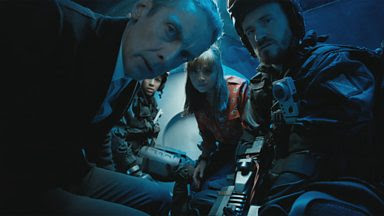 We now, thanks to a molecular nanoscaler, take the Doctor, Clara, Blue, and a few guards and shrink them to allow them to go "into the Dalek", whom the Doctor nicknames "Rusty" to see what ails him.  As they go into the heart of darkness, they see that Rusty is in a bit of shock, having seen 'beauty' in the form of the birth of a star, and finding that no matter how often the Daleks exterminate, resistance to life is futile.  The Doctor, thanks to his handy-dandy sonic screwdriver, fixes the radiation leak which is causing it to go good, but wouldn't you know it: that repair restores it to being a regular Dalek, evil, determined to kill.  Worse, it allows the Dalek fleet to come storming onto the ship.

The Doctor is angry at himself for believing such a thing as a good Dalek was possible, and Clara is angry that he's about to let them all die.  So angry she slaps him, hard.  However, the Doctor thinks there might be a way out: to unlock Rusty's suppressed memories and perhaps get it to return to seeing the beauty of life.  The Doctor's plan involves linking his mind to that of Rusty's, and let it see the glories of the universe.  However, the Dalek doesn't just see that.  He sees the Doctor's hatred for the Daleks, and from the Doctor Rusty learns that all Daleks must be destroyed.  Rusty then goes after the invading Dalek army and defeats them, in the end Rusty tells the Doctor, "I am not a good Dalek.  You are a good Dalek."  Journey wants to join the Doctor but he rejects her, telling her he doesn't like soldiers.  Clara is popped in to having been gone 30 seconds, and she comes out of the cupboard wearing a new outfit and going off with Danny Pink for drinks.

Is it me, or was Into the Dalek a bit of a hodgepodge of other stories?  I don't mean the most obvious influence on Steven Moffat and Phil Ford's screenplay (incidentally the first time there's been joint screenwriters on NuWho since The Waters of Mars, which was also co-written by Ford, that time with then-producer Russell T Davies): Isaac Asimov's Fantastic Voyage.  I mean other Doctor Who stories.  The imagery of a group of Daleks storming a base reminded me of Resurrection of the Daleks, when the Daleks force their way in.  However, in particular I suggest that Into the Dalek looks a bit like a remake of the Ninth Doctor story Dalek.

Beat for beat, it's pretty much a repeat, or at least a rehash, of what we've seen before: the 'dark/angry' Doctor encounters a debilitated Dalek, it has human emotions, once awakened it goes on a murderous rampage, and find that the Doctor and the Daleks are if not moral equivalents at least mirror opposites.  Even in the concluding thoughts they seem to be the same: in Dalek, the title character tells the Doctor, "YOU would have made a good Dalek", in Into the Dalek, the title character tells the Doctor, "YOU are a good Dalek".

I leave it up to you whether or not hitting on the same theme (the Doctor harbors murderous rage equal to his archnemesis) shows a show that is slowly running out of ideas (which in its first twenty-six years, it didn't), but in retrospect I wonder whether going over territory already seen is indicative that Doctor Who is now in danger of repeating itself (knowingly or not).


There are also other elements in Into the Dalek that are signs of concern, that this episode was more about adding to a season-long arc rather than a standalone episode.  In what should have been an extremely tense moment, one of shock and horror and sadness, we get thrown into a jolting reminder that we're stuck with another 'teaser' bit about how the season will end.    Gretchen (Laura Dos Santos), a tough soldier about to be killed by the Dalek's antibodies, suddenly finds herself in a cozy tearoom with Missy (Michelle Gomez, and in a side note, with people surnamed Dos Santos and Gomez, Doctor Who may actually have more Hispanics on British television than most American shows.  When was the last time a Latino popped up in The Big Bang Theory?).  Seeing her cheery/nutty Mary Poppins character asking if she'd like some tea may have struck Moffat as genius, but its only effect on me was to take me out of the scene altogether, robbing me of both pathos and tension.

It also is yet another sad example of a running Moffat motif: his inability to kill characters permanently.  I had speculated about this before, but Into the Dalek is yet more proof that The Moff is hopelessly repetitive and frankly a bad writer (Emmy be damned).   What could have been a great and tragic moment turned into a 'what?' moment.

Same goes for Danny Pink's debut.  Oh, a war veteran haunted by the past...what a concept.  Perhaps Ford and Moffat thought that having two soldiers in these parallel worlds, a girl named Blue and a man named Pink, was sly and witty commentary about gender roles: the tough warrior Blue and the tearful ex-warrior Pink (though my mind puts more blame on the latter).  Something about this set-up rubs me the wrong way.  In the same way Sherlockians go into knots trying to make the Richard Brook/Jim Moriarty scenario sensible as part of some bizarre master-plan, I find myself trying to look deeply into this Girl Blue/Boy Pink business.  I cannot shake the idea that there is something more than meets the eye in this Girl Blue/Boy Pink set-up (or it might be that Moffat is simply so full of crap and devoid of ideas he thought this was all shockingly clever).  However, given that he's an ex-soldier, and the Doctor doesn't like soldiers (except for Security Agent Sara Kingdom in The Daleks Master Plan, or UNIT and especially the Brigadier, who was basically his best friend), will there be difficulties ahead as the Doctor/Clara/Danny triangle begins to set in?

Another question/comment: will people ever learn to shoot at a Dalek's eyestalk?  Seriously, after fighting Daleks all this time, why doesn't anyone aim for the eye?

One last question before we go into what did work in Into the Dalek.  What purpose did Clara serve?  I know it was to be the Doctor's 'conscience', which is all well and good, but why did the Doctor feel the need to pick her for this journey?  Couldn't he have popped in to select any other Companion, like Sarah Jane or Rose Tyler or Nyssa, and have them work with him?  Well, perhaps because at this point Clara is the only one who sees the Doctor when she sees his face, but I never got this part-time Companion business where the Doctor picks up Clara, they go for an adventure, then he drops her off home as if nothing ever happened.


Now, as for the things that did work in Into the Dalek.  Capaldi, in his first full story away from his predecessor, does go into a darker version, one that isn't as strict about life.  A soldier finds himself surrounded by the Dalek antibodies, and the Doctor throws him something and tells him to swallow it.  He does, but the antibodies still destroy the soldier.  Everyone is shocked and angry.  When the others condemn him when antibodies kill another soldier, he counters by saying, "He was dead already. I was saving us!"  When he finds that the Dalek has tapped into his dark ideas of the Daleks and his hatred for them, Capaldi makes the shock of the Doctor's plan going awry real and almost tragic.  It looks like Peter Capaldi was indeed a good choice for the role, his coldness and more dare I say ruthless nature being extremely strong.

The script also at least has a token acknowledgement that it is a bit of a rip-off.  When the Doctor sees the molecular nanoscaler, he quips, "Fantastic idea for a movie, terrible idea for a proctologist (emphasis mine)".

Perhaps I'm grasping at straws, but I hope that Journey Blue will come back and will be a full-time Companion.  It would not only be good to have a Companion from the FUTURE (I know Earth Girls are Easy, but do we always have to have them with the Doctor?) but she seems strong, capable, intelligent, and eager...qualities that most NuWho Companions have been lacking.

I'm talking to YOU, River Song!

Into the Dalek had rated a little higher initially, but then as I thought on it other aspects (the repetitive nature of the story, the Missy cameo) all started to push the story down.  Still, on the whole it was much better than I read, and executed much better than I had hoped.

And as for the question of whether the Doctor is a good man, Clara is unsure, but at least knows he is trying to be one.  Given how she has seen the Doctors in action, how could she have any doubts?

Next Episode: Robot of Sherwood
Posted by Rick at 1:01 AM