The Mummy Dearest of The Doctor 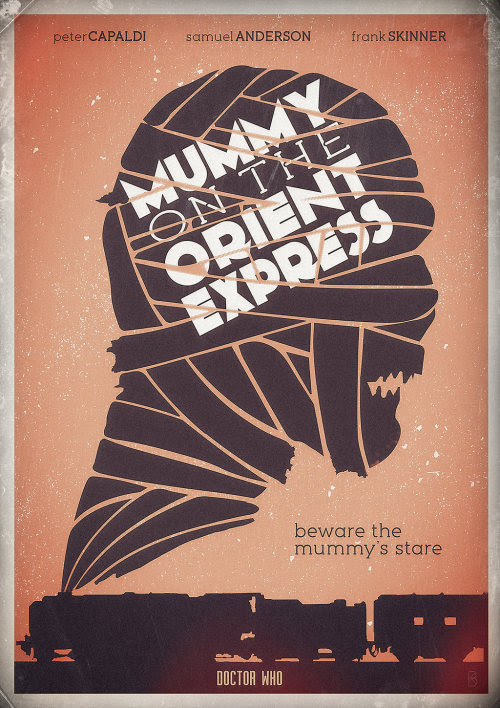 STORY 252: MUMMY ON THE ORIENT EXPRESS

For far too long, I had despaired about the direction Doctor Who was going.  This latest season showed some simply dreadful stories (at least two of which have already earned a place in my Worst Doctor Who stories of all time).  That is not something to be proud of.  Mummy on the Orient Express, based just on the title and premise, appeared to be yet another romp through idiocy.  How fortunate then that MOTOE not only defied expectations, but gave us something we long-suffering viewers thought we'd never see.

The Doctor (Peter Capaldi) and Clara (Jenna Coleman) board a spaceship that looks like the fabled Orient Express train, complete with steam.  Aboard however, there is a great danger: a figure who looks like a mummy, visible only to the person who is about to die.  Once this person sees the mummy-like figure, they have sixty-six seconds to live.  The mummy appears to not discriminate: taking from the wealthy passengers and humble cooks with equal menace.

However, while Clara finds herself locked in with Maisie (Daisy Beaumont), niece of the first victim, and a sarcophagus, the Doctor finds himself working with Perkins (Frank Skinner), the O.E.'s Chief Engineer, who suspects there is something to this tale of murdering mummies.  The Doctor appears to have fallen (perhaps willingly) into a trap.  The Orient Express in space is really a laboratory, where a voice going by Gus (John Sessions) has gathered figures (including the Doctor) to solve the mystery of what the creature, called The Foretold, and find its weakness.  They don't have much time, as The Foretold will be eliminating them one by one.   When The Doctor takes a call from Clara and doesn't get off the phone fast enough to please Gus, Gus responds by killing off the kitchen crew and leave them floating in space.

The Doctor has to overcome both any hesitancy about mourning for the death and put others in danger to solve the mystery (which he does: the Foretold is a soldier long-forgotten, and with the Doctor's 'surrender' the soldier disappears).  Gus, having found what it was looking for, slowly removes the oxygen from the spaceship and is going to blow it up.  The Doctor is able to rejig the Foretold's phase-shifting device to get the survivors into the TARDIS.  Clara awakens to find herself on a planet, where at first she is displeased the Doctor both put others in danger and thought little to nothing of other people's death.  The Doctor tells her that it had to be that way if he wanted to save them all. 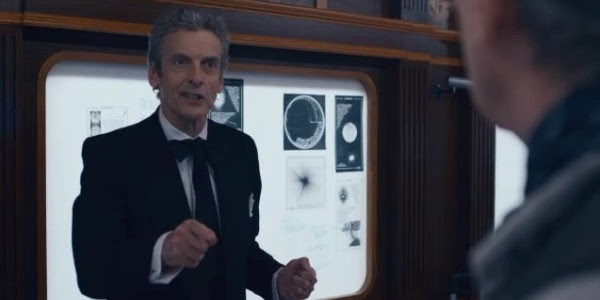 Unlike all the other Season Eight stories (and quite a few NuWho stories overall), Mummy On The Orient Express felt like it was written for Peter Capaldi, not Matt Smith.  There was little joking around in MOTOE, no silliness to try and make light what was meant to be a serious and dangerous situation.  Instead, we got at long last that long-promised 'darker' Doctor, one where Capaldi was finally able to show what he could do with the part without having to placate the Smith fans who enjoyed his 'Idiot Doctor'.

Capaldi's performance in MOTOE was simply his best this whole season.  It reminded me of what Sixth Doctor Colin Baker said about what kind of being the Doctor was.  Baker said that the Doctor could casually walk over a dead body without expressing any emotion, then see a dying butterfly and be genuinely mournful.  Baker observed that it wasn't because the Doctor didn't care about humans or was passionate about butterflies, but it was because the Doctor thought in different ways than his Companions.  Similarly, we see Capaldi in MOTOE becoming an amalgamation of his predecessors: the manipulativeness of the Seventh, the casual intelligence/humor of the Fourth when he runs up to the Foretold and says, "I'm the Doctor.  I will be your victim this evening," (the offering to the Professor of what appears to be a cigarette box but instead being jelly babies was a nice touch) and the costume of the First (which actually looks better than his official costume in my opinion).

Capaldi's Doctor is one who isn't going to waste time mourning, a cool, rational being who sees the big picture (he needs to work fast to save everyone) and the niceties of 'having a moment' for someone who isn't around to appreciate it have to be pushed aside.  He does what HAS to be done, and Capaldi shows that the Doctor is a rational being, and despite Clara's protests to the contrary, does have a heart(s).  Partially in order to see the Foretold for himself (and I suspect, partially to save Maisie, he quickly gets her memories to make the Foretold think he is Maisie).

Capaldi is excellent in MOTOE, and he is aided by a good script (by first-time Who writer Jamie Mathieson.  As a side note, it's a bit sad that Mathieson was able to write a real Doctor Who/Twelfth Doctor story while Doctor Who showrunner Steven Moffat appears to have no ideas, period).  Calculating, intense, but someone who does in the end live up to being a hero, we have in Peter Capaldi someone who appears to finally have come into his own.

Mathieson's script also benefits from giving a logic to the idea of a train in outer space and a genuine sense of danger if the Foretold is not stopped.   He also manages to shunt Clara away for long stretches, which is nice because that big-eyed whiner wore out her welcome long ago.  Instead, Mathieson gave us Skinner's Perkins, showing that the Doctor could do with a Companion who is a.) reasonably intelligent, b.) not in love/lust with him at every turn, and c.) able to actually contribute something to help solve the mystery.  Doctor Who 2.0 has never really made an effort to have either a Companion from another time/planet or a full-time Male Companion (almost always opting for a 20-21st Century British girl between 19-30).  Given how one of the best Companions of All Time was Frazer Hines' Jamie McCrimmon (who formed a great double-act with Patrick Troughton's Second Doctor) it is almost refreshing to see someone from the future, who is an older man, capable of being a great Companion.  Perkins, while declining a chance to serve on the TARDIS, would nonetheless be welcome to return as a guest star (which is NOT the case with Moffat's Galatea, that monstrous River Song).

The script also allows Capaldi some great lines.  When discussing whether the first victim, an elderly woman, died because of a monster or simple old age, the Doctor says, "Old ladies die all the time.  It's practically their job description".  It sounds harsher with Capaldi's Scottish accent, but nonetheless both genuine and even amusing.  Perkins at one point says, "I can't tell if you're a genius or incredibly arrogant", to which the Doctor doesn't appear nonplussed by this apparent attempt at an insult. 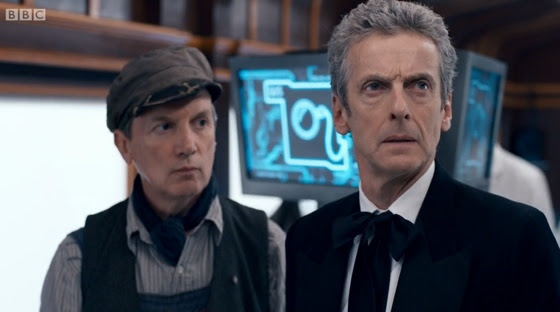 For me, while Mathieson might have drawn from Agatha Christie's Murder on the Orient Express for inspiration, it appears that there is an homage to another Christie classic.  In And Then There Were None, a self-appointed avenging angel struck down victims one by one based on the level of their 'crimes'.  In MOTOE, the Foretold selects the victims based on the state of their health, striking at the weakest first until reaching the strongest and healthiest.

What few bits of humor do creep in (such as the Doctor's psychic paper revealing the thing the conductor fears the most is a 'mystery shopper' or the Doctor's use of "Are you my Mummy?") are not as groan-inducing as they would have been because they are drowned out by everyone taking the situation seriously.  In short, the humor never overwhelmed or took center stage from what was meant to be a more serious, even scary story.  "Grief counseling is available on request," Gus tells the survivors after the Foretold has struck again in his lab.  In other people's hands, this would have come off as bad humor.  In Mathieson and director Paul Wilmshurt's hands, it is almost Hal-9000 like in its coldness, even sarcasm.

If there were some things to pick at with MOTOE, it is the perhaps too-rushed ending with the Foretold, but that is generally minor.  Gus, however, is another story.  Unless he ties in to a future tale or is reintroduced as a potential recurring villain, the fact that no answer as to who Gus is or why he went through all this to get the Doctor aboard his train of death will be most frustrating.  The tie-in with Samuel Anderson's Danny Pink seems like an afterthought or a way to get Anderson and Pink SOMEHOW into the story when they weren't needed.

However, with a top-notch performance from Capaldi, a blissful near-absence from Coleman's Clara (please go away), a genuine threat and logic to almost everything in the story, Mummy on the Orient Express is by far the best Twelfth Doctor story and one of the best NuWho stories in a long, long time.

The train-wreck that was Doctor Who might finally have found its groove again.  However, is this a case of Doctor Who being on the right track or is it all 'too little, too late' and has that train already left the station?