The Boxing Day of The Doctor 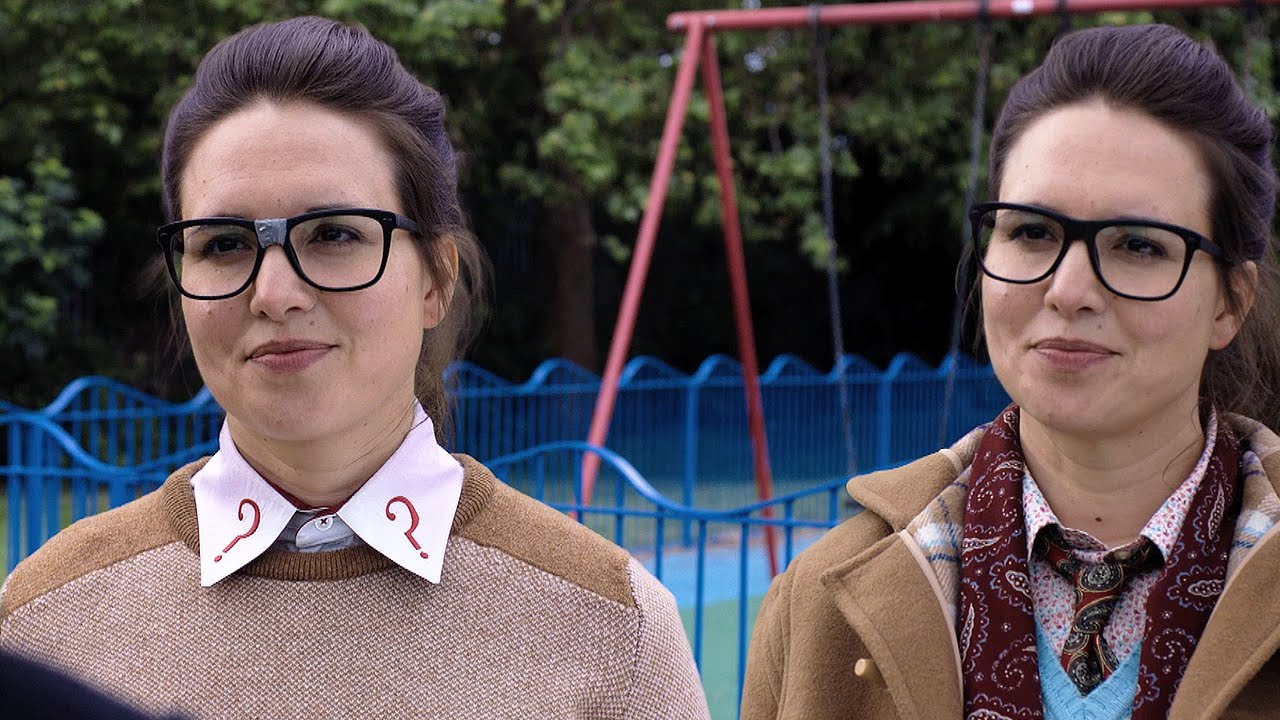 Well, now that I've seen the second part of The Zygonic State (The Zygon Inversion), I can say at least one thing from the get-go.

The much-praised anti-war speech by The Doctor was a.) not very good, and b.) not well delivered.

Apart from Kyle Anderson (who'd praise Steven Moffat's farts as smelling like Chanel Number 5), I can't think who would think this was some brilliant masterwork.  Oh, there was fan-service, a plea for peace, and some pretty odd moments where one thinks, oh well, the show's about to go down in flames like that airplane Bonnie shot down, so why not?

Bonnie (Jenna Coleman in a dual role) has shot down the plane carrying the star of the show, Osgood (Ingrid Oliver) and her very special guest star The Doctor (Peter Capaldi).  Or so she thinks.  Trapped within her pod which looks like a dream, the regular star of the show, Clara Oswald (Coleman) is able, despite her dream-like state, to control Bonnie's actions, so Bonnie is not aware of what she's doing.  Their link however, is still strong enough for Bonnie to threaten Clara with her life unless she tells Bonnie about the Osgood Box.  Clara is able to tell enough without revealing all, and Bonnie is aware that Clara is not lying, so it's off to the Black Archives to retrieve the box.

This box has the power to reveal all the Zygons living in anonymity in the world, all 20 million of them.  Bonnie wants to unmask all the Zygons to bring about mass chaos and a total war with the 7 billion humans, and she wants that box.

Back on Earth, we find the Doctor and Osgood are still alive, with the Doctor having apparently borrowed a parachute from James Bond (a Union Jack parachute because...well, camouflage according to The Doctor).  Osgood stubbornly refuses to answer whether she is the human or Zygon Osgood, merely that she's 'Osgood'.

Bonnie arrives at the Black Archives, Clara in her pod in tow. Bonnie is enraged to discover why it's called the Osgood Box: there are two of them, one red, one blue (does the U.K. have equivalent colors like the U.S. has red for Republican, blue for Democrat).  She needs to know which one to use, and for that she needs the Doctor (Clara truthfully not knowing which one is which).

Fortunately, in comes The Doctor, Osgood, and Kate "My Daddy's Better Than Your Daddy" Stewart (Jemma Redgrave).  At first, we think Kate "Don't Bring Up My Father the Brigadier Because Only I Can Do That" Stewart is a Zygon, but we find she isn't.  Back in Truth or Consequences, New Mexico, she killed her Zygon attacker with "five rounds rapid".

I guess I'm suppose to squee at things like that.

Just as Bonnie is ready to use the blue box to unmask all the Zygons, we find the box has two buttons: Truth or Consequences.  One will unmask the Zygons, the other will keep them as humans forever.  Kate "You Know Who My Father Is" Stewart is ready to push her own buttons, one of which will release the Z67 chemical weapon, known as "Sullivan's Gas" after its creator, former Doctor Who Companion Harry Sullivan.  The other will detonate the nuclear warheads under the Tower of London, killing everyone.

Anyway, the Doctor gives a major address about war.  "We'll forgive.  We'll forget.  And the cease-fire will stand".  He urges negotiations so as to prevent total annihilation by both sides, and both back away from the boxes.  Bonnie has decided to adopt peace and tells her Zygonic State supporters to stand down, the cease-fire has returned.

As the Doctor and Clara leave, the former invites Osgood to be his Companion.  She shockingly declines, since she's got Earth to protect.  She also has a new sister: BONNIE, who now has become Osgood's double.  We still don't know if the original Osgood is human or Zygon, but there you are. 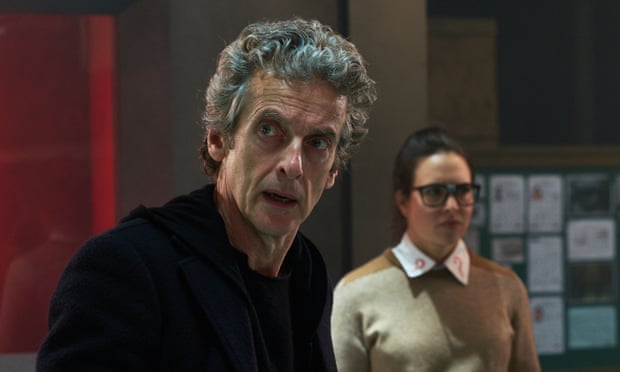 For all this talk about how 'powerful', how 'moving', the Doctor's big speech about the evils of war, I was not moved by it (Murray Gold always putting in music when silence would have made it more powerful, indicating to me that NuWhovians in particular have to have their thinking done for them.  They cannot be trusted to be moved by the words alone, they need sad music to remind them of the emotion in the scene).  On second listen, I think it was better than I remember, thanks to Capaldi giving it his all (in this case, knowing it is suppose to be a major address).

However, I am not convinced that Zygella (as the Doctor nicknames Bonnie) would be moved by merely appealing to the 'better angels of her nature'.  If The Zygonic State Parts 1 & 2 is suppose to be an allegory about ISIS' war with the rest of civilization, then we can see both by the two-parter itself and the reaction to it that Europe might as well surrender to the Caliph and start beheading the few Christians left in Europe (and finding a tall enough building to toss its gays off of.  Might I suggest the Eiffel Tower?).  ISIS, for those not in the know (like perhaps cowriters Peter Harness and Steven Moffat), is a death cult, one that in its own words "loves death the way (the infidels) love life".  They WANT to die, they WANT to kill and subjugate all those different from them, even other Muslims who are not as 'orthodox' as they are (Heaven knows what would happen to the contemplative Sufis under ISIS).

You cannot negotiate with ISIS.  You could not negotiate with their spiritual forefathers, the National Socialists of the Third Reich.  They both have a very clear-cut ideology: total destruction of 'the other' and either subjugation or extermination of anyone or anything that opposes them in any fashion.  The Doctor, whom I cannot imagine thinking he or the Time Lords could negotiate peace terms with the totalitarian Daleks (which were inspired by the Nazis), should above all else know this.  Yes, he is a pacifist who opposes violence (even when that violence saves his life, like when The Brigadier's Daughter used it for him and Osgood).  That is within keeping to his character, as is his determination to stop a menace with intellect rather than brute force.

However, for all the bizarre complaining Bonnie's Brigade does about how they don't want to live as humans (reminding me, for some reason, of the X-Men character Mystique, who made a more rational rationale for why she joined the war against the humans), to suggest that all she (and by extension, ISIS) needed was a big hug to see the error of her ways is more than absurd.

It's insulting to the viewer's intelligence.  Then again, given how Doctor Who's audience has shrunk this season, that might be an accurate perception of the fanbase.

Leaving aside the lack of logic in how the Doctor just talked everyone into surrender, let's go over some other things I had a problem with.  In The Zygon Inversion, Clara in her pod is able to control Bonnie just enough to work with the Doctor.  In short, she is able to have some control over her.

And the reason Kate "One Guess Whom I'm Related To" Stewart couldn't do the same in The Day of The Doctor is...

I simply cannot fathom why Doctor Who now has a fear of being truthful.  Look, if you want the Doctor and Osgood to escape via parachute, fine.  Why, however, do they insist on putting in little comedy bits like the Union Jack parachute.  This Zygon terrorism is a very serious matter (more serious given this episode aired a week after Metrojet Flight 9268 was blown up by the real version of the Zygonic State.

Timing is everything, isn't it?

Having this bit of comedy doesn't lighten the mood; it just makes things look more ridiculous.

As a side note, if most Zygons don't want war, why don't we see more Zygons working with UNIT rather than do nothing?

I disliked the "Five Round Rapid" line.  It was there only to make a note of the Brigadier's iconic line from The Daemons (which many NuWhovians wouldn't know anyway, so its inclusion is a bit puzzling).  Redgrave's forced delivery of it didn't help matters, as if she were told to emphasize it specifically because it's a well-known line associated with her character's father.

Also, if one need only shoot a Zygon with a pistol, why was UNIT so terrified of them to begin with?

Oh, continuity...something Doctor Who isn't all that interested in.

Another thing I disliked intensely is again, "Sullivan's Gas". Why drag poor Ian Marter's corpse into this?  Again, was turning nice chap Dr. Harry Sullivan, Royal Navy into some sort of mad scientist meant as a tribute?  Can't wait to see Tegan Jovanka turned into an Australian heroin-addicted HIV-positive hooker as her homage.

Finally, I thought it was Susan Foreman, the Doctor's granddaughter, who made up the name TARDIS out of its initials.  Now, the Doctor claims to have come up with the acronym himself.  Fine way to screw over your own granddaughter, Doc.

Still, there are good things here.  Coleman balanced (mostly) the evil Bonnie and the weepy Clara well enough to make them both distinct individuals.  Capaldi's major address I think was better than I first remembered it.

Apart from that I think The Zygonic State Parts 1 & 2 are not good.  The Doctor, as far as I'm concerned, has boxed me into a corner.  The Truth?  I am 90% sure I will stop watching after Hell Bent.  The Consequences?  I hope a cancelled show.

Next Episode: Sleep No More
Posted by Rick at 4:06 PM