The Highway Robbery of The Doctor

STORY 260: THE WOMAN WHO LIVED

Well, it looks like things are back to normal on Doctor Who.  By that I mean we get another bad episode, though to be fair The Woman Who Lived is what I would call a noble failure: good ideas rattling within its rubbish.   It is a pretty frustrating thing to see potential in a story drowned out by some really bizarre choices.  The Woman Who Lived, which I consider more a sequel to The Girl Who Died than a continuation, is such an exercise in frustration.  Sheer total frustration.  There was so much good within The Woman Who Lived.  It however was sunk by bad decisions regarding story, tone, editing, and resolution.

It did have the benefit of not having Big Eyes Oswald as the Companion, so that might be worth a point in and of itself.

The Doctor (Peter Capaldi) is in search of an alien amulet hiding on Earth as a jewel called the Eyes of Hades.  His journey takes him to 1651, where he inadvertently interrupts a coach robbery by the highwayman known as The Knightmare.  To his surprise, this highwayman is none other than Ashidl (Maisie Williams), the Viking girl from his last adventure.  Now going by the name of "Me" or in this incarnation, "Lady Me", she too is in search of the Eyes of Hades for reasons of her own.

Me is not happy with the Doctor for giving her immortality, Me is more unhappy about the Doctor refusing her request to serve as a Companion, and Me is especially not happy to have outlived everyone and being granted immortality.  After losing her child/children in the Black Death, she has decided to remain childless (and on this I can see her point: why give birth when you know you are going to outlive your children, though it worked out in The Age of Adaline I'd like to point out).

Anyway, the reason she's searching for the Eyes of Hades is because of her collaboration with Leandro (Aryon Bakare) a lion-type alien who can breath fire.  He has crashed upon this puny planet (Earth is always a puny planet to aliens, isn't it.  Wouldn't it be nice if an alien were actually impressed by Tellurians and their civilizations) and in exchange for getting the Eyes of Hades, Leandro (which sounds surprisingly similar to "Leo") will do what the Doctor won't: take her travelling through time & space.

Unfortunately, death is required to open the Eyes of Hades (boy, just writing that made me think writer Catherine Tregenna is being very simplistic, as if she's writing for children, which given Doctor Who's current audience, might not be far off-track).  Lady Me thinks the Doctor or a faithful old retainer would do the trick, but fortunately her highway stealing rival Sam Swift the Quick (Rufus Hound) has been captured and is about to get hung.  How convenient.  As Sam gives a comedy routine for his own gallows humor, Lady Me and Lenny the Lion rush to get the Eyes of Hades to work, the Doctor in hot pursuit after outwitting two witless guards.

As it turns out, Leo the Lion lied.  Color me SHOCKED!  The Eyes of Hades won't help her escape, but instead bring about an invasion!  Lady Me, by placing the Eyes of Hades on poor Sam Not-So-Swift (and killing him) has unleashed chaos and death on innocents, which she didn't want.  How to stop the invasion?  As it happens, Ashildr/Me has held on to the immortality device she had implanted by the Doctor, and she places it on Sam.  Portal closed, the Cowardly Lion is killed by the pride.  Me appoints herself watcher of all the Doctor's Companions, and we see her at the end, peering behind a fence when caught on a selfie by Clara (Jenna Coleman). 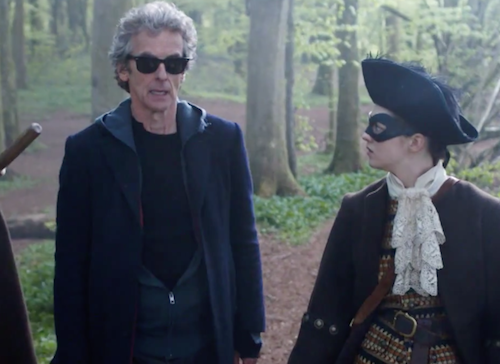 Ah, if only critics and Whovians bothered to examine some of what they declare brilliant?  Is it me, or is there something just a little cutesy with the name "Leandro" being that of a lion-type being?  I did honestly think at a certain point Williams and Bakare were going to break out into Beauty & The Beast given their outfits.  Was it strange that I burst out laughing when we saw the lion pop into this?

I think this was done to give The Woman Who Lived an alien/sci-fi element due to Doctor Who's stubborn refusal to do purely historic stories.  I think it would have been interesting to see Lady Me just be a highwayman and that she got caught, apparently executed, but either reviving (since she's immortal) or having the Doctor having to save her again.  Was Mufasa really necessary to this story?

I also really hated the editing, particularly when the Doctor and Lady Me (as idiotic and simplistic a name as can be created, again goading us to belt out The Sound of Music's Do-Re-Mi) were breaking into the house.  I also think Murray Gold can't control himself and thought the music at times was a bit too lighthearted for such things as the breaking-in of the mansion where the Eyes of Hades were.  You'd think there would be some more tense/dramatic music, but no, I thought it all a bit perky.

There were the usual leaps of logic (such as having a Wanted poster for The Doctor so soon after Sam Swift battled The Knightmare and her "father" in the woods...like Sam was going to tell the Keystone Kops of Merry Olde England, 'Oh yes, The Knightmare has her father "The Doctor" with her).

All that being said, The Woman Who Lived was at its best when it took things seriously.  It was wonderful seeing Williams bring a sadness and fury to her "Me", always living but living out what the Doctor said about immortality (it's not living forever, it's watching others die).  When Capaldi wasn't looking goofy with his sonic spectacles but appealing to the heart beneath the bitter woman or explaining why he opted not to bring her with him, again we see what good actors can do with their limited material.

Again, it is just so unfortunate that what good there was in The Woman Who Lived (and there was good in it) was buried by such nonsense as the Space Lion King and his quick invasion.  Well, I know so many thought this one of the many Citizen Kanes of Doctor Who, because ALL of them are so brilliant.

For me, it's time Doctor Who took a page out of The Wizard of Oz and get itself a little...courage.

Next Story: The Zygonic State Parts 1 & 2 (The Zygon Invasion/The Zygon Inversion)
Posted by Rick at 10:00 AM