The Woman Who Went on Amazon: Kerblam! Review 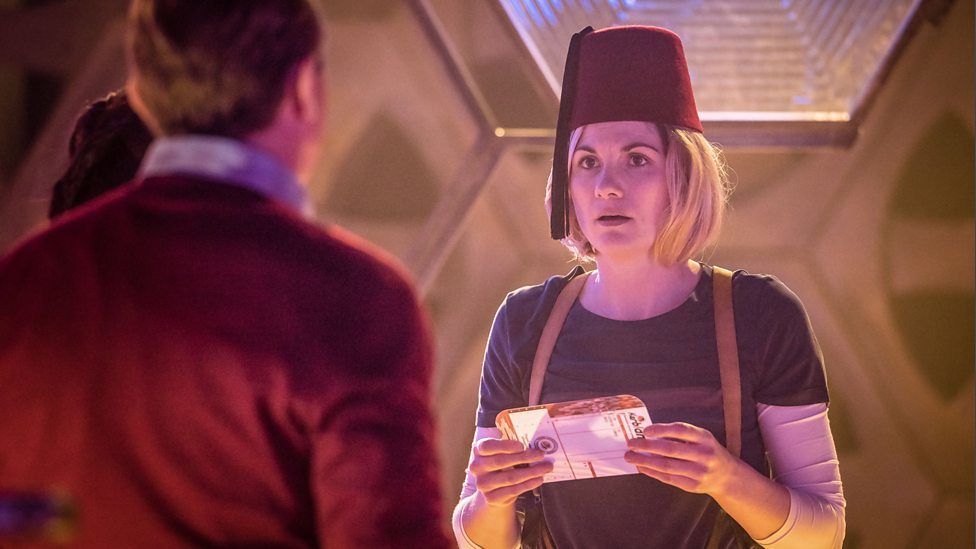 For better or worse, Doctor Who Series 11 is dead-set on coming up with thoroughly idiotic titles. We've had Arachnids in the UK, The Tsuranga Conundrum and the upcoming The Battle of Ranskoor Av Kolos. However, perhaps none of them are as stupidly titled as Kerblam!, complete with exclamation point. Kerblam! takes messaging to a strange and muddled level, deciding to take both sides and leaving the viewer with more than one eye-rolling moment.

The Doctress (Jodie Whittaker) is thrilled to receive a package from Kerblam, essentially Amazon in Space. The packing slip however has a simple message: "Help Me". With that, She takes her 'fam': Graham (Bradley Walsh), Ryan (Tosin Cole) and Yaz (Mandip Gill) to Kerblam's plant on a distant planet.

They soon split up and investigate on three different tracks. Yaz is on the main floor with Dan (Lee Mack), who has a daughter...so we know he'll soon bite the dust. Ryan and She are in the packing section where they meet eager and chipper Kira (Claudia Jessie). Graham, unceremoniously selected for 'Premium Maintenance' aka Janitorial, finds Charlie (Leo Flanagan).

It's clear that Kira and Charlie are quite fond of each other. It's also clear that there's nefarious business going on. Who sent for help and what are the roles of both Head of Humans Judy Maddox (Julie Hesmondhalgh) and Mr. Slade (Callum Dixon)? The truth comes out with more deaths, deadly bubble wrap and the unmasking of the only person capable of such evil.

Here's a hint: it's a straight white male.

Kerblam! has a very curious tone, simultaneously anti and pro-big business. Whether writer Pete McTighe intended it that way or not is unclear, but my guess is that he meant Kerblam! to bash the Amazon-type business model that is increasing profit at the expense of labor via automation. Kerblam! mentions that only 10% of the workforce is human and Charlie's motivation in his killing spree is to cause customers to blame the Delivery Bots so as to force more human workers.

Leaving aside the economic issues, Charlie's actual dastardly plot ends up making Kerblam! pro-big business rather than anti-big business. Charlie is probably a People Power Protest Movement member though that is not overtly stated as I remember it. Once word gets out that the Bots were framed, I don't think his group or ideology will get much support. Moreover, the fact that Charlie seems curiously undisturbed by the fact that he is going to kill humans and has been killing humans does not suggest he actually cares about humans.

I also should mention that the method of murder via popping bubble wrap is to me laughable. I know many Doctor Who fans express terror at the thought, but since I don't pop bubble wrap I would not be assassinated.

Kerblam! also deals in awful cliches and even makes a very odd suggestion about Her. The new group is told that climbing on the conveyors is grounds for immediate termination. What are the odds therefore that at some point they will climb on the conveyors?

When they do, Charlie falling off while attempting to high-five Ryan should go down as one of Doctor Who's most cringeworthy moments.

This setup in Kerblam! is one I found extremely curious. The company examines each humanoid and places him/her according to the machine's results for level of abilities. The Doctress uses Her sonic to switch places with Graham by changing their results. While She is sent to Packages, Graham is sent to Maintenance.

Therefore, if She had stayed where the machine had placed them, the machine found that She has the intellectual and dexterous level of a janitor. Again, leaving aside the rather snobbish suggestion that janitors/maintenance men are dumb the idea that She is somehow that low says more than perhaps Doctor Who wants to.

Personally, not only do I find it a pretty apt description but one that could have been played for laughs.

I actually thought well of the guest cast. Claudia Jessie reminded me a bit of Heather Burns' performance as "Miss Rhode Island" in Miss Congeniality, a generally sweet and upbeat person. It's a pity that Kerblam! decided to kerblam her. The scenes between Jessie and Flanagan were quite endearing even if we were not allowed a happy ending. Flanagan to be fair also managed to mostly switch between the sweet Charlie and the crazed human rights activist.

Kerblam! manages to do something I genuinely thought impossible: make Ryan more boring than Yaz. Following last week's Demons of the Punjab this is the second time Tosin Cole appeared so remote and almost incapable of acting. His line delivery is more robotic than the Delivery Bots.

Bradley Walsh is still the best thing about this series to where you wish he at least were the only Companion travelling with Her. Whittaker continues doing scrunchy-faces and bringing in the fez only reminds us that her portrayal of The Doctress is essentially a Matt Smith parody.

The fez does not suit Her and reminds us that protests to the contrary, She is not The Doctor.

Kerblam! has nothing going for it. It isn't clever or funny or witty or insightful.

Next Episode: The Witchfinders
Posted by Rick at 10:58 AM