The Woman Who Met a Pregnant Man: The Tsuranga Conundrum Review

I have returned to finish Her first series/season and the first episode is just so awful as to make one despair how things got to where they are. The Tsuranga Conundrum makes me think that Doctor Who showrunner Chris Chibnall is rather fond of oddball names. We've had Arachnids in the UK, this and future episodes titled Kerblam! (complete with exclamation point) and The Battle of Ranskoor Av Kolos, which oddly does not take place in Greece. The Tsuranga Conundrum really plays like a Doctor Who spoof, leaping on one bad decision after another to where you genuinely wonder if Chibnall is really working to get this series cancelled.

The Doctress (Jodie Whittaker) along with Her 'Fam' Graham (Bradley Walsh), Yaz (Mandip Gill) and Ryan (Tosin Cole) are on a junk asteroid when they encounter a sonic mine. Before you can say 'PTing' they find themselves on a hospital ship, the Tsuranga. Aboard the Tsuranga are two patients. There's Yoss (Jack Shalloo), a pregnant man. There's General Eve Cicero (Suzanne Packer), who is accompanied by her brother Durkas (Ben Bailey-Smith) and robot partner Ronan (David Shields). 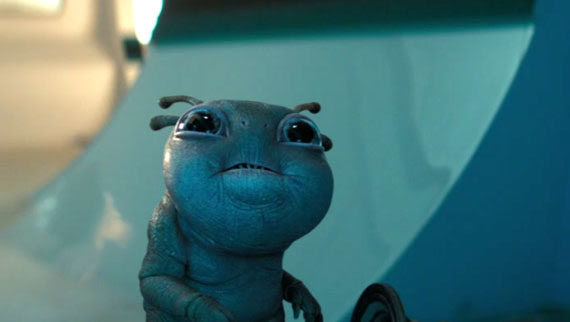 Before you can say 'PTing' the Tsuranga is under attack from a PTing, a tiny creature with a big appetite putting everyone in danger. Despite Her own pains The Doctress has to put things right. There are deaths and births until the PTing is discharged and the Tsuranga arrives to the main hospital in space.

The Tsuranga Conundrum is a whole mess of a mess, simultaneously packed and empty. Chibnall, who wrote this, decided it would be easier to leap about logic with wild abandon rather than think his way out of predicaments.

Take the opening for example. We start on this junk asteroid looking for...something. When we come across something that in theory should get them killed they then appear on the floating hospital because...reasons. To top that off, the TARDIS, left on that junk asteroid is quickly mentioned as the motivation for the Doctress to get off the Tsuranga but then the TARDIS is all but forgotten by the end.

In other words, unless specific mention is made in the next episode, how exactly She recovered the TARDIS will forever be left unexplained.

I figure that the PTing was created to sell toys. Either that or Chibnall is delusional if he thinks he can make something simultaneously cute and threatening. I burst out laughing the first time I saw it. I burst out laughing the last time I saw it. It was just so hilariously awful. It's here where I say 'bless the actors' for trying so hard, so terribly hard, to convince me that the PTing was some kind of dangerous threat. 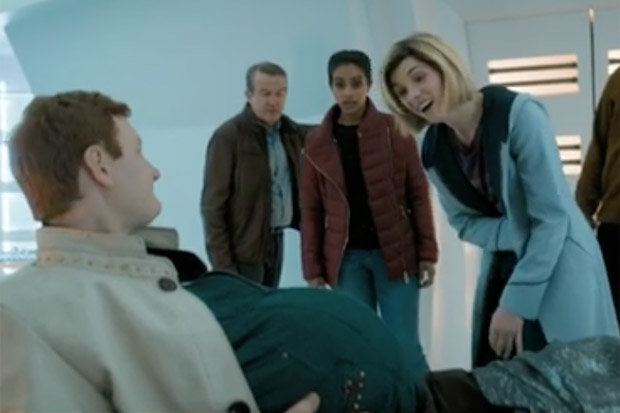 It's a sad thing when you feel sorry for these actors having to work with such rubbish. It's sadder still when they have to work with director Jennifer Perrott. She seemed unable to settle on a tone: goofy one moment, 'deadly' serious the next, sometimes in the same scene. While part of the fault here lies in the script, other elements clearly under her control showed her as shockingly inept.

Take for example what is meant as The Doctress' climatic speech about antimatter, itself an odd choice for such dramatic moments but whatever. For some reason known to no one Perrott opted to have a shot of Her hands waving about.

Why she opted to have a shot of Her hands...

Throughout The Tsuranga Conundrum Perrott opted to have lots of spinning camera work and a lot of cinematic flashes that end up nowhere and make things more confusing.

Everything in The Tsuranga Conundrum was stunningly bad. The Pregnant Man was superfluous to the plot save perhaps as the gateway to introduce Ryan's parent issues. At least there is logic to The Pregnant Man: his species is one where males give birth to males and females to females. I'm not sure exactly how that would work among the Gifftans (do males impregnate males and females to females), but there it is.

However, Yoss naming his child "Avocado Pear" in tribute to Ryan and Graham, meant for laughs, comes off as idiotic even insulting. I can see why Graham and Ryan worked with him: having Yaz and Yoss together would have been too confusing.

The performances were equally bad. Whittaker seems clumsy, clunky and inept as The Doctress, all jumbling and frenetic. Man or woman this version of The Doctor is so unbearably dumb and inspires nothing but fear that She is in charge. To be fair at least Gill improved to where she had something to do but it's sad that Walsh was relegated to sitting with The Pregnant Man.

I cannot feel for the guest cast because they were not on-screen long enough to have them do anything to make me feel anything for them. Lois Chimimba as Mabli the rookie nurse was good in her fear and slowly growing self-confidence in this crisis. However, whether Eve Cicero had 'Corton Fever' or 'Pilot's Heart' does not make me care.

I did like the score, which had a very Music From the Hearts of Space feel.

The Tsuranga Conundrum is rushed and hollow, with a laughable antagonist, bad efforts at jokes (the Hamilton comment was not funny, though hearing Durkas say "I'm a Cicero" reminded me of Chicago's Cell Block Tango).

It's not a Conundrum. It's a Fiasco.

Next Episode: Demons of the Punjab
Posted by Rick at 1:53 PM