The Woman Who Had A Frog In Her Throat: It Takes You Away Review 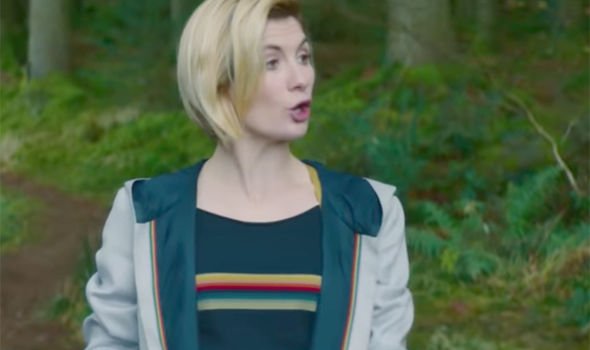 It's a sad thing when a talking frog is one of the less silly elements of what is meant as a science fiction/fantasy show, but It Takes You Away has such an awful inconsistent tone that one can only marvel at how comically bad it all is.

The Doctress (Jodie Whittaker) and Her 'fam': Graham (Bradley Walsh), his step-grandson Ryan (Tosin Cole) and hanger-on Yaz (Mandip Gill) are in 2018 Norway (She learns this by eating the grass or dirt, I'm not sure which). No sooner can you say 'Jump' before She gets them on a mysterious adventure.

A rotting old house holds Hanne (Ellie Wallwork), a young blind girl who is afraid of the monsters laying siege. "It takes you away", she cries out. Her father, Erik, moved them to this remote area after his wife Trine's death, but now he has disappeared and Hanne thinks 'they' took him away. Ryan suggests Erik just ran off but the others will help find him.

There's a mirror that does not offer a reflection, which is really a portal to a parallel world. Here, She discovers with Graham and Yaz an antizone, a place that separates two worlds that should not connect. In the antizone is Ribbons of the Seven Stomachs (Kevin Eldon), an alien who guides them for a price. Ribbons puts them in danger with the Flesh Moths, but they end up eating him before they find Erik (Christian Rubek).

They also find Trine (Lisa Stokke), apparently very alive and well. Things grow more complicated when Graham finds Grace (Sharon D. Clarke) also in this universe. This however, is not real, and She realizes they are in a Solitract, a consciousness that affects whatever universe it is in.

As Hanne manages to outwit Ryan, placing them both in danger in the antizone, She realizes this universe will collapse upon itself. It takes courage for Graham and Erik to see their wives are not real, something Hanne realizes immediately as her blindness masks the Solitract's deception. In the end, the Solitract, taking the form of a talking frog, releases the Doctress. Erik, now reunited with Hanne, decides to go back to Oslo and Ryan calls Graham 'Granddad' for the first time ever.

Again, Ed Hime's script I figure wants desperately to touch on the issues of grief and lost love, but a talking frog? Yes, I know the connection is Grace, who comments that she likes frogs, but the whole thing looks daft and ridiculous. I was laughing uncontrollably at what is meant to be a very serious, somber, moving moment. Whittaker's acting only made things more laughably bad, though to be fair there is probably no way any actor/actress could play a moving farewell scene with a talking tiny frog on a big white chair in a big white space.

That's the entire problem with It Takes You Away: it wants to be a quiet meditation on death, loss, grief and letting go but it keeps piling on the silly to where you can't take it seriously. It's so tonally bonkers as to be thoroughly unhinged.

Yes, the damn talking frog is the nadir of how wildly out-of-tune It Takes You Away is, but let's remember everything connected with "Ribbons of the Seven Stomachs".

The name can't be taken seriously. It's a debate as to which was the sillier part: 'Ribbons' or 'Of the Seven Stomachs'. Tim the Enchanter was more logical.
The character was pointless, attempting to add menace and danger but ending up as time-filler. You could easily have cut "Ribbons of the Seven Stomachs" out of the plot without it affecting anything. You could easily have introduced the Flesh Moths without Ribbons.

Adding to Ribbons' unintended silliness is the literal red light he carries like a balloon. You almost expect everyone to burst out into 99 Red Balloons. When Ryan carries it, you half-expect it to literally 'take him away'.

About the only good things in It Takes You Away were Walsh and the showcasing of the parallel worlds. In the latter, the episode did well in visualizing the fake world as light and sunny to the real world's gloom and darkness.

Walsh's performance elevated the episode due in part to his character having an actual motivation: Grace's loss. He mined the exploration of Graham's grief and the shadow hope of finding Grace again. Graham is also the smartest of the Companions: at an earlier point he comments how he always brings a sandwich with him on their journeys, having learned from experience that they might go a long time without food.

Tosin was again totally blank as Ryan, Gill even more so. Whittaker was hopelessly hampered by the script, which is dead-set on shifting The Doctress from wacky to serious without losing the wacky. Her eating the grass, commenting about "The Woolly Rebellion" (a future movement where sheep will overthrow humanity), going on about how She had 7 grandmothers but "Number 5 was my favorite" then adding how Granny 5 "also thought Granny 2 was a secret agent for the Zygons".

Only when She becomes serious, telling a wavering Graham, "It's her or the world. You can't have both" that a rare spark of sense creeps in. Perhaps if Doctor Who had opted to make Her more serious and drop the Matt Smith wackiness we could have been won over to a Female Doctor. However, the show's determination to have Whittaker essentially do a parody imitation of Matt Smith and David Tennant at their worst dooms her.

It Takes You Away is an embarrassment to everyone involved and a massive disservice to Bradley Walsh who did a smashing job exploring Graham's grief and loss.

Next Episode: The Battle of Ranskoor Av Kolos
Posted by Rick at 12:54 PM