The Woman Who Rang In the New Year: Resolution Review 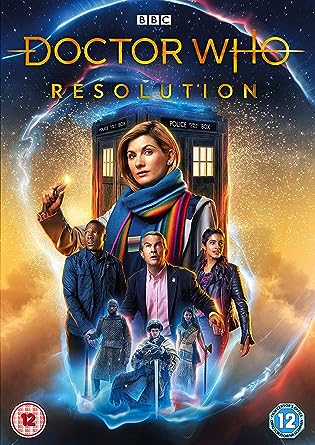 This year, Doctor Who opted for a New Year's Day special versus a Christmas Day special. As I understand it, the reason for delaying the special a week was that they'd essentially run out of ideas of how to tie Doctor Who to Christmas.

I think the first part is correct, for Resolution had nothing to do with New Year's. In fact, it had nothing to do, and not even the return of the Daleks could make it worth anyone's time, sober or hung-over.

We start and end with voiceover, we begin in the 9th Century where a massive battle has defeated 'a great evil'. It is cut into three pieces and sent to three far corners: Anuta Island in the Pacific, Siberia in the cold, and Yorkshire because...reasons. Unfortunately the Yorkshire pudding fell flat as he is killed before burying the third piece.

Moving to New Year's Day 2019, archaeologists Lin (Charlotte Richie) and Mitch (Nikesh Patel) are excavating under the Sheffield City Hall when they find the Yorkshire pudding. The seemingly flirtatious couple take the object the bones hold and put it under lights. Said lights revive the third part and manages to summon the other two parts from the South Pacific and Russian tundra to form a whole. 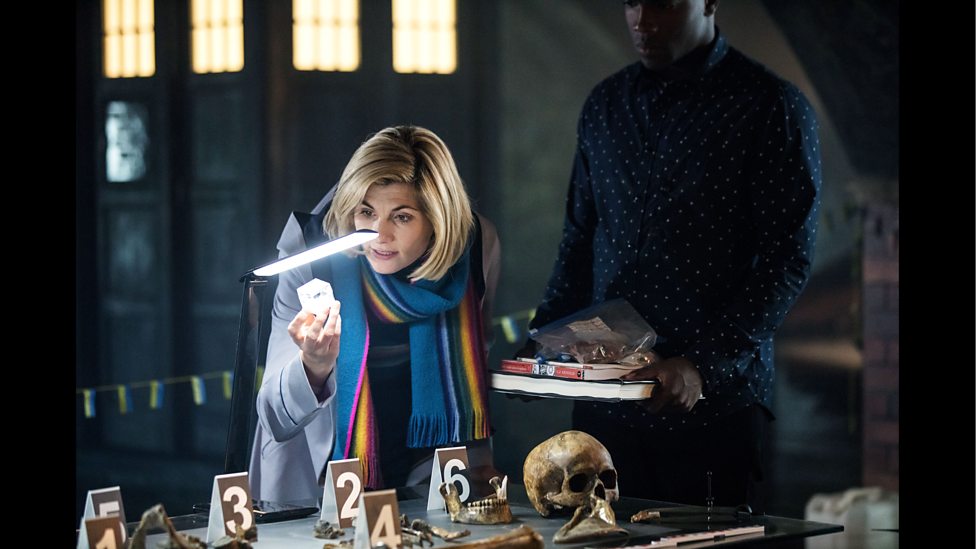 Fortunately The Doctress (Jodie Whittaker) along with Her 'fam' Graham (Bradley Walsh), Ryan (Tosin Cole) and Yaz (Mandip Gill) are alerted and go there. Unbeknownst to them though, the squid-like creature Lin saw has attached itself to her. Eventually we learn that said creature is a Dalek out of its casing.

It's a mad race to stop Lin/Dalek from ravaging the Earth. We do have to pause every so often to deal with the domestic situation Ryan and Graham face: that of Ryan's father/Graham's stepson Aaron (Daniel Adegboyega), who has come to reconcile with his son. Eventually the Doctress defeats the newly-encased Dalek, Aaron, saved from getting sucked into a supernova by Ryan declines a hop on the TARDIS, Lin and Mitch can continue their thwarted romance and The Doctress and Her 'fam' can keep on traveling.

I cannot imagine why Resolution has such high positive reviews. It was worse than bad. It was boring. Chris Chibnall seemed even more determined than usual to double-down on every bad decision he could think of and probably come with a few more to boot.

In particular is what he has done with The Doctor. She isn't 'wacky' but stupid, perpetually stupid. "Hi, Ryan's Dad", she first states when introduced to Aaron. This is something Matt Smith's Doctor would do, with diminishing results. However, for reasons only Chibnall may know he keeps having Her do that. Why can She not call him 'Aaron' or even 'Mr. Sinclair'. She keeps panicking when hearing a doorbell and keeps asking if it's an alarm.

Has She never heard a doorbell before? Is She that inept?

I cannot take Her seriously when She communicates with a terrorized Lin via a large old-style microphone. Did he or anyone at the Doctor Who production think this was remotely funny?

Even the parts Chibnall imagined were funny were anything but. There's a brief bit where a family finds their Wi-Fi is cut off. "I suppose we'll have to have a conversation," the mother says despairingly. "WHAT?" the two boys reply. This is really, really dumb and nowhere near as funny as Chibnall thinks it is.

We even get some good old virtue signaling and political grandstanding that show Doctor Who has gone way off the deep end when it comes to placating the Social Justice Warrior mob it caters to. There's a 'funny' bit where She cannot get in touch with UNIT because of "financial disputes and subsequent funding withdrawal by the UK's major international partners". Why Chibnall decided Resolution was the best place to put in a snide Brexit comment I don't understand.

In the similar vein, why the Security Guard that Lin is forced to kill offers this strange woman he's never met and whom he should remove from the vicinity that he has a boyfriend is also just sad virtue signaling.

Over and over, Resolution makes the case that Doctor Who just is tired and deciding to be a more woke show with nothing to offer. Perhaps even that could be accepted if not for how bad things are.

"These are my serious tech skillz, and yes that is with a zed", The Doctress tells the Dalek. Not only is that an absurdly stupid statement, but is delivered so badly.

The plot is a mess, more a Venom/The Mummy ripoff than a serious story mixed in with bad domestic drama that stops the action cold. Moreover, who decided to have voiceover? Why sideline Walsh's Graham for much of the episode? Why did the score pound the 'tension' and slip into a bad 007 parody? Why introduce 'The Order of the Custodians', these fabled protectors of the separate monsters that never played a role in Resolution?

Also, 'Order of the Custodians' sounds like a janitorial union, and the idea that the South Pacific and Siberian custodians did not know what happened to the Sheffield one is laughable.

Personally, I would have preferred Lin and Mitch to be Companions and dump the boring and useless Ryan and Yaz. At least the other two had semblances of a personality.

There is a Resolution that I may keep: I resolve to not watch another Doctor Who episode because now it's just boring and pointless.