Doctor Who Story 034: The Macra Terror 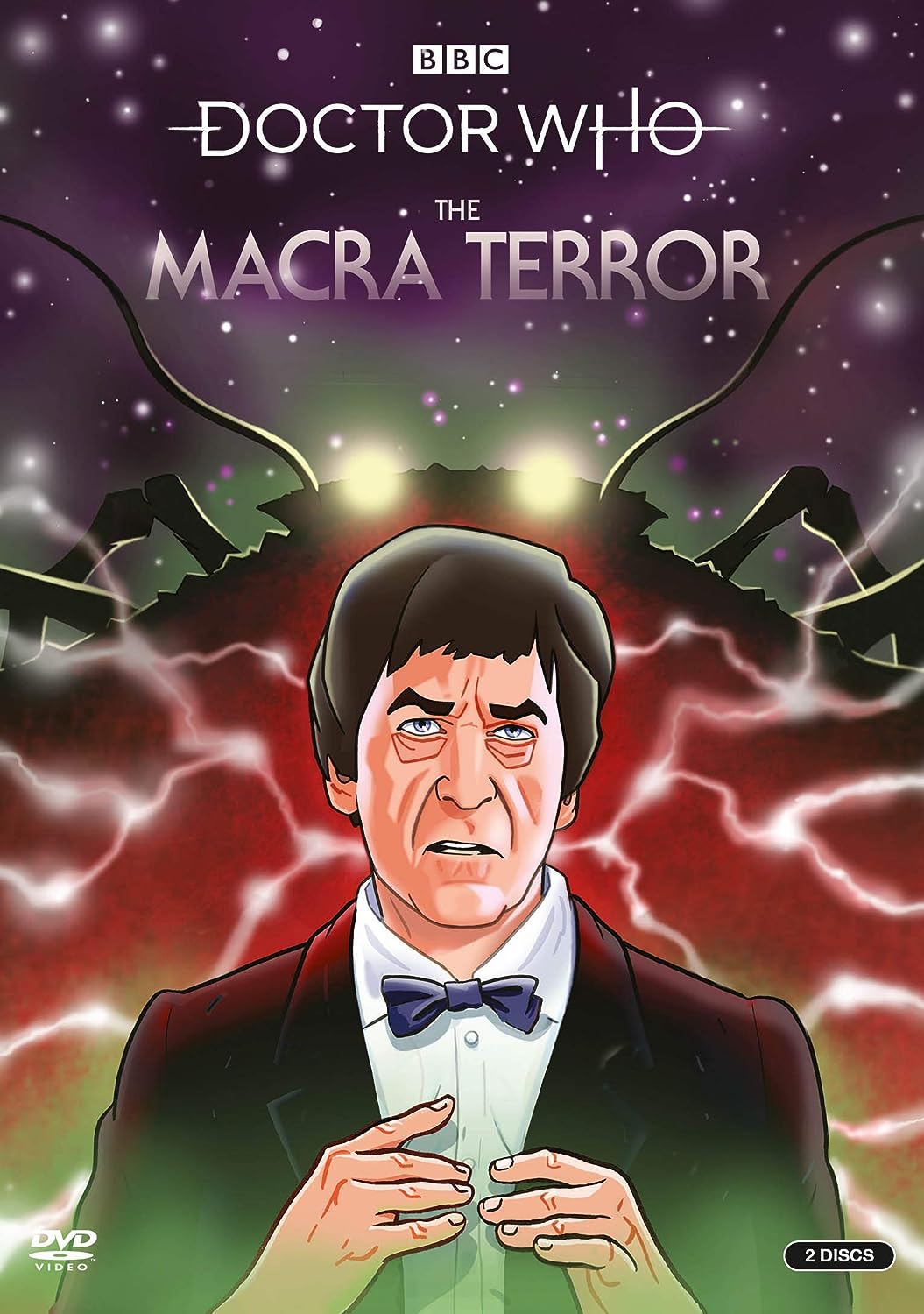 As of this writing no complete surviving episodes from the Second Doctor story The Macra Terror are known to exist. As such, we have the animated reconstruction of the four-part Doctor Who story and while it is unlikely that The Macra Terror will ever be found, the animated version does show that at heart, Doctor Who had a very inventive premise. The Macra Terror opted not to stick with a "pure" reconstruction to make it look as it would have when first broadcast, but instead opened it up to a more creative adaptation that elevates it.

The Doctor (Patrick Troughton) and his Companions Polly (Anneke Wills), Ben (Michael Craze) and Jamie (Frazer Hines) arrive in a seemingly happy and content Colony. The workers are not only happy but are encouraged in their happiness by their Controller, whom they see only via large-screen. Underneath this happy land full of content workers who know The Colony is always right, something sinister lies.

One of the formerly content, Medok (Terence Lodge) insists that there is an evil thing controlling all: The Macra, a name that is verboten in The Colony. The Doctor is the only one of the strangers to think Medok is not either insane or dangerous. His digging for the truth uncovers a shocking terror under the literal bowels of this world, but Ben has fallen under the Controller's control and turns informant and traitor.

As the Doctor, Polly and Jamie keep searching for the truth, with only the ruling Pilot (Peter Jeffrey) as a semi-ally, they must both find the truth while stopping the Security Chief Ola (Gertan Klauber) from stopping them. They discover the truth of what lies beneath: the Macra Terror.

As we have no surviving episodes and only a few clips from The Macra Terror, it is hard to say how good or bad the performances are given that we have only their voices. However, judging from the voices I would argue that Wills was the weakest, forever whimpering and screaming. I cannot fault Wills alone in all this given that Ian Stuart Black's script gave her nothing to do but whimper and scream.

Much better were Craze and Hines. Craze unfortunately disappears for long stretches but when he is on screen struggling between his subconsciously-induced loyalty to The Colony and his loyalty to the Doctor and his fellow Companions he makes the most of it. Hines is made the action hero, particularly in Episode Three and Four where he must go in the "forbidden area" to find where the mines go down to. Hines is even allowed a brief moment of humor when he has to break out into an impromptu dance to try and get out of something.

One can question why in such a serious moment we had our Highlander break out into a jig but there it is.

Troughton fully owns the part, for his Doctor is a man full of confidence in his own abilities and not afraid of question authority. Despite being the oldest of the cast his character is closest to the feels of the late 1960's, forever making jokes at the leadership's expense. Whether it's answering Polly's inquiry with "Confusion is best left to the experts" or insisting "Bad laws were made to be broken", his Doctor is a rebel.

As he almost merrily destroys the method the Colony uses to subconsciously control the Colony workers, the Doctor tells everyone within earshot, "Better some damage than the loss of willpower".

The Macra Terror it appears draws heavily from H.G. Wells' The Time Machine and L. Frank Baum's The Wizard of Oz in its story of monstrous creatures secretly controlling a seemingly pleasant and benevolent society. The giant face of the Controller whom we find is really a broken old man terrorized into submission by the Macra can be seen as a "Wizard of Oz" type figure. The underground Macra essentially feeding off the controlled Colonists are similar if not exact to the Morlocks in Wells' story.

However, for my mind, The Macra Terror is closer to allegory, or perhaps this is what I got out of it. The benevolent society where "The Colony" and "The Controller" were never questioned, which were seen as the source of all good, where happy music piped in to cheer the joys of working for The Colony seems to be what a state like North Korea or the then-Soviet Union want/wanted their people to think. Like Communist states, the Colony appeared to be a place of joy and bounty when in reality it was a prison.

Those who spoke the name "Macra" were routinely sent to hospital for "correction" and if that failed, off to the pits. Even after Ben clearly sees the Macra and saves Polly from them, he later insists there was nothing there. This is close to a fascist police state with the veneer of happiness.

Granted, I may be drawing too much from the story, but it's hard not to imagine that The Macra Terror may not at least work as allegory on the evils of a seemingly idyllic but in reality a totalitarian state. 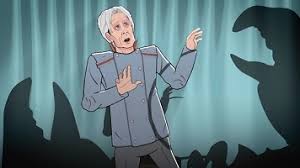 In terms of animation The Macra Terror outdoes the live-action surviving footage. For example, in the few surviving clips, Polly's ankle is what is attacked by the Macra. The chance for animation allows for a greater and more intense sequence where Polly is literally hanging upside down from the Macra's claws, screaming for her life. There are visually impressive feats, such as when we see through a clear chalkboard as the Doctor works out his calculations.

There are probably one or two questions The Macra Terror does not answer. How do these crab-like creatures communicate? How does Ben's mind control ease off so quickly. It almost feels as if the end came about rather quickly. However, all these are minor points.

I found The Macra Terror quite intelligent and well-animated, with an engaging story that works quite well. Some of the acting was not the best but on the whole there isn't much to be crabby about The Macra Terror.

Next Story: The Faceless Ones
Posted by Rick at 5:21 PM