Doctor Who Story 012: The Romans 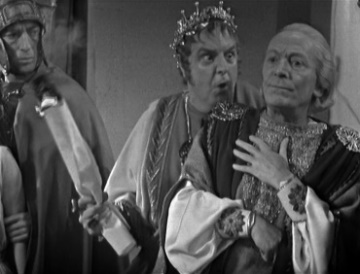 A Funny Thing Happened On the Way to the TARDIS...

It might have come as a shock to Doctor Who fans to see the four-part story collectively known as The Romans (individual episodes The Slave Trades, All Roads Lead to Rome, Conspiracy, and Inferno--not to be confused with the Third Doctor story also called Inferno). It isn't because it's a historic piece: we've had two already (Marco Polo and The Aztecs). Rather, it's the fact that it veered toward comedy...a Roman farce, if you will. After ten adventures that, while having some humor in them were mostly adventures, and some quite dark, The Romans is remarkably light and comedic (especially given some of the elements within The Romans). That isn't to say the crew: The Doctor (William Hartnell), Ian Chesterton (William Russell), Barbara Wright (Jacqueline Hill), or the newest companion, Vicki (Maureen O'Sullivan) didn't face dangers. On the contrary: most of The Romans involve them either getting into or out of threats to their lives, but they for the most part are done in such a deliberately funny way one can't help getting swept into the funny form The Romans takes.

The travelers, after having survived the TARDIS falling off a cliff, have been enjoying a respite in a Roman villa for about a month. While Ian and Barbara have been enjoying staying put for a spell the Doctor and Vicki want to go beyond their villa (which they are temporarily occupying while the real owners are away). The new visitors attract the attention of a couple of slavers, who become intrigued with these people from 'Londinium' in far-off Britannia. The Doctor, reverting to his short-tempered, irritable, and crotchety manner, decides to go to Rome and agrees to take Vicki with him. Thus they leave before the slavers seize Ian and Barbara, who themselves are split up respectively between a slave galley and, after a slave auction, at the Court of Emperor Nero himself (Derek Francis). As it turns out, The Doctor is mistaken for Maximus Pettulian, a noted lyre player who has been summoned to entertain at Nero's Court. Tavius (Michael Peake) who bought Barbara to be a handmaid to the Empress Poppaea (Kay Patrick), is overjoyed to see Maximus/Doctor at Court, since he is involved in a conspiracy of which The Doctor is clueless about, as he is about playing the lyre. Ian, having escaped with fellow prisoner Delos (Peter Diamond) when their ship is destroyed in a storm, decides to make for Rome to rescue Barbara. He is recaptured and made to train as a gladiator, and after the Emperor and Empress become displeased by the antics of the travellers, they decide to take revenge, but not before the Doctor gets inadvertently involved with the Great Fire of Rome and after a lot (and I MEAN a lot) of near misses the two groups manage to reunite with their travelling partner and return to their villa without knowing of the other pair's adventures.

The Romans starts off with comedy and never really lets up. The source of the comedy comes primarily through the dialogue of Dennis Spooner's script. Take, for example, in Episode 1. The Doctor goes back to mangling Ian's last name. This is the dialogue:

The Doctor: Chesterfield...
Barbara: Chester-TON.
The Doctor (to Ian): Oh, Barbara's calling you.

Same episode, when the Centurion (Dennis Edwards) questions the Doctor while he and Vicki are travelling to Rome:

The Centurion (pointing to the lyre the Doctor is holding): Is that your lyre?
The Doctor: Why? Have you lost one?

Finally, when referring to Vicki, the Doctor informs the Centurion, "She keeps her eye on all the lyres", much to her somewhat suppressed laughter. There's more pun-fun in Episode 4. The Doctor discovers Nero's plans to throw him to the lions (literally), and instead of showing fear, he shows his wit. He tells Nero that he expects his 'concert' at the Coliseum to be a "roaring success", even if it is to be his "farewell performance". He continues teasing Nero (who has no idea that The Doctor is aware of his scheme) by telling him he "always wanted to be considered as an artist of some taste" and be "generally regarded as, well, palatable" (emphasis mine and his).

It's this word-play that keeps the lightness going, as does the antics in Episode 3. Here, we have the classic 'chasing down the halls' bit, where the lascivious Nero pursues Barbara with naked abandon, right down to chasing her round and around his bed. In the same episode, as Barbara & Nero run around the halls, the Doctor and Vicki keep missing her, and there's more hilarity with the Doctor and Nero while in a steam room and at Nero's banquet. All the comedy bits don't distract or weaken the more serious aspects of The Romans. We get glints of this in the slave auction and the imprisonment of Barbara and Ian. When the story requires a more serious tone, it delivers, and it's a credit to director Christopher Barry that we never get short-changed. When, for example, the minor character of Tigilinus (Brian Proudfoot) is killed, it would have been quite shocking, but since it was done in a somewhat light-hearted way, we aren't as horrified as we should be.

The guest stars are excellent. Throughout the story, we wonder if Tavius is villain or hero, and Peake, with his gravelly voice and stern face, has us guessing all the way to the conclusion. The best performance is that of Francis as Nero. As I understand it, Francis was known to British audiences as a comic, and here he is quite hilarious, as when he attempts to make Barbara his newest mistress. However, he also brings quite a menace to Nero, whenever he threatens or acts upon his violent desires with no sense of guilt. Take for example Episode 4, when he stabs one of his guards for being 'too slow'. Nero is quite a monster, and Francis manages to show him as both childish and deadly. Patrick's Poppaea is by no means comic, but rather sinister mixed with a bit of irritation and vanity, though she also has some humor to her, as when she can't quite decide which bracelet to wear.

This is the first full story with O'Sullivan's Vicki, and here, she's not the central figure as she was in The Rescue. She at times did irritate with her gleeful jumping at the prospects of going to Rome or meeting Nero himself, but given that she was playing someone with a more innocent worldview that can be forgiven. Russell has to continue to be an action hero, and while he doesn't disappoint (both as a galley slave and a gladiator) he almost seems an afterthought. This probably is because he is separated from the others for three episodes. Hill has fun being chased about by Nero, but she manages the darkness of being sold with great grace and dignity, as also when she tends an ill fellow prisoner. Hartnell, I think, has the most fun. Here, he has a bit of the crankiness in Episode 1, but for the rest of the story he has an almost constant maniacal laugh, especially when he reflects that he may be partially responsible for seeing Rome go up in smoke. A side note: the part with Nero ends with the image of the Emperor playing his lyre while Rome goes up in flames, which may not be strictly speaking historically correct but which is beautifully filmed. A final credit should be given to Raymond Jones' score, which clues you in that this Doctor Who is lighter, funnier than was the usual fare.

From what I understand, there are Who fans who object to The Romans BECAUSE it is more comic. I disagree: I think there is nothing wrong with taking Doctor Who to a more comic turn, and given that we've gone through some very dark/sad stories (The Daleks, The Dalek Invasion of Earth), it's a nice change of pace. In short, there's nothing wrong with being able to have a laugh, to have FUN. The fact that The Romans manages to get a lot of humor and to hold up logically makes for good, solid entertainment. To all Roman haters, I say Viva La Roma!

Next story: The Web Planet