Our Friend From The North 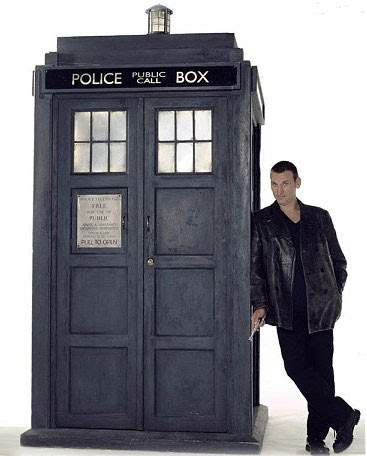 That's a remarkably nice-looking, almost pleasant fellow by the TARDIS, a bloke you could go to the pub with. Given his reputation for being cantankerous (a trait also familiar to The First Doctor William Hartnell) it isn't a giant surprise Eccleston stayed on Doctor Who for only one season. With the exception of Paul McGann, who appeared only once as The Doctor, this will make Eccleston the shortest-serving Doctor in the franchise's history*, and he left by choice. Granted, I think it's an odd choice, but it's his career. If he thought G.I. Joe: The Rise of Cobra was a better use of his talents, more power to him.
Given that, he still WAS a Doctor, and as such should be accorded all respects and honors due to him. I've reviewed a few of his stories and will write on all of them, not just Eccleston's but his successors David Tennant and Matt Smith. The next review will be for Story 164: ALIENS OF LONDON (Aliens of London/World War III).
Story 161: Rose
Story 162: The End of the World
Story 163: The Unquiet Dead
* Eccleston's Doctor had 10 televised stories while Sixth Doctor Colin Baker had 11 stories. Since I count two-episode stories as ONE story, the two-part stories ALIENS OF LONDON (Aliens of London/World War III), THE EMPTY CHILD (The Empty Child/The Doctor Dances), and BAD WOLF (Bad Wolf/The Parting of the Ways)count as one and knocks the total from 13 episodes from Eccleston's Era. Also, while many count Colin Baker's season-long The Trial of A Time Lord as ONE STORY with 14 episodes, I count them as FOUR STORIES (The Mysterious Planet, Mindwarp, Terror of the Vervoids, and The Ultimate Foe). Even going by individual stories, Colin Baker lasted longer than Christopher Eccleston, so in either count it would make the latter the shortest-serving Doctor. McGann's reign was shorter, but it was not for a season but for one television movie, so his case is unique.
Posted by Rick at 4:25 PM