Doctor Who Story 011: The Rescue 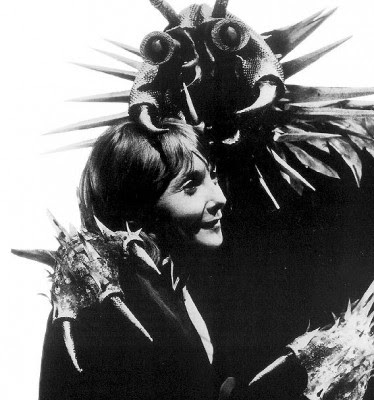 A Vicki of Circumstance...

The Rescue is an important story in this sense: it established how a new Companion should be introduced. It also is a short story with two episodes, The Powerful Enemy and Dangerous Measures. Side note: if I were to follow the revived series idea of calling two-part stories by both titles (ie. The Pandorica Opens/The Big Bang), we COULDN'T call this story The Rescue but would have to call it The Powerful Enemy/Dangerous Measures. Since we don't, I elect to call post Survival stories by ONE title, period (ie. THE BIG BANG). Yet I digress. Above all else, The Rescue is a good, strong story, one that moves quickly, has remarkable effects for 1964, and gives a genuine twist that is for the most part logical.

The crew of the TARDIS lands inside a cave. The Doctor (William Hartnell) soon realizes he's been this way before: it's the planet Dido, home to a small community of peaceful beings. This, however, isn't the experience Barbara Wright (Jacqueline Hill) or Ian Chesterton (William Russell) have. They are menaced by a strange monster, and this same monster, known as the Koquillion, has been menacing two survivors of a spaceship crash, Vicki (Maureen O'Sullivan) and Bennett (Ray Barrett). The Didonians have apparently been killed off, apparently at the hands of Koquillion, and Vicki and Bennett are waiting for a rescue ship. Vicki mistakes the TARDIS crew for their rescuers, but Bennett has a secret or two of his own...

In the space of one hour, The Rescue packs a great deal into it without short-changing the story or the audience. This is the result of Christopher Barry's strong directing and David Whitaker's intelligent script. Barry brought extremely impressive visuals to The Rescue: for example, in Episode 1 when Barbara & Ian look on the crash site it is one of the few times in early Doctor Who when the special effects didn't look fake but were integrated extremely well. This is also true of the end of Episode 1 and beginning of Episode 2, when Ian and The Doctor are close to falling over a ledge and into the den of a Sand Monster. The two levels were mixed in beautifully to where one could really imagine both were in the same space. The Rescue may be a simple story, but it is not told in a simple way.

There is a strong rapport between the cast (a total of five speaking parts--try getting that in any other Doctor Who, especially the revived series). This is clearly O'Sullivan's show as The Rescue basically serves as a showcase for Vicki. She handles the role extremely well: O'Sullivan creates someone who is sweet, innocent, almost a child in her vulnerability. When she has the truth of the crew's time travel she finds it all so hilarious, and her genuine disbelief at all that is brilliant. Her scenes with Hartnell are beautiful in their tenderness and gentleness. Hartnell has a reputation of being difficult on the set and crotchety as The Doctor, but watch when he and Vicki talk. Hartnell never fails to treat her on screen as a kindly old grandfather figure. He has a delicate touch with Vicki, and it belies the view that his Doctor was almost always bad-tempered.

Speaking of Hartnell, throughout The Rescue he is in top form. As stated, he is gentle when he needs to, but when he faces off against The Koquillion, he can be menacing, threatening, even dangerous. There is also a hint of sadness and a quiet inability to resign himself to the loss of Susan. In Episode 1 he asks 'Susan' to open the TARDIS door, but soon the crew realizes his mistake. No one speaks, but his face expresses sadness, confusion and embarrassment in a short moment. Barrett makes his Bennett gruff, unlikeable, which is exactly what he needed to be, especially when we discover his own secrets. Hill and Russell both have their moments: Hill when she inadvertently kills Vicki's pet and Russell when he faces the Sand Monster.

The Rescue even manages a bit of comedy. When Vicki learns that Barbara and Ian are from 1963, she figures that in a way, they are both well over 200 years old. Barbara especially does not like the idea that Vicki is, in a roundabout way, correct in her estimation of her age and her expression is priceless. Thanks to Barry's strong direction, there was never an uneven balance of drama/suspense and comedy/tenderness.

The only real flaw in The Rescue is at the very end. The Koquillion and The Doctor face off in the People's Hall of Judgment (very Communist sounding to me, but I digress), which looks like some sort of underground temple. Just when the Koquillion is about do the Doctor in, two men native to the planet (Didonians I suppose they would be called) come out of nowhere to take care of things. Given that we have been led to believe Didonians were extinct and that we've had no indication that any of them survived, this seems like a convenient cheat. Where they did come from? Where were they all this time? It made no sense and I object strongly to this. It ruins the logic of The Rescue, and given the twist (which is a genuine surprise as well as making perfect sense), it goes one too much to believe.

However, as it stands, The Rescue is a sharp, intelligent story which doesn't drain us. With Vicki on board we have a strong replacement for the teenage role in this 'family', and it is above all, a happy ending. "If you like adventure, my dear, I can promise you an abundance of it!" the Doctor tells Vicki when she is offered the chance to join the TARDIS crew. That is something that could be said to any future Companion as well as to us the audience.

Next Story: The Romans