The Quality of Mercy of The Doctor 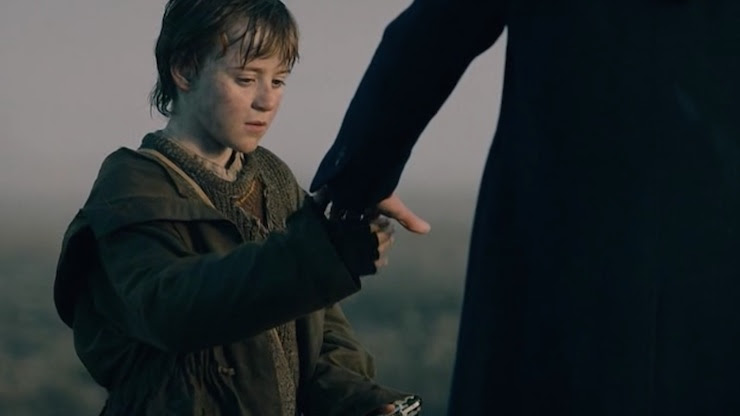 Poor Davros.  All he really wants is to see one last sunrise...and destroy The Doctor.  The Witch's Familiar, the second part of a two-part story I'm calling Davros' Revenge, goes through the motions one more time.  It isn't just Steven Moffat's tropes of a.) going to a character's childhood (we've seen so far, the childhoods of The Master, The Doctor, Amy, Rory, River, Clara, and now Davros), b.) the idea that 'love' conquers all (the villain really isn't a villain, at least for most of the episode), c.) a far-too-convoluted resolution to the 'the characters really didn't die' business (and the idea that characters don't ever die at all), d.) everyone pretty much being ahead of everyone else and e.) throwing continuity out the window by contradicting something that came before (in this case, something which came decades before and which was already established Canon).

While all of that is already difficult to overlook, the fact that Moffat threw away a really good idea that actually had me intrigued for part of The Witch's Familiar is what makes this another sad, sorry disappointment in Doctor Who history.  No wonder people preferred watching Rugby.

The Doctor (Peter Capaldi) is enraged at Davros (Julian Bleach) has harmed the Doctor's Companion Clara Oswald (Jenna Coleman).  So enraged that he tosses Davros from his life-support wheelchair (in a style that makes Blofeld's exit in For Your Eyes Only seem subtle) and threatens the Daleks until she is returned.  Clara, meanwhile, is with the transgendered Master (Michelle Gomez), who takes her to the Dalek sewers.  These sewers are also the Dalek graveyards of decaying/insane Daleks, and the ever-crafty transgendered Master gets a Dalek to fall into her trap.  She gets Clara Into the Dalek and pretends to be that Dalek's prisoner.

Clara discovers what the transgendered Master has known all along: the familiar Dalek cry of "EXTERMINATE!" is really the Daleks reloading their weapons, by channeling their emotion into their guns.  This is why when Clara says "I love you", it comes out "Exterminate". 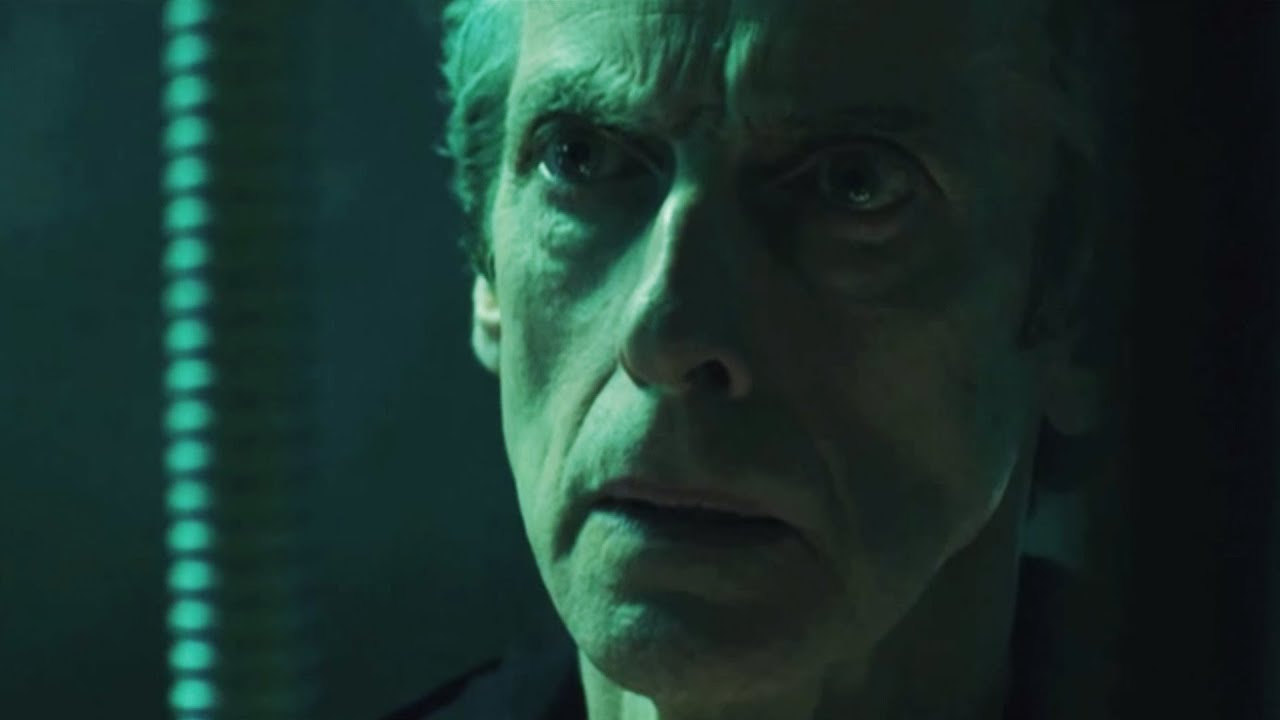 Now the Doctor and Davros begin playing a game of cat-and-mouse, but a most curious one.  Davros, on death's door, now has apparently regrets about what he's done.  As he lays dying, he wants to see the sunrise, just once more, with his own eyes, and asks the Doctor if he was "a good man" (the same question the Doctor asked of Clara last year).

The Doctor, moved by compassion, offers a little regenerative energy to Davros to allow him a last glimpse of Skaro's sun.  The Doctor connects himself with the cords that have kept Davros alive and gives a little of his energy, but this was all part of Davros' evil scheme.  He wants to use the Time Lord's regenerative therapy to revive not just himself, but all the Daleks.  The Doctor may be that long-prophesied Time Lord/Dalek hybrid people have been talking about for centuries, which might have been why he ran away from Gallifrey all that long ago.

As a side note, I admit I missed all the episodes between Smith & Jones and The End of Time, but when did this prophesy pop up?  I also missed the episode where we find The Master had a daughter (and in my only snippy remark, wonder if that daughter's name is Kendall or Kylie).

Well, the regenerative energy spreading about and the transgendered Master coming in to save the day, we discover that the Doctor knew of Davros' plans all along.  His energy hasn't just awoken all the Daleks on the surface, but those in the sewers, who now are going to battle the living Daleks.

It's Night of the Living Daleks!

In the chaos, The Doctor stumbles upon the transgendered Master and that Dalek tottering behind.  The transgendered Master tells the Doctor that Clara is dead and that the Dalek in front of him killed her.  The transgendered Master urges the Doctor to kill this Dalek, who can't tell him she's really Clara!  It is only when the Dalek begs for mercy that he realizes something off.  He tells the Dalek to open up, and out pops Clara.  They flee the crumbling Dalek world in the TARDIS, which wasn't destroyed thanks in part to the Doctor's new sonic spectacles.  The Doctor has one more task to perform: he goes back to the childhood of Davros, and exterminates...the hand-mines, thus giving Little Davros the inspiration to instill a touch of mercy to the Daleks (and which allowed the Clara Dalek not to fire on him). The Mistress is left behind, and now it's off to something else.

Ah, I feel like that lonely voice in the wilderness, because I'm one of the handful that isn't lavishing praise on The Bitch's Familiar.  Yes, I know it's "Witch's", but given The Mistress did say to tell Davros that "the bitch is back"...

The Witch's Familiar delights in going against Canon, of contradicting what has gone before.  In Resurrection of the Daleks, Davros makes very clear that he hasn't installed anything close to mercy.  In fact, if he had it his way, he'd do so only to enhance their killing abilities, not to make them soft in any way.

How now to reconcile a thirty-year-old story with The Bitch's Familiar, which technically speaking takes place long before Resurrection?  One story says no mercy was installed, another says it was.

If I'm accused of being nitpicky regarding how I hold that Bitch's Familiar contradicts Resurrection of the Daleks, of how I can't go along with change, of romanticizing Classic Who, I offer this piece of evidence of Moffat's inability to keep consistency: Asylum of the Daleks, written by Steven Moffat (the same writer of Davros' Revenge).

In Asylum, we see and hear very clearly and unequivocally that Oswin was able to say "I am human" in a Dalek voice.  "I am not a Dalek", she is able to say...even though she IS a Dalek.  She is able to say "I'm human".  She is able to say that quite clearly, with no difficulty.  Now, in Witch's Familiar, Clara, the authentic version of the Oswin that was created when she jumped into the Doctor's timestream to save him again and again, CAN'T say "I am not a Dalek" or "I'm human".  Instead, we're suppose to believe that anything the Daleks say regarding such things gets automatically translated into something else.  In this case, saying "I am Clara, I am human" gets changed into "I am a Dalek".

Why then didn't Oswin's declarations that she was human not get translated into "I AM a Dalek"?  She was able to state "I AM HUMAN!  I AM NOT A DALEK!" in Asylum of the Daleks, but in Bitch's Familiar, Oswald couldn't do what Oswin could despite Oswald NOT being a Dalek and Oswin BEING a Dalek.

Let's see someone use 'timey-wimey' to explain that!

Look, I'm going to flat-out state something here in counter to those who say such nonsense as "Doctor Who isn't suppose to make sense..." or "Alternate timelines...." or even "It's just a TV show.  Enjoy it and don't think about it".  No program should be excused from making sense, period.  Good sci-fi/fantasy/comic book shows (from Firefly to Buffy the Vampire Slayer to Gotham or The Flash) would never so openly, nakedly, and gleefully contradict themselves from season to season the way Doctor Who does.

Imagine for example if Mal Reynolds in one episode quoted the poem Kubla Khan and then another episode he said he'd never heard of it.  If it was for comic effect or in a fit of amnesia, then that at least offers a logical explanation.  However, if Reynolds said "Xanadu? What does Xanadu mean?" a few episodes after he stated, "In Xanadu did Kubla Khan a stately pleasure dome decree...", you'd wonder why the inconsistency.  You might even call Firefly on that.  You might say, "How can he know this poem one episode, then not know it in another without explaining how to reconcile the difference"?

Doctor Who on the other hand, consistently and constantly gets excused from keeping a procedural narrative, all based on the idea of 'timey-wimey' (that stories don't necessarily follow each other) or that 'time can be rewritten' (meaning things that happened before can be changed from episode to episode at whim).  These two turns of phrases curiously are from The Moff, I believe.

My point is this: in at least two stories, one Classic, one Revived, something was presented that has now been contradicted by Bitch's Familiar.   Quibble about how Davros, who supposedly has met the Doctor in his childhood and was inspired to install a touch of mercy in Daleks, in the future actually complains that his mistake with the Daleks was in making them 'totally ruthless' which precludes any sense of mercy (Resurrection of the Daleks).  However, how can one reconcile that in Asylum of the Daleks, Oswin could state she was 'human' despite being a Dalek, while in Bitch's Familiar Oswald could not state she was 'human' despite not being a Dalek? 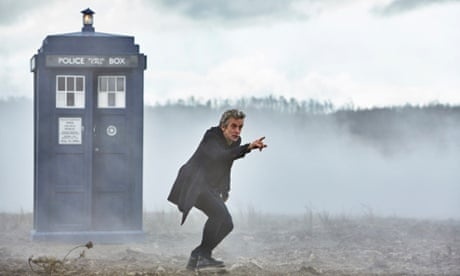 Another point on logic and consistency.  Even if I accepted the 'alternate timestream' business (which I don't), why didn't The Doctor just zap the hand-mines to begin with rather than have us go through all this?  Further, I find it hard to believe that Davros as an adult would so quickly forget that he's clearly seen the TARDIS and when reencountering the Doctor in other stories (particularly, Genesis of the Daleks), he couldn't put two-and-two together.

Oh, and yes, since The Master had his sex-change, why would The Mistress tell anyone that "the bitch is back" since one figures Davros has never seen The Master as anything but male up to then.

Or is that covered by 'alternate timestreams' too?

If one final thing damns Davros' Revenge, it has to be the sonic sunglasses.  Apart from it being more merchandising junk the BBC will push on eager little fanboys/girls, why...just why?

What was good about The Witch's Familiar?  I found that the idea of a mental battle between Davros and the Doctor is a good idea, and one that did intrigue me.  However, seeing it go off into a 'Davros just needs a good hug' business was not good.

I find Gomez so irritating as the transgendered Master, less serious as a villain and more as almost an anti-hero (given that it was she who came to get the Doctor out of Davros' plan, begging the question of what would have happened if The Mistress had indeed died.  All a little too convenient, mais oui?

Certainly I've seen worse episodes, but The Witch's Familiar did not excite me.  The praise heaped on it puzzles me.  I could understand Kyle Anderson's super-enthused review (he at least gets paid to push anything Moffat comes up with to where if Moffat said the Doctor was Sil's father, Anderson would praise "The Moff" for reinventing a villain he'd call 'little-known or remembered'), but honestly, I don't think I saw the same episode everyone else did.

The Bitch is Back...and I wish to Dear Heaven she'd go (and take Moffat with her).

Next Episode: Ghosts in the Water Parts 1 & 2 (Under the Lake/Before the Flood)