The Underwater Menace of The Doctor 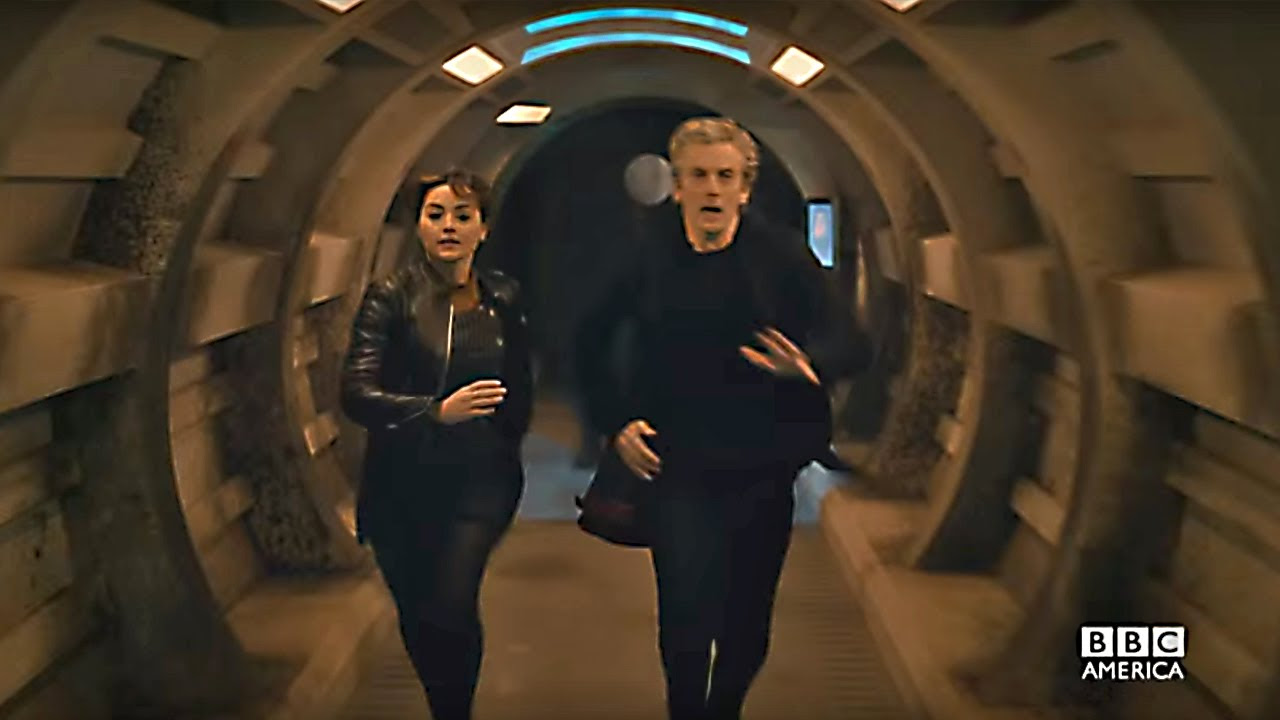 I don't have to read Kyle Anderson's review for The Nerdist regarding Under The Lake, the first of a new two-part Doctor Who story, to know that he raved about it (as he does with just about every Doctor Who story).  In fact, I think the last really negative Doctor Who review Anderson gave was for A Town Called Mercy, two seasons ago.  It's gotten to where spoofing Anderson's ebullient Doctor Who reviews has turned into a hobby for me, seeing how his self-proclaimed 'analytical critic's mind' melts at the merest mention of "The Moff" and his 'genius'.  Yet I digress.

However, since it's a two-parter, it remains to be seen whether its companion piece, Before the Flood, can keep up its good potential.

The Doctor (Peter Capaldi) and his Companion, Clara Oswald (Jenna Coleman) arrive at an underwater base three days after the crew discovered a strange spaceship.  It's even stranger because they are in what was once a city above water where no spaceship should have been in.  The crew has suffered the loss of their captain, Moran (Colin McFarlane) and has to hide out in the base's Faraday Cage to protect themselves from the 'ghosts' that come at night after them, Moran being one of them.  There are essentially two leaders: the deaf Cass (Sophie Stone), aided by her interpreter Lunn (Zaqi Ismael) and the head of Vector Industries, Pritchard (Steven Robertson), who is the company man.  The other, scientists O'Donnell (Morven Christie) and Bennett (Arsher Ali) are pretty much there to keep things going.

The ghosts are about, but what makes it strange is that the original ghost is from a very meek race, so the attacks on the crew are so out-of-character.  Prichard is killed by the ghosts and becomes one himself. The Doctor now comes to realize that they are really ghosts, and that they as ghosts are transmitting a signal through themselves.  Thanks to their capture, Cass is able to lip-read what they are saying, "The Dark, The Sword, The Forsaken, The Temple", and at first it seems so strange.  The Doctor then deduces it is a set of coordinates, leading to the church within the sunken city.  He also dissuades Cass from calling for a rescue ship (despite one being on its way without being sent for) because the ghosts want to kill the crew to strengthen their signal.

The ghosts strike back, unleashing a flood within the base.  As the group attempts to flee, the Doctor says the only way to fix this is to go back in time to find the source of the signal in the church before it was flooded.  The doors lock between two groups: The Doctor, Bennett, and O'Donnell in one, Cass, Lunn, and Clara in the other.  The Doctor's group goes into the TARDIS, and the Clara group waits it out...until they see in horror outside the window into the water, to find a new ghost...THE DOCTOR! 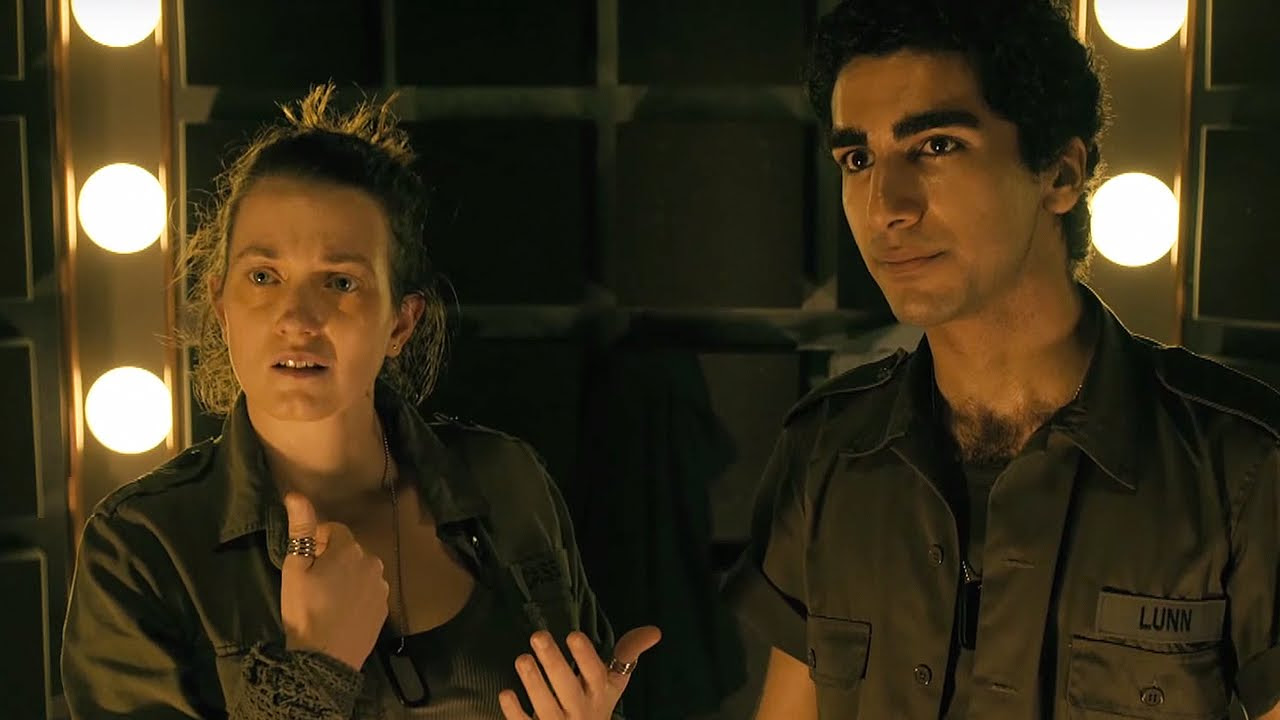 Under the Lake is practically pitch-perfect in a way Doctor Who has not been in a really long time.  Again, we have to go back to the double-punch of Mummy on the Orient Express/Flatine to find a Doctor Who story that works just as well on every level.   The 'base under siege' plot has been used before, certainly a mainstay of the Second Doctor's tenure, but here, it never feels forced or contrived.

It actually has a very strong Alien/Aliens feel, from the claustrophobia to the evil businessman getting in the way of things to the scene where Lunn is about to be killed by the ghosts but is spared.  Curiously, when we get the ghosts to pull back from killing, we find that Whithouse provides a logical reason for it.

Perhaps this is one of the reasons Under the Lake is such a good story: it gives us a logic to everything, even if the Doctor's explanation for the cryptic message is a bit offbeat.  In every step of the story, from the ghost's capture to how the ghosts came to be to working out why the day mode on the base (which is when the ghosts hide) was switched to night and O'Donnell managing to work it back all blends to give the viewer credit in being smart enough to figure things out.

I can digress to wonder why someone wasn't tasked to put the base on permanent daylight time to keep the ghosts at bay, but I'm not going to split hairs.

Another brilliant aspect in Under the Lake is the acting.  There isn't a bad performance in the lot.  I'll grant that O'Donnell plays like a 2119 version of Osgood and I could ask why she was such a big fan of The Doctor, but give Christie credit that this was a small part of her character.  For most of the time, she was the intelligent officer she was meant to be. When I learned that a deaf character was going to be in the story, I was concerned that this was done to show us that actors with physical limitations weren't being given a chance.  How wrong I was, and glad to see how Cass was not a token character to placate some misguided notion of equality.  Instead, thanks to Stone's performance, she was the excellent leader that her character demanded she be.  Soon, we forgot that she was deaf, and while it is important to acknowledge that she is deaf, the fact that it soon became a non-issue is a credit to Stone, Whithouse, and director Daniel O'Hara.

In fact, Under the Lake goes out of its way to cast a wide range of actors who show us what British and American television could do if they opted to cast actors, not ethnicities.  We forget that Lunn and Bennett are being played by actors of Arab and Pakistani heritage.  This is good, because both Ismail and Ali are excellent in their roles: Ismail as the interpreter who is frustrated by Cass' actions in keeping him out of things, and Ali as the somewhat nerdy and cowardly Bennett who appears to take a shine to Clara.  Truth be told, Ali's Bennett was my favorite character: his fear but rising to do what was needed being both comic and heroic in equal turn.

I hope, however, he isn't the newest romantic interest on Doctor Who, despite his good work.

Apart from the positive step in casting non-Anglo actors in what would appear to be Anglo parts, we get perhaps the best performances out of our leads.  Capaldi is in his element as The Doctor, toning down the goofy mannerisms bestowed to him by Matt Smith's interpretation and making The Doctor into a mostly rational, intelligent, authority figure.  Sometimes the comedy is forced and dumb (he needs cue cards to express emotion), but sometimes the comedy actually flows well ("You weren't like this when you met Shirley Bassey", he mutters to himself when thinking out the problem).  Coleman was excellent merely because she for once wasn't the main character.  She behaved like what a traditional Companion should be: the one who asks the questions and helps move the plot along.

It's almost a shame to think how so much time has been wasted making Clara the focus, because Coleman flounders when she has to carry the load with some exceptions (Flatline).  Here, Clara was good, but oddly, we see how well The Doctor can work with better characters as Companions.

What elevated Under the Lake is also the brilliant visual look to it, giving it the creepy look that pushes the fear factor.  Even Murray Gold for once tones things down, making the music effectively minimal and tense.  We even got a logical use for those damn stupid Sonic Sunglasses, which deserves a point in itself.

If I were to fault Under the Lake for something, it is in little things, like the clichéd 'evil businessman' of the Pritchard character (one half-expects Robertson to a.) twirl a mustache and b.) not live out the episode since he's obviously evil and stupid).  Another thing is when it made the O'Donnell character another Osgood.  One wonders WHY she is such a fan, and the story doesn't answer it.

Apart from that, Under the Lake is probably the best episode we've had in a long, long time.  It's a strange thing to find my bete noire Kyle Anderson and myself being enthusiastic about the same thing, I'm an honest critic.

Let's see whether Before the Flood manages to pull things together...or tear it down.