The Immortal Beloved of The Doctor Well, we've come at last to the Series Nine finale of Doctor Who.  Hell Bent sees a lot thrown in to our hour-plus program.  We find that a lot of things have not changed, and whatever big twist that would alter the series we were promised is not there.

The vague suggestion of perhaps the second worst spin-off is though (nothing really tops the idea of a spin-off for the same-sex bestiality of Madame Vastra & Jenny).   Hell Bent does at least one thing it set out to do: so wreck Doctor Who that it is, like Gallifrey was at the end of the now-forgotten (and formerly time-locked) Time War: a total shambles.

The Doctor (Peter Capaldi) finds himself in Nevada, USA, stopping at a 1950s-style diner.  To his surprise, he finds the waitress looks an awful lot like his late Companion, Clara Oswald (Jenna Coleman).  He then attempts to recount the tale of his last visit with his Boss (which oddly, wasn't Face the Raven).

Having found himself on Gallifrey, which is at the very edge of the universe, the Doctor's return isn't welcomed by the High Council or Rassilon (Donald Sumpter) still the Lord President of Gallifrey.  Out in the boonies where that damn barn of the Doctor's childhood is still there, Rassilon demands he surrender.  However, in a 'shocking twist', the Doctor tells Rassilon, founder of the Time Lord race, "Get off my planet".

It's hard not to laugh at a line like that, but there you go.

To the astonishment of everyone, Rassilon meekly goes off to leave the Doctor in charge.  OK, so now he manages to bring Clara just a heartbeat away from death to save her from dying; the Doctor claims he needs her for something, but this is all part of a trick.  The Doctor shoots The General (Ken Bones), who promptly regenerates from a white man to a black woman (T'nia Miller), thus forever forcing Moffat's own warped and nonsensical views on regeneration into Canon (Time Lords are hermaphrodites).  Together, Clara and her Companion go into the Matrix, where the memories of all dead Time Lords are stored.

Well, in the confusion the Doctor and Clara steal another TARDIS which looks like the very first one he had and they travel to the end of time itself, where waits Ashildr/Me (Maisie Williams), the last of the Immortals.  "How are you sustaining it (the reality bubble) by the way?" the Doctor asks her.  "Brilliantly," is her only explanation. 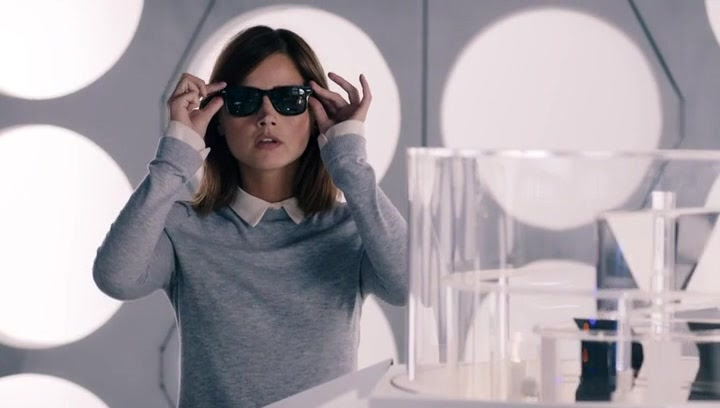 Well, the Doctor confronts Me about being the Hybrid, but Me has a surprise for him.  The Hybrid is really the Doctor and Clara!  They are too much alike, and the joining of two warrior races (Humans and Time Lords) is what will breed the long-feared Hybrid.  Clara in the TARDIS overhears all this, and reverses the polarity through the sonic sunglasses to stop the Doctor from wiping out her memories.  She insists she wants to die with her memories intact.  As we are not sure whether her reversing the polarity worked or not, it's a guess as to whose memory will be wiped.

When they use the device to erase memory together, we find it's the Doctor's memory of Clara that is mostly wiped.  "Clara Who?" he asks, and we go back to Mel's Diner where the Doctor says he can't remember what Clara looks like.  As he is left in the diner, Clara sneaks off to the back, where we find she and Ashildr are now travelling time and space, outrunning the Time Lords who are not pleased to find that Clara is essentially outrunning death.  Unfortunately, despite reading the manual Ashildr a.) can't get their TARDIS to change shape from a 1950s diner, and b.) have the whooshing sound (indicating via Moffat that they too "left the parking brake on").  Well, Clara and Ashildr left a gift: the original TARDIS for the Doctor to go back to, and with a renewed joie de vivre, he goes back to time and space, looking for a new lead character to play second banana to.

I thought I really had very little to say but find that I do have a lot to say, none of it good. Hell Bent is typical Moffat: inconsistent, illogical, and so nonsensical. Just the opening and closing of the episode show just how little thought he puts into things (despite protests to the contrary from his passionate defenders like the Igor to Moffat's Victor Frankenstein, the Dis-Functional Nerd himself, Kyle Anderson).  In the opening, as he plays 'Clara's Theme' on his guitar (and enough with that damn guitar already), the Doctor appears taken aback that the waitress asks the Doctor, "Tell me about her", when he talks about Clara.

At the end of the episode, however, he tells this waitress that he doesn't remember what Clara looks like.

If that is the case, why then did he appear shocked that the waitress (who looks a lot like Clara) should ask about Clara?  He would naturally be shocked IF he knew that the waitress was either Clara or was her doppelganger.  However, given that, if we use Moffat's own writing, he didn't remember what Clara looked like, then why would the Doctor react as though she SHOULD know who Clara was.  If again, we go by Moffat's own writing, the Doctor himself shouldn't know what Clara looked like, so his reaction at the opening of Hell Bent literally makes no sense.

He shouldn't have reacted at all given that if we use Moffat's own writing, the Doctor would have by now have had no idea that the waitress and Clara looked alike, let alone were one and the same.  It only makes sense if you think of the episode happening literally chronologically, meaning that what was meant to be flashback wasn't.

That, of course, is how the majority of NuWhovians would think of it, so to them this really, really weird inconsistency would totally make sense.  I can't think of it that way, so it doesn't make sense.

Also, the idea that Moffat has come up with another outlandish way to essentially not kill off a character and bring her back from the dead is now pathological.  Why is Face the Raven even relevant now, given that Moffat has come up with another 'Get Out of Death' card?  Death has no emotional impact anymore.  In Face the Raven, Clara "dies", but I think all but those weeping over a fictional character knew she'd be back.

However, as galling as Moffat has been in the past, even I wouldn't have thought he'd bring her back as essentially a Time Lord-like being, piloting her own TARDIS, which itself got stuck, not in the shape of a police box, but in the shape of a diner.  This isn't like Leela staying on Gallifrey because she found love (which was bungled in The Invasion of Time), where at least some time was given to the idea of having her on Gallifrey.  This is essentially making this insipid schoolteacher into a time traveler for no other reason than he can.


That goes hand-in-hand with Moffat's stubborn determination to remake regenerations in his own image.  He never showed a regeneration with his Caitlyn Jennering of The Master, so some could have said Missy wasn't really a regeneration of The Master (perhaps The Master stole a body like he did in The Keeper of Trakken).  Now, with the general regenerating from man to woman, Moffat has gotten his eternal wish to make Time Lords change genders.

Looking back at Classic Who, from An Unearthly Child to Survival, when we do see other Time Lords regenerate, they stay the same gender.  Romana stayed as a female, as did Borusa and Rassilon.  There was never a thought to go through transgendered Time Lords because it really would have served no purpose storywise.  The whole idea that The Doctor could regenerate into a woman was meant as a joke, one that I believe Fourth Doctor Tom Baker started and which its last original producer John Nathan-Turner toyed with every so often.

Moffat apparently didn't get the joke, as he has made regeneration less a moment of awe and more a joke.  He gave River Song, conceived by the Power of the Holy TARDIS, the ability to 'regenerate' (despite being human).  He now has decided to make Time Lords a thoroughly transgendered community (despite his own dismissal of such thoughts with his "I'd like the Queen to be played by a man" crack).

What really shows how Moffat simply doesn't get regeneration is that we saw with the transgendered General what Classic Whovians, those who fiercely oppose the idea of an intersex Doctor, have feared would happen: nothing good.  The General changed from man to woman, but was exactly the same person.  There was no regenerational confusion, no period of adjustment, and worst of all, no change in personality.  She was exactly as He had been before.

Given that The General was no different, what difference did it ultimately make that He was played by a woman?  None.  There was nothing important, interesting, or relevant about the sex-change, save for Moffat showing he could do such a thing because he damn well could and no one could stop him.

﻿﻿
Let's say that Moffat gets his wish and gives the part of The Doctor to a woman.  Those who clamor for 'equality' will cheer and say 'it's about time'.  Well, what next?  Milton Berle, no stranger to drag, made an interesting observation.  He said that you get a good laugh out of appearing in a funny costume.  OK, he then added, what next?  You have to carry on with the scene in that costume.  What justification can you give the audience to keep the gag going apart from the initial laugh?  A funny costume can work for a long scene (I Love Lucy being a master at this) or for a whole movie (Some Like It Hot, writer/director Billy Wilder observed, was basically a five-minute burlesque sketch stretched to two hours, but the joke being that EVERYONE was taken in by something so patently obvious).

What will you do once you make the Doctor into a female (the possibility now having become all but inevitable)?

Circular arguments to justify making a major change to appease a sense of 'equality' is no reason to make that kind of radical change.

One last point.  Hell Bent shows Moffat can't even keep continuity within his own writing.  We see in the Matrix (which was admittedly well-filmed, with the Wraiths floating by) a Dalek trapped there.  "Exterminate...me", he says.  Well, remembering from Davros' Revenge Part 2 (The Witch's Familiar), a Dalek can't plead to have someone/thing kill it.  When it appears to say, "Exterminate...me" as a plea to end its suffering, we know (or should know) it really is attempting to reload.

Hell Bent is more than awful (which it is).  It's sad, just sad.  It's sad that there are people like Kyle Anderson who look past all its illogic to sing praises to "The Moff".  It's sad that so many fans turn off their thinking to support a collection of events that cannot be tied together.  Most of all, it's sad to see a show that I was passionate about, that I truly loved, now just be something I simply don't care about anymore.

Next Episode: The Husbands of River Song