The Ruffled Feathers of The Doctor

As a longtime Doctor Who viewer, I think that Clara Oswald is perhaps one of the worst Companions, fitting given how awful Doctor Who has become.  When once I eagerly looked forward to Saturday nights, now I simply could not care whether or not this particular Companion (who finds herself near the top of my Ten Worst Companions List), actually died.  I'm suspicious about whether the character has actually died, given how Steven Moffat won't ever kill someone off permanently.  How often has someone come back to life after apparently dying (just this season alone we've had Clara and the monstrosity called Missy 'die' and come back, and then there was Ashtrid/Me following suit).  Face the Raven is billed as the Doctor Who episode that actually kills off a Companion (the first Companion death since I think Adric back in the Peter Davison era).  Yes, we've seen Companions die on NuWho, but they haven't stayed dead.  This time though, Companion Clara is not just merely dead, but most sincerely dead.

Face the Raven actually was a bit moving regarding her death.  It could however have been better if they had a.) found a better way to get there and b.) not tried so desperately hard to make me care.

Clara (Jenna Coleman) and her Companion (Peter Capaldi) receive an urgent call from Rigsy (Joivan Wade).  He is highly upset because he has a tattoo...which he doesn't remember getting and worse, which is counting down.  Supernatural in nature, the Doctor tells Rigsy it's a countdown to his death.  Rigsy is horrified (which he is a lot throughout the episode) and now it's time to try and save him.

For this, the Doctor and his boss go looking for a Trap Street, in this case not proof of 'copyright infringement' but a hidden world of aliens within London.  Eventually they do find Diagon Alley...I mean, the Trap Street, where Rigsy's appearance is not welcome.  It seems he committed murder.


In charge of this 'alien refugee camp' (would the Syrians go there, I wonder) is Mayor Me (Maisie Williams).  She tells them that because Rigsy was standing over a body that was lying apparently dead, he so obviously killed Anna, this beloved alien who is a Janus (someone with faces on both sides of her head, being able to see the past and future).  Obviously, the fact that a man who was essentially unwittingly lured to a place at 6 in the morning, who had his memory and phone wiped of all information, and who had never been seen before by any of these creatures is obviously guilty and given a death sentence.

That makes oh so perfect sense.

Well, it's a mystery, and Clara & Company want to save Rigsy, but the Doctor doesn't trust Me.  Mayor McCheese gives her word that Clara will be under her personal protection and no harm will come to her.  With that, we try to solve the Mystery of Anna.

Rigsy's tattoo is a quantum shade, where at the end of its countdown an avenging angel of death will kill the wearer.  In this case, the angel of death is in the shape of a raven.  We've seen what it can do when it kills an old man who is really a Cyberman who had stolen medicine for his equally old wife.

﻿﻿﻿﻿﻿
Well, as it stands the Doctor in his own words tells us to 'forget about finding the real killer", we need to do something.  Clara turns into Blair from The Facts of Life and gets one of those 'brilliant ideas'.  She gets Rigsy to pass the time tattoo on her with the idea that it will save him and do her no harm as she is under Mayor McCheese's personal protection.   Bad move: we discover after interrogating Anna's daughter (who is disguised as a boy) that Anna may in fact not be dead.

No matter: because Clara willingly took the tattoo there is nothing Me can do and thus Clara must die.  All this was a very elaborate trap for Clara's minion, who at the end is teleported to some world at the behest of mysterious forces whom Me is working for.  Clara meets her end when she faces the Raven.

Say what you will about Adric, at least his death was a noble one, sacrificing himself to save others.  This cannot be said for Clara.  She died not because she was willing to sacrifice herself, but because her ego was large she thought she had outwitted Death itself.  I liked the fact that we were given proper warning (The Raven cannot be completely cheated), so Clara's elaborate plan to save Rigsy did as my friends say, "backfire on me".

My main problem is in the set-up.  All this seems rather convoluted in order to lure the Doctor into Diagon Alley (and anyone who claims this hidden world isn't a rip-off of Harry Potter is just an idiot).  Me could have found a faster and less elaborate way to get the Doctor into this trap.  It also makes me wonder what Rigsy had to do with anything.  Apart from being the catalyst to get things rolling he played no part in the story.  It could have been anyone really: we could even have gotten Adrian from The Caretaker back for all the emotional impact or relevance to the plot Rigsy played.

I'm surprised that no one ever said, "Well, since there was no murder, you can't condemn someone to death for NOT killing someone".  Oh well. 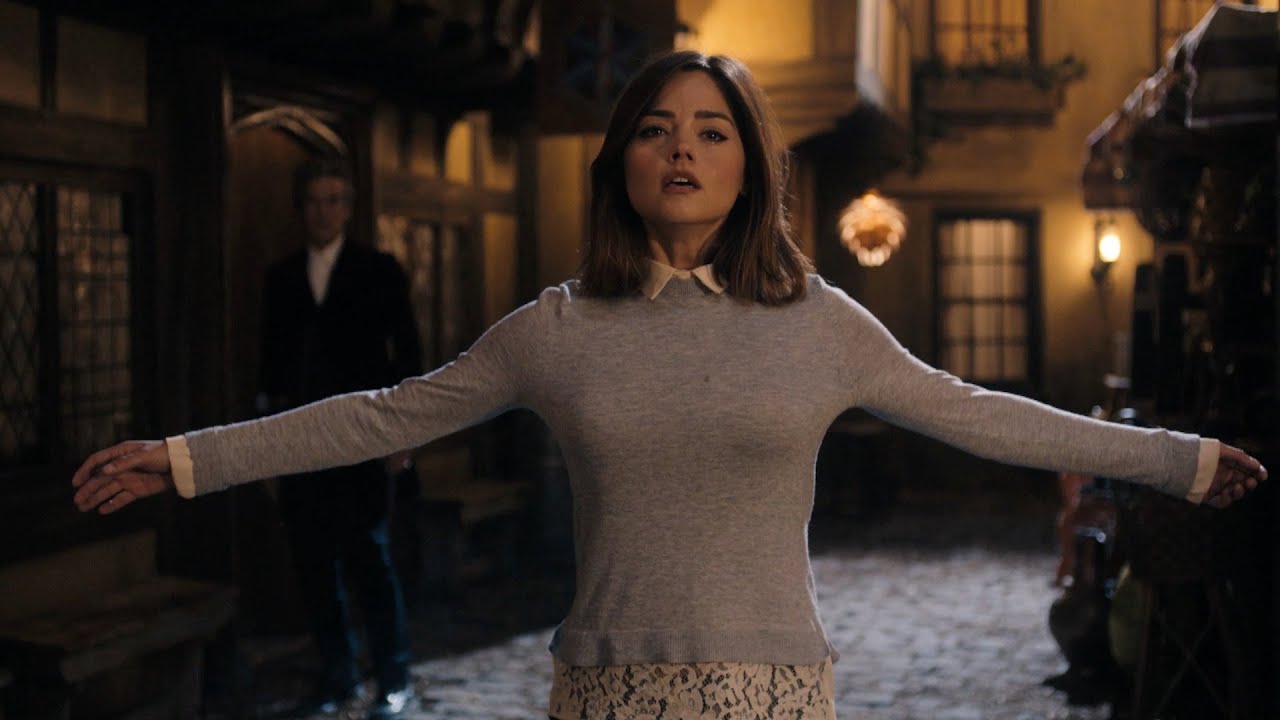 I think that whatever emotional impact Clara's Death may have is lost due to Murray Gold's penchant to overscore everything.  This is in keeping with Doctor Who's idea that the emotion cannot come straight from the performances or the story.  We need musical cues to tell us how to feel.  Still, I can see why Clara's Death made so many Whovians cry.  It was much better than I thought it would be, pulling those emotional strings that make many an idiot sob, so kudos for working in emotion into this.  I just wish Clara' weren't such a know-it-all, or that the Doctor appears to turn to HER for information;  was all that jazz about 'the trap street' meant to show she was smarter than the lead?

It also would have been nice to see Clara sacrifice herself because she cared, not to show off.  If she had taken Rigsy's tattoo because she wanted him to live to see his newborn daughter grow up, THEN that would have been a great farewell.  As it stood, it was, well, not as moving.

As a side note, what is IT with all these NuWhovians crying their eyes out at all this?  Are they all this emotionally weak they can't handle a Companion moving on?  Bad enough when they cried at Smith's regeneration, but this?  Dear Sweet Mother of Mercy...no wonder ISIS is winning.

Speaking of Smith, I thought that the Doctor's inability to realize that Rigsy "made this little human" (meaning his daughter) was something Smith's idiot Doctor would say, not perhaps Capaldi's grumpy one. It's curious that Jon Pertwee's Third Doctor was perfectly capable of understanding humans, but post-Tennant they seem unaware of how things work.

It was pretty well-acted and pushed me to feel so much for them, though I couldn't.  The more I think on things, the more I am reminded of Edgar Allen Poe. If asked if I will watch Series 10 of Doctor Who, to quoth The Raven, "Nevermore".