The Veiled Threat of The Doctor

There is a reason Doctor Who has a Companion.  In the past, it was to have someone The Doctor can talk to, to serve as the audience and ask the questions we as the audience need answered.  In this incarnation of Doctor Who, the Companion has long been the main character.  Over time, this has proved to be a disastrous decision (one of many Steven Moffat has made), as it turns each Companion into this 'extraordinary being', one whom the show wraps itself around.  Instead of being a simple science-fiction show about an alien time traveler and his Associate(s), it's turned into The Rose Show, Martha: The Series, The Donna Follies, The Amy & Rory Comedy Hour, The Adventures of Super-Slut River Song, and The Clara Chronicles.

Heaven Sent is the first Companion-free Doctor Who since the Fourth Doctor story The Deadly Assassin in 1976.  As such, it is essentially a one-man show.  I've thought Peter Capaldi has the potential to be a great Doctor.  However, it's always the scripts that let him down, and let him down hard.  Now, I know many, including my bete noire Kyle Anderson, hold Heaven Sent to be a 'stone-cold classic', one of the thousands of Citizen Kanes of Doctor Who.

I however, remain unconvinced, though Heaven Sent certainly has a few things to recommend it.  The idea that Heaven Sent is beyond brilliant is one I find laughable.

The Doctor (Capaldi) has been teleported to a strange and spooky castle, where he is being pursued by a strange creature which is called The Veil.  As he tries to solve this mystery of where he is and what The Veil is, he finds himself seeing and being guided in his inquiry by visions of his late Companion, Clara Oswald (whom we see at the very end, most of the time only her back is shown).  The Doctor realizes The Veil stops from attacking only when he gives a Confession, such as when he says "I didn't leave Gallifrey because I was bored.  That's a lie.  It's always been a lie".  He left because he was scared.

Well, as time goes on...and on...and on...he makes the best of his situation, though the results are always the same: he manages to evade The Veil for some time, finds a wall 20" thick made out of diamond, and starts punching away at it until The Veil zaps him.  However, this doesn't kill him outright, but gives him about two days (conveniently) to crawl to the chamber and get himself returned, where we start All Over Again.

Eventually, after well over two billion years, he finally punches his way out of this place, which we discover is his Confessional Dial.  Once he leaves it, he finds himself in a familiar place: Gallifrey itself. 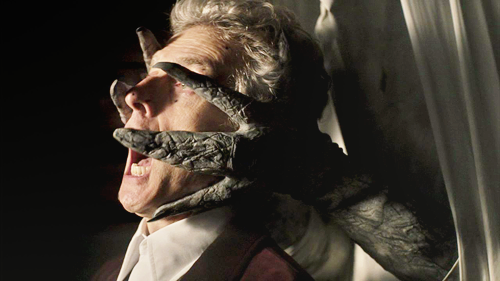 At first, I was going to be much more negative towards Heaven Sent than I eventually became.  I was talked into seeing the more positive aspects of this story.  I already had at least one high positive with regards Heaven Sent, and that was its cinematography.  This is certainly one of the most beautiful-looking episodes of the season, and Rachel Talalay deserves high praise for how well she filmed Heaven Sent.

I also give credit to Capaldi.  Given how he essentially has to act with himself alone, he managed to make one not take too much notice that there was basically no one around.  Yes, he did have The Veil (a rip-off of The Ghost of Christmas Future in my view) and two brief moments when Jenna Coleman's Clara makes an appearance and when a young boy is told by the Doctor in Gallifrey to run to the Capital and tell them he's back, coming 'the long way round', but for all intents and purposes he has to hold the audience's attention.  Capaldi does that, making the Doctor's monologues seem mostly rational and not the babbling of a loon.

Mostly, for whenever he sees writing on the chalkboard, it does make him look bonkers and is derivative of Listen (another 'Citizen Kane of Doctor Who') when there was writing he wasn't aware of.

What I find amazing regarding all the high praise Heaven Sent has gotten is that Moffat is essentially retreading what we've seen before.  "My work is finding Room 12", the Doctor says.  Let's go back to the Eleventh Doctor's 'instant classic' The God Complex.  There, he finds his greatest fear is in Room 11.

Moffat must think NuWho fans really are majorly stupid (and I suspect the majority of them are, non-thinking entities who swallow every twist no matter how irrational or contradictory, who never question the logic of anything Doctor Who-related, who go so far as to criticize someone for complaining about the lack of logic on the premise that Doctor Who ISN'T suppose to make sense, that it gets a pass from things like continuity or basic logic).  I'm not sure why Doctor Who writers enjoy writing down to people (apart from the fact that they can).  In The God Complex, he's The Eleventh Doctor (but the Thirteenth Form, in self-proclaimed analytical critic Kyle Anderson's own terms), therefore, his greatest fear has to be in Room 11 (how clever Toby Whithouse is).  In Heaven Sent, he's The Twelfth Doctor (but in Fourteethn Form, if we follow Andersonian logic).  This is why his search has to be for "Room 12" (how clever Steven Moffat is).

I for one am not impressed at how simplistic this "room" business is.   I do find it indicative of how poor Doctor Who is now. I also find a lot of other things to be bad about Heaven Sent.  Over two billion years in one place.  It sounds an awful lot like The Time of The Doctor, where he was stuck on Christmas for hundreds and hundreds of years.  Oh, why not...we've got nothing but time.  I know the Doctor felt bad about Clara's death (even if was a result of her own stupidity and arrogance), but for Heaven's sake, I've never seen him whine so incessantly about any Companion as much as he has about her.  He's seen many Companions go, sometimes quite tragically (Katarina and Sara Kingdom in The Daleks' Master Plan, Adric in Earthshock), but while he mourned, he wasn't going to tear Heaven and Gallifrey apart just to save them.  In fact, he made it clear in Adric's case that his death is a fixed point in time that cannot be altered.

Granted, this version of Doctor Who doesn't give a damn about 'fixed points' (that whole Time War thing was a fixed point in time, wasn't it?), adding or dropping it at a plot's convenience, but why do we have to go on and on about Clara?

We have this idea that The Confessional Dial is opened only at the day of a Time Lord's death (something 'ancient' introduced this season) and that the Hybrid is an ancient legend (something introduced this season).  Well, now that the Doctor's emerged from the Confessional Dial, does this mean he'll finally die?  So he's the Hybrid.  OK, I don't care.

It is nice that Moffat has become so power-mad that he now blew up with one 'confession' what had been Canon since the Second Doctor in The War Games (for those BIG-TIME Doctor Who fans who can't be bothered to see anything pre-Rose, that was when he said he left Gallifrey because he was bored). Oh well, again I don't care.

Heaven Sent is beautifully filmed and solidly acted.  Everything else is rubbish.  I know many of my fellow critics (and Anderson, who is to critics what smoking is to lung health) think it among the Greatest Moments in Television History, a turning point for the medium.  I see it as another in a long line of bad Doctor Who episodes, one that won't be watched and beloved in the future.  Admired perhaps, held as something extraordinary perhaps, but just another really poor example of how one man's ego (fanned by sycophants like Our Andy) destroyed everything we loved.