The (Other) Woman Who Ended Segregation: Rosa Review 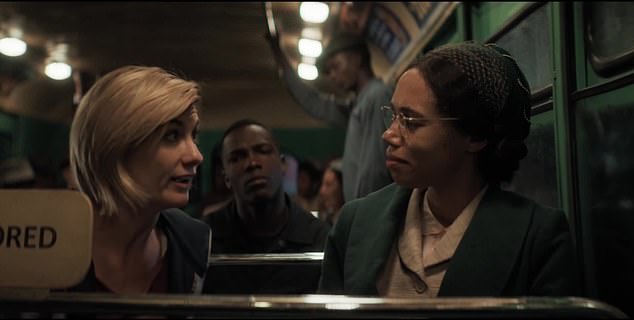 Rosa Parks was an icon. She deserves better than Rosa, a story that while mercifully does not trivialize Mrs. Parks' defining moment of courage, does make her almost a side character.

As if the others weren't already bad enough.

13 (Jodie Whittaker) is attempting to take Her 'friends' Graham (Bradley Walsh), his step-grandson Ryan (Tosin Cole) and random person Yasmin Khan or Yaz (Mandip Gill) back to their time and place in Sheffield, but the TARDIS has a mind of its own. It insists on materializing in 1955 Alabama; here She detects traces of artron energy, the type of energy that the TARDIS or any time-travelling device emits.

Why here, why now, and why does it center around a middle-aged black seamstress named Rosa Parks (Vinette Robinson)? Obviously, almost all of them know who Rosa Parks is, though Ryan is a bit confused.

Alabama is no place for Ryan or Yaz. Ryan is instantly slapped for touching a white woman when offering to return her glove, and Yaz is constantly called a 'Mexican'. This sparks them having to receive as much overt racism as they do in Sheffield, where later in Rosa they reflect that he gets stopped repeatedly by police more than his white mates and she is called a 'Paki' and a terrorist when she goes to mosque.

As a side note, I am of Mexican descent, and Yaz would not convince me she was Mexican. Just saying...

Anyway, Graham and Her use their own 'white privilege' to make sure Mrs. Parks' moment in history is assured. That won't be easy because of Krasko (Josh Bowman), a time-traveler from the future who looks like a Grease cosplayer.

Costco is determined to stop Rosa Parks from getting on that bus, which in turn would stop her from refusing to give up her seat and thus, stop the American Civil Rights Movement.

Crisco cannot kill her outright, as She learns that after being released from Stormcage Prison he had a neural restrictor that prevents him from doing harm.

Why this alien from the 51st Century would be fixated on stopping Rosa Parks is unclear. Krispy Kreme does tell Ryan later on something about stopping "your kind" from getting above themselves, but Costco's overt racism is left unexplained. We don't know anything about his motivations but we need moral lessons, logic be damned.

13 gives them tasks to do in order to make sure Mrs. Parks completes her moment in history. It involves stopping Krispy Kreme (which Ryan does by using Crisco's own device against him), Yaz sticking by Mrs. Parks and poor Graham ultimately doing what I expected him to do: be that 'white passenger' for whom Mrs. Parks refused to stand for.

Everyone essentially congratulates themselves on making sure history stayed the course and She takes them, after giving them a rundown on Mrs. Parks' life post-bus, to Asteroid 284996, also known as 'Rosaparks'.

After finishing Rosa, I genuinely could see cowriters Chris Chibnall and Malorie Blackman congratulating themselves for their episode. I know many people reported crying at it, though to be fair most NuWhovians cry after every episode, so that's not a big thing.

These same NuWhovians also reported on how 'brave' and 'important' Rosa was. They are free to think that.

My own take on it was that Doctor Who was doing a very weird take on Back to the Future or Quantum Leap, because this is not Doctor Who. It isn't even a good Quantum Leap.

For those not old enough to remember, Quantum Leap was a show about a scientist who could travel in time within his own lifetime, almost always to help someone and/or keep a moment in history from altering. Along the way, he meets people who would become famous later in life. Dr. Sam Beckett, the main character on Quantum Leap, accidentally saved Dr. Heimlich by using the procedure he himself created and offered financial tips to a young Donald Trump.

Rosa has that same feel, only it was both unoriginal and predictable, two things Quantum Leap was not.  I know Chibnall, who is also Doctor Who's current showrunner, wants the show to be more 'educational', and many online tout Rosa as being something to be shown in history classes.

If it were shown to mine, I imagine most of us would be bored.

The primary issue with why Rosa is not good is that we know Mrs. Parks will end up on that bus. As such, there really is no suspense. Whatever roadblocks Crisco sets up are quickly dispensed, as is he. To its credit, Rosa at least did not have Her or the others 'inspire' Mrs. Parks, but as I predicted it did thrust them into being the cause with Graham.

There is just so much wrong with Rosa. Whittaker has struggled with the part of The First Female Doctor, primarily because she cannot find herself able to get away from doing a David Tennant/Matt Smith impersonation.

At one point She draws on the wall. Graham tells Her She can't do that. "You're not Bansky," he says. With a comical look She says, "Or am I?". This is something Tennant's Doctor would say, delivered in the same way Tennant would. Whittaker's Doctor is fast becoming annoying and grating. She's had three episodes to give us her own take on The Doctor, but she keeps slipping into 'forced wackiness'. 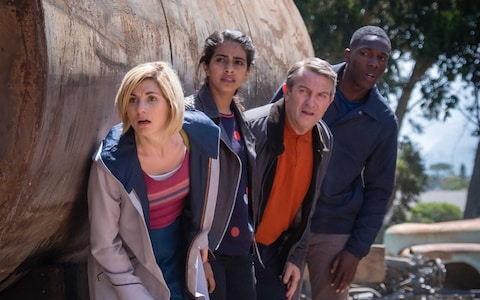 Cole's Ryan is so dim and colorless, where even his 'enthusiasm' at meeting Dr. Martin Luther King, Jr. or zapping Krispy Kreme into who-knows-when comes across as emotionalless.  At least here Gill's Yaz had something to do and didn't seem just like the third wheel.

Bowman's Krasko was so undefined he will rank as one of the worst villains on Doctor Who--revived or original series. Robinson's Parks was slightly better but she had the worst Southern accent I've heard on Doctor Who since The Gunfighters. Her Rosa Parks was almost incidental to Rosa, and I found her flat and uninteresting too.

Granted, I was not alive at the time, but there felt something almost cartoonish about how everyone in Montgomery was so overtly racist. It had the subtlety of a sledgehammer, suggesting all white people were racists slapping random black men and stalking 'foreigners' left-right-and-center.

The only good performance was Walsh, which is a surprise given that he is known mostly as a game show host (his show, The Chase, curiously airs opposite Doctor Who, making him the rare person to have two shows compete against each other). When interacting with the locals or dealing with 'Doc' to his sadness at being the 'white man who forced Mrs. Parks into history', Walsh manages to create moments of humor and pathos.

Rosa also has a terrible disservice when it comes to the score. In the past, Segun Akinola's music was subtle and effective. Here, it looks like he was ordered to do his version of a Murray Gold score. Whenever we saw Rosa Parks, we heard "noble" music, all lofty trumpets. Whenever we saw Krasko, we heard "evil" music, a two-note number created by cellos or bass.

Even worse, we were treated to Rise Up from Andra Day as Mrs. Parks made her fateful decision. I don't think it's a bad song, but it does lay on the 'inspirational' bit far too thick. I also thin something more contemporary would have worked better, such as Move On Up A Little Higher by Mahalia Jackson.

Rosa is a disservice to Mrs. Parks. That everyone involved thought it was a tribute to her seems worse. Uninteresting villain, no tension or suspense, a bad cosplayer as The Doctor, flat Companions save the old guy, a bit heavy-handed and ultimately dull.

Noble intentions do not make a good episode.

Next Episode: Arachnids in the UK
Posted by Rick at 5:23 PM